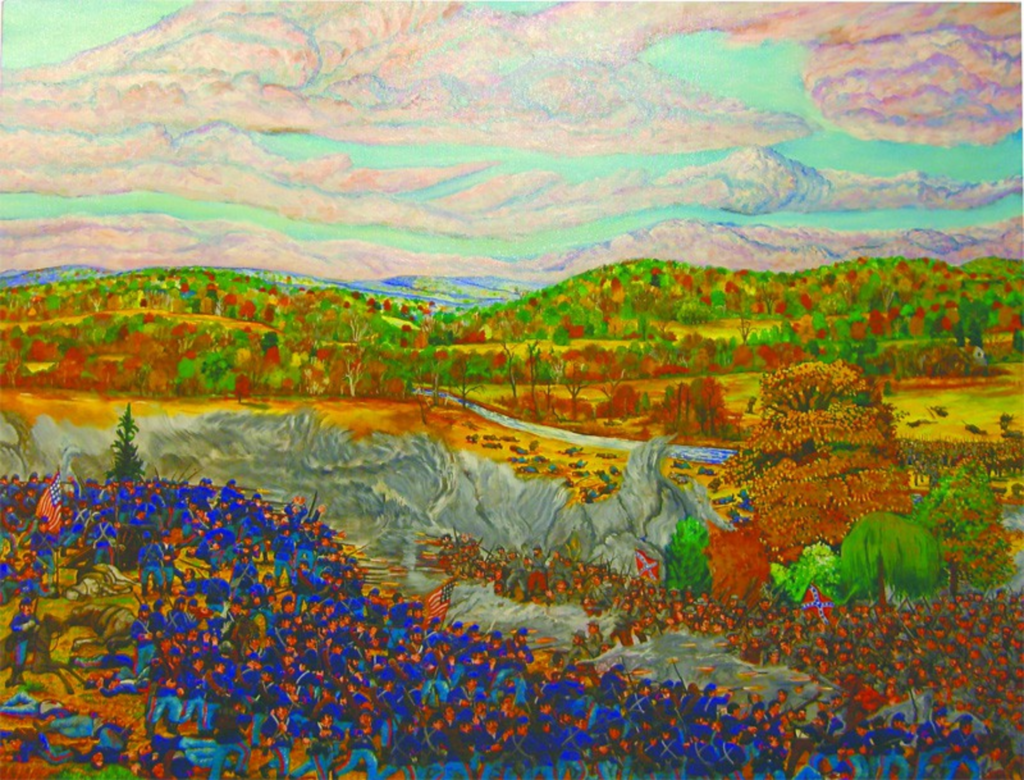 The phrase outsider art is well-accepted terminology for work by creators who toil beyond mainstream artistic channels, though it also conveys a vaguely disdainful connotation of otherness, a certain “You ain’t from around here, are you, boy?” But the Diagnostic and Statistical Manual of Art Critic Terminology lacks a category for Knob Noster painter Harlan Bonar. Late Show Gallery owner Tom Deatherage calls him a “Visionary artist” in such a way that you can hear that capital V. The work Bonar has exhibited in previous shows has included historical dioramas, religious imagery and fiery biblical scenes. His latest is a series of American Civil War paintings so vivid, they often approach the hallucinatory.

Bonar evinces a deep knowledge of the period, both within and between the lines. The autumnal palette of “The Battle of Antietam: Burnside’s Bridge” is season-appropriate for a mid-September skirmish. Here are hundreds of figures, the viewpoint from behind the Union line looking across a sea of men, their uniforms as meticulously detailed as the topography and the clouds and the surrounding foliage, all evoked with dense brushstrokes. The golden-hour light, the attention to minutia, the crazy amount of work Bonar lays into the canvas — these things all speak more about the artist than about the period, and loudly. Because no observer alive can offer a firsthand account from the mid-19th century, any interpretation is, by necessity, fiction based on fact.

So, ultimately what matters is the way you’re telling the story: Does it have a singular voice? Does it convince? With regard to this series of illustrative Civil War paintings, the answers are, “Yes, with a vengeance,” and “Kinda-sorta.” Bonar’s sweep, his scope, his undulant composition, the cumulative effect of his thousands of itty-bitty details — these add up to a strong sensibility more than they do a style.

If many of these works fall short of convincing on historical merits, it’s not for lack of rigorous observation — the man has done his homework. It’s because Bonar is possessed of a heightened vision, an apocalyptic perspective that leaves no room for the sweaty, workaday banalities of soldiering. His voice is more like that of a millenarian preacher whose Sunday sermons are full of burning, wrath and the Revelation of John. In “The Battle of Kennesaw Mountain,” Confederates charge the remains of a farm or a ranch as massive armies collide in the distance at the foot of the mountains. Smoke rises from the burning woods that climb up into the hills. It could be the end of the world; in 1864, it might have felt like the end of the world.

In “The Battle of the Crater,” Bonar depicts more wide-angle carnage, a flood of blue-­uniformed troops spilling into Confederate forces, the battlefield blood red. The trees are broken, and mortars explode throughout the scene. Beams of sunlight radiate through the clouds and across the landscape like the terrifying majesty of God. Bonar expends as much energy on the sky as on the foreground scene. The clouds, rendered in improbable shapes, appear distinct and almost solid, skewing perspective. The sky confronts the viewer as immediately as the foreground, as if the armies might clash as easily in the sky as on the soil.

Not to put too fine a point on it, but the fervor of some Civil War obsessives sometimes invites the question of whether they think the war was, uh, settled correctly. Bonar puts that question to rest with his painting “Quantrill’s Raid on Lawrence,” depicting the rebel ambush on pro-Union Lawrence, Kansas, in August 1863. In the image, Confederates pull Jayhawkers wearing nightclothes (or less) from their beds into the street, beating and shooting them. The storytelling here evokes wartime propaganda, grasping for the levers of political outrage the way certain catchy war ballads were constructed to incite. It is an extremely melodramatic painting, in the manner of damsels tied to train tracks; it suggests that Bonar wants you to consider buying war bonds to support Lincoln’s army.

In striking contrast is the sensitive, understated “Confederates in Camp,” in which Bonar bucks the wide-angle viewpoint he favors to instead present a more intimate view of individual figures — if you can call a painting of 17 men intimate. A contented soldier snoozes near the fire as his compatriots are smoking pipes and chatting. An aristocratic-looking man in a black suit and a top hat attends to the conversation while a boy in the background plays a fife. Other than his pensive Lincoln portrait, it’s the quietest of Bonar’s Civil War paintings. But these are the exceptions. The short focal length of Bonar’s burning, grand-scale vision contains multitudes, even if it is only peripherally engaged with history.