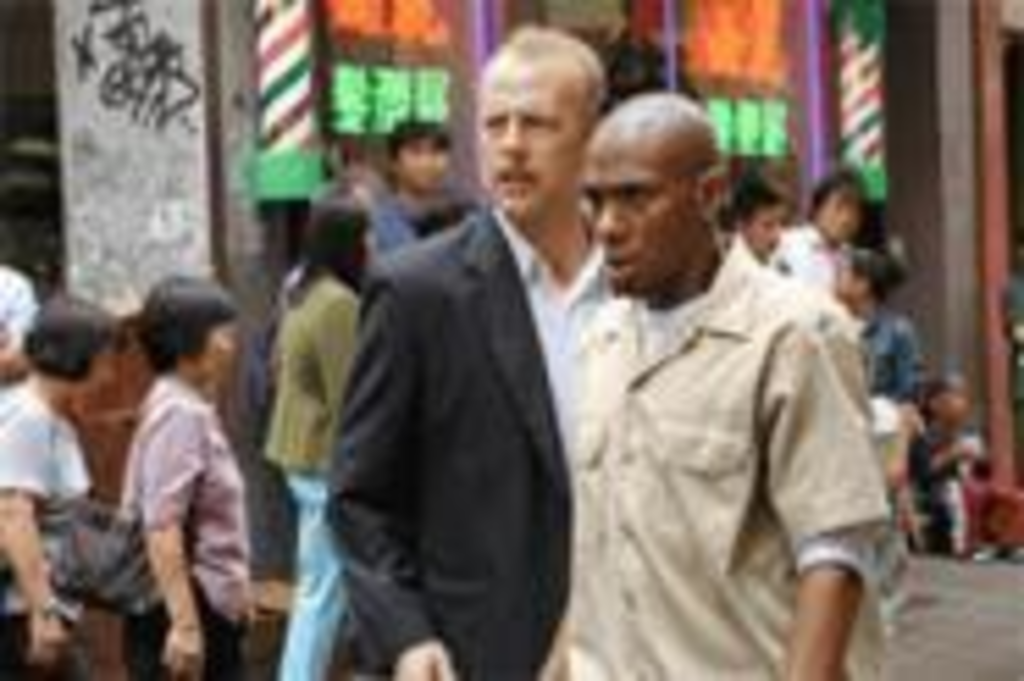 Didn’t Richard Donner retire? The director, a star in the 1980s, is one name among many that should now send bolts of discouraging dread down your spine. But Donner may well be seeing his filmmaking skills peak with 16 Blocks — even if saying it’s his best, least flatulent, most efficient film is tantamount to saying that the guy’s work usually makes me want to step in front of a speeding semi. Donner’s usual style exemplifies the smirking, post-Spielberg big-budget brain rape. Only he and his producers, their eyelids clamped open, should ever have to re-endure the uremic corpus he squeezed out between Superman (1978) and Lethal Weapon 4 (1998).

In his dotage, however, Donner has abandoned his Six Million Dollar Man-trained blunt-force-trauma to bend with the flow of the DV-era river. He keeps his new movie relatively small-boned, hand-held, on-location savvy and free of in-jokes.

Even so, 16 Blocks manages to be a rather mawkish cliché engine. That it’s pleasantly sufferable is thanks to the tight pacing built into Richard Wenk’s real-time screenplay. The stereotypes and borrowings come thick: Broken-down, gimpy, alcoholic detective Jack Mosley (Bruce Willis) — even the character names are recycled — is instructed at the end of his slouching night shift to escort a prisoner to the courthouse to testify, but the titular stretch of congested downtown Manhattan is immediately turned into bullet-sprayed mayhem as grungy, Orc-like bad guys hit the streets with combat ordnance to take out the witness. The “kid,” Eddie Bunker (Mos Def), saw some cop do something, and for the next hour and a half, nearly every member of the rampagingly corrupt NYPD breaks every law in broad daylight just to take down the punk. Perhaps inadvertently, 16 Blocks is the most cynical portrait of New York City cops anyone’s dared to make in years; the thrust here is closer to Serpico-style ’70s than post-9/11 genuflection. Typical of Donner’s work, sensational plot machinations seem to have overruled any consideration of reality, responsibility or even thematic message. 16 Blocks isn’t saying anything about the city’s force, but of course it is. Whatever Donner’s intention, a man this deep in a career littered with half-thoughts and cheap shots should be careful where he parks next time he visits New York.

Little more than a remake of the sorry Clint Eastwood vehicle The Gauntlet (1977) — without the Frank Frazetta poster art and Sondra Locke’s pallid kvetching — 16 Blocks is built like a noir (shades of Richard Fleischer’s great, pungent 1952 micro-crucible The Narrow Margin). But even though it is, by today’s measure, compact and immediate in terms of structure, the film is also far more bloated and self-important than its own story allows. Real B-movies don’t have 14 producers. Clocking in at 99 minutes, Donner’s film should’ve been at least 20 minutes shorter still — whenever Def’s wisecracking victim starts wistfully talking about his plans to open a birthday-cake bakery, the movie lifts its heavy foot off the pedal and drops into a narcoleptic nap.

The massive mush factor is no surprise — particularly the way it’s used to demonstrate to us that Def’s weaselly character is worth rescuing because he likes kids and tells jokes to old people. But Def’s nasally cartoon whine makes one pine for the yesteryear of Locke’s strident bitchiness. Willis, for his part, is acting his age (conspicuous paunch and all), but in the familiar, slow-burn, wincing-soap-opera manner that seems acceptable for American movie stars, so long as they’re not partnered up with a real actor and asked to muster genuinely persuasive moments.

Credibility is already an endangered concern in Hollywood; you wouldn’t think that, to keep a corruption-trial witness from reaching the stand, a detective would run down a busy street during the morning rush hour and wildly shoot out the tires of a crowded city bus. But if you were hunting for verisimilitude, we wouldn’t be having this conversation.