A layman’s review of Hamilton in Kansas City 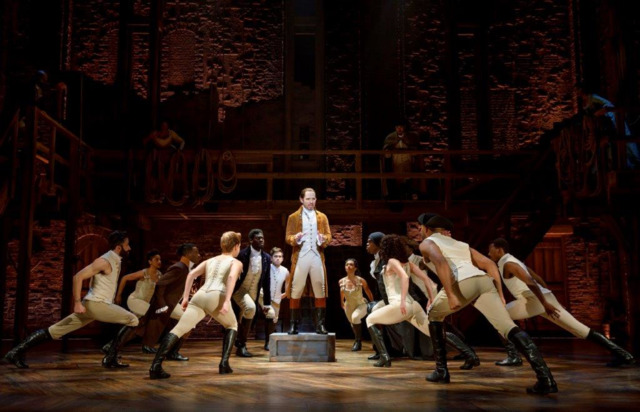 Before walking over to the Music Hall on Wednesday night, I wrote down everything I knew, or thought, or had heard about Hamilton, which opened in Kansas City on June 18 and runs through July 7. I tried pretty hard, and this is what I came up with.

-It’s about how Hamilton got on the $10 bill

-Hamilton was in a duel with Aaron Burr

-It’s probably a parable about America and also probably about race, too

-Raps about democracy that sound like the Fresh Prince theme?

I take no pride in this list. As the editor of a culture publication, I should know more about a cultural phenomenon like Hamilton. Well, I’m sorry. I didn’t. I do now. And I really liked Hamilton. Turns out, it’s great!

Before you complain that I, a dipshit who doesn’t regularly attend musical theater, is reviewing the most successful play of this century, let me just note at the outset here that neither of The Pitch‘s usual theater critics were available; one’s out of the country, and the other was busy (and just saw Hamilton in Chicago a few weeks ago). Also, is there anything left to say about Hamilton that hasn’t already been said? I Googled “Hamilton the musical” a few days ago and was legitimately scared by the amount of information that search returned. It has its own Wiki! So, I figured maybe an ignorant layman’s perspective on the play might be a fun way to cover this. Also: I wanted to see Hamilton. Sue me!

♠ None of the original Hamilton cast members are touring with this production; most of them have been gone for a few years now. At the Music Hall on Wednesday, Alexander Hamilton was played by Joseph Morales, and Aaron Burr was played by Nik Walker. From where I was sitting in the left loge of the Music Hall, Morales looked like Miranda, and Walker looked like Keegan Michael Key, from Key & Peele — powerful bald presence, very athletic. 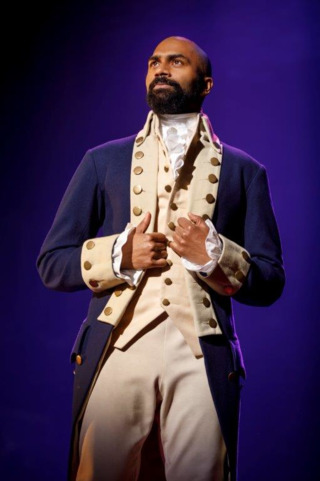 ♠ The cast is almost entirely non-white. I didn’t even know this. It definitely makes the play more interesting. The only white person (that I could see) was King George, who’s played as an over-the-top Brit dandy by Jon Patrick Walker. The King’s songs, which taunt Hamilton, George Washington, and others who dared to defy England and form their own country, received the biggest laughs of the night. He’s a fancy boy, the king.

♠ It’s not all raps, as I thought. It’s a mix of a lot of styles of music: pop, rock, soul, traditional show tunes, and, yes, lots of hip-hop. The King’s song was a bouncy Britpop thing that reminded me of the Zombies’ “Care of Cell 44.”

♠ Early on, I was afraid that I was not going to be able to understand a single word of this play. The sound and acoustics were perfectly fine from my seat, but I just couldn’t keep up on those first few songs, which were largely raps. There’s not much in Hamilton that isn’t sung or rapped, but eventually they slow the musicality of it down a bit and let you get your bearings. Then, it’s like: Oh, Aaron Burr is a trust fund kid who’s too political and doesn’t stand for anything. And Hamilton is sort of this scrappy immigrant who’s brainy and fiery and righteous but maybe should be more cautious. Over time you get the hang of it. Or maybe it’s really easy to keep up if you’re used to seeing a lot of musical theater.

♠ I have no doubt that I would enjoy Hamilton much more the second, third, and fourth times I saw it. Realistically, I probably only understood half of what was happening, but it was enough.

♠ Act I introduces Hamilton, a Caribbean immigrant who eventually marries Eliza Schuyler (Erin Clemons), the daughter of one of the richest men in New York. We also see how Hamilton serves as a sort of right-hand man to George Washington (played by understudy Desmond Sean Ellington) during the war.  The second act is more political — it’s about Hamilton, Washington, Burr, James Madison, John Adams, Thomas Jefferson, and others throwing elbows as they try to build an American government.

♠ The stage design is vaguely nautical: lots of wood and ropes and pulleys. There’s also some kind of invisible conveyor beneath the stage that spins like a turntable, allowing the actors to stand still while being spun slowly away from or toward the center of the scene. 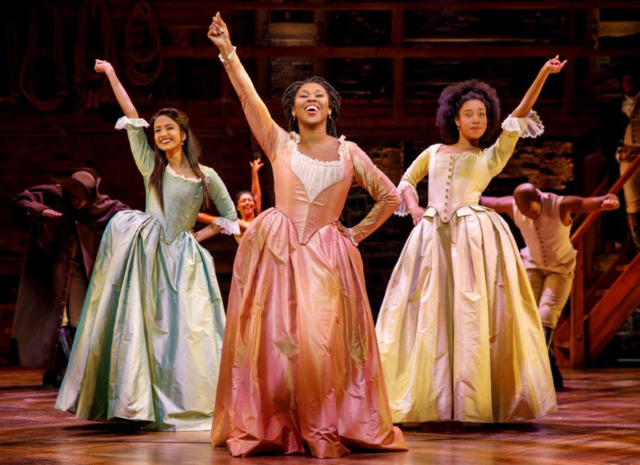 ♠ There’s a love triangle with Eliza Schuyler, her sister, and Hamilton. I didn’t really get it. Hamilton marries one, but is in love with the other? There’s a whole song about it, maybe even two songs about it. There’s three sisters in all, or at least three women who sing together, two of whom are sisters. I don’t know what the third sister’s deal was.

♠ The songs featuring the sisters were my favorites, though. These had more of a ’90s R&B vibe. Maybe a little Beyoncé. Lots of harmonies. Very lovely. The song “The Schuyler Sisters” is fantastic.

♠ I was trying to remember what “The Room Where It Happens” reminded me of, and I am ashamed to say it is a Phish song called “Julius.”

♠ The actor I thought was the star of the show was actually an understudy. His name is Nick Sanchez, and he played both Marquis de Lafayette and Thomas Jefferson. His swaggering presence was very Prince-like — maybe a little Deion Sanders in there, too. He rapped very fast, like Twista fast. Pure delight every moment he was onstage. 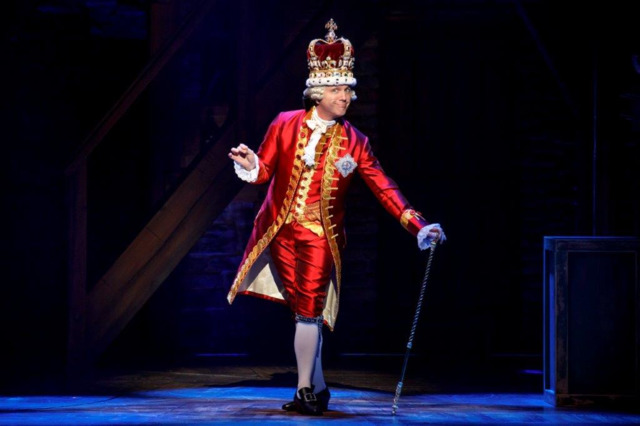 ♠ Lin-Manuel Miranda apparently wrote all these songs, which is insane. The songs are so good!

♠ Hamilton has incredible momentum. There was one long, romantic drama scene where I was like, Ugh, enough already. And right when I was starting to think that, the scene ended and Jefferson popped back onstage and said, “Can we get back to politics? Please?” And I was like, God, this play is amazing.

♠ I don’t know that I would pay $500 to see Hamilton. But if I had spent $100, I would have been totally happy with that decision.

♠ Hamilton runs through July 7 at the Music Hall. Performances are Tuesdays through Sundays, with matinees on Saturdays and Sundays.