For once in his life, Rob Zombie’s Halloween films will get to skirt the conversation of “most divisive Halloween entries ever.” That honor now belongs to David Gordon Green’s Halloween Ends—a lackluster and confounding closing of a trilogy that not only ends with a whimper but began to question what the point of this endeavor was in the first place.

Jumping forward in time four years after the events of Halloween Kills, the city of Haddonfield hasn’t exactly become a happier place. Michael Myers may have vanished, but the townspeople remain shaken. Blaming any and every tragedy that occurs, on the specter that hides behind a white mask—something that seems forgotten by the film’s end.

The new “boogeyman” they elect is 20-something Corey (Rohan Campbell, shouldering the combined energy of Caleb Landry Jones and Burn Gorman), a babysitter charged with an accidental murder. Hounded everywhere he goes, the only solace he’s able to find is in the company of survivors Laurie Strode (Jamie Lee Curtis, enjoying the finish line in sight) and granddaughter Allyson (Andi Matichak).

Unfortunately for everyone involved, the closer they all get, the more the shadow of Michael looms over everything. In rather unexpected ways actually, spelling doom once more for Haddonfield.

It’s more than a tad hard to point out some of the issues that befall Halloween Ends, as they’re all tied to spoiler territory. Save to say that there’s a bunch of story beats that aren’t just confusing, but go out of the way to rob the threads from previous entries of any agency.

The story of the Strode women, forever embroiled in the lasting effects of trauma, is side-lined for a new protagonist. One whose backstory is so hamfistedly shoved into the audience’s face that it feels like it belongs in a separate film. Not just because of the tone it conveys, which is eerily similar to Zombie’s realm).

Corey’s story and experiences are worth investigating, it just shouldn’t be at the expense of others. Both figuratively and literally. To the point where the movie continually facepalms itself as if to say “Oh yeah, this is a HALLOWEEN film!” 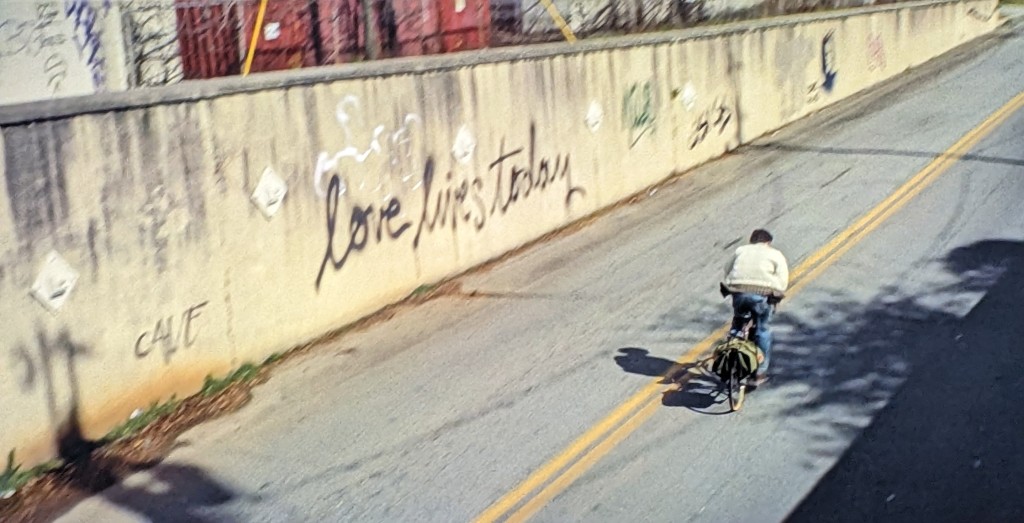 Still, the gorehounds who stick the rest out to check out the grue on display will be moderately pleased. What it lacks in scares, the movie makes up for with a decent amount of creative kills—dispatching cannon fodder with great aplomb, style, and red stuff, all without ever succumbing to much CGI wonkiness.

As a slasher, this will fulfill your bloodlust and then some, even if it never tops the all-out Halloween night assault of the second film in this recent run.

For all the time it spends lurking in the darkness, Green does try to cast some rays of light a d hope through it all. A bridge wall bears graffiti reading “Love Lives Today,” attempting to erase the mob’s rallying cry from the last entry. Laurie gets a chance to crack bad jokes, burn a pie, and smile. After a character is abused by their overprotective mother, the step-dad solemnly states “I hope you find love.” This step-dad, it should be mentioned, is the closes thing that Halloween Ends has to a decent person. This naturally means he gets unceremoniously killed off in a tense moment, as Green and co-writers Danny McBride, Chris Bernier and Paul Brad Logan seem to dislike humanity.

Halloween Ends is filled with seemingly confounding moves such as the above. Just as it looks to be settling into a groove, it jumps course—zigging and zagging all over the place, attempting to subvert conventions and expectations, rather than focus on the overall narrative leading to the odd inclusion of marching band bullies, a conspiracy theorist radio DJ (who spins Sebadoh in 2022), and needy ex-boyfriends.

Even if you were to take this all at face value with its decision to make such a radical departure, it doubles back on itself. A large portion of Halloween Ends comes off as a Lifetime variation on Wild At Heart meets Natural Born Killers—which again isn’t a bad thing on its own. When that’s jettisoned in the final 15 or so minutes of a two-hour film, that purports to be the finale of a trilogy, it can pose some problems.

As for where this latest era of Halloween ranks in the overall legacy? That’s tough to say.

The most endearing thing about the Michael Myers saga is that there’s no right or wrong answer. With several conflicting timelines, tangents, and versions possibly taking place in alternate dimensions, everyone can find something to love or enjoy—and plenty not to. The movie that wants to be for everyone is mostly for no one.