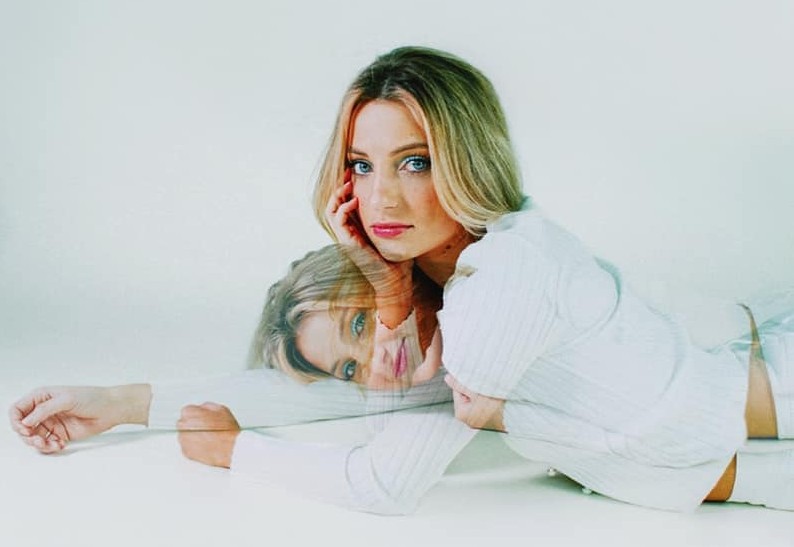 Country singer Halle Kearns might have moved to Nashville from Kansas City almost two years ago, but her Missouri roots find their way into her music, with her latest single, “Shoes to Fill,” an ode to the single father Kearns and her three sisters. It’s a beautifully charming song, although it might come as a bit of a change for those who’ve come to know the singer on the heels of this summer’s “Pick Me Up” and “I Drink Whiskey.” Those uptempo numbers are a little different, but the three songs have more in common with one another than you might think. I spoke with Kearns by phone earlier this month about the new single and her plans for the future.

The Pitch: You moved to Nashville last yearly, last year if I’m not mistaken? Was that a straight move from Columbia or was it a hopscotch sort of thing?

Halle Kearns: Yes, in March of 2019. It was kind of a hopscotch. I was in Columbia for the first 18 years of my life and after high school, I moved to Kansas City. I was there for about four years before moving to Nashville.

I’ve talked to quite a few people over the years who have moved to to Nashville to help their careers and it seems like it’s done pretty well for you thus far.

Yeah, it was definitely the right choice for me. Everyone kept saying, “You have to be there. You got to get down to Nashville,” and I was kind of rolling my eyes at them at first because I felt like I was doing everything I needed to do from Kansas City. It comes down to the business side of things, you know? All the labels and all the publishers and everything are all down in Nashville, so you kind of got to be there for that aspect, but as far as live performing goes, Kansas City was an awesome scene for that.

I read that you had actually recorded another EP before these tracks and it didn’t turn out the way you wanted it to. What were the issues with those initial recordings?

Everyone has what we call like a Nashville horror story and that would be mine. I got in touch with this producer online and I was really new to the whole scene and I had no experience in this industry whatsoever yet and just really didn’t know right from wrong yet or anything. He made a lot of big promises and talked a big game and everything and–not to get into too many shady details or anything–but I recorded with him, paid him, and didn’t hear back from him for six months. It was bad.

In that six months I had actually made the move. I’d been visiting Nashville once a month for about a year prior to moving and then, once I made that move, I just learned so much so exponentially about the way things happen and the way things unfold in this industry. I finally realized what was going on and there was a lot of growth that happened within my writing and stylistically, in my artistry, that sort of thing–so once I got the mixes back, finally, it was definitely just not where I was anymore.

That’s a really unfortunate thing but it also seems like it’s like a blessing in disguise, because it means that the first material that you’ve put out is not something that’s reflective of where you were a year and a half or two years ago.

Yes. Absolutely. And, you know, it did teach me so much. It’s such a blessing in disguise because I learned a lot: that there are people who are going to take advantage of you in this industry, and you got to be smart, and really trust your gut with that sort of thing, and the golden rule of “If something sounds too good to be true, it probably is.” That’s a real thing and smart to go by.

It did give me an opportunity for growth. I felt really really lost after that happened and just really stuck because I was like, “Well, I recorded music. I really don’t like it. I don’t have songs yet that I am proud of,” and it took me working for a year to get to a point where I can put these songs out and I don’t care if people like them or not, because I do.

Obviously, the hope is that other people like them, as well, but I needed to get to a point–for me–where I was so proud of my work that it didn’t matter how it was received.

“Pick Me Up” was received really well. It’s gotten a lot of streams and the video got played on CMT. That’s a pretty nice reception to your first-ever single, and it’s a good, lighthearted, fun, upbeat song.

The first time I was on CMT was in September. Just last month.

Your first two singles, “Pick Me Up” and “I Drink Whiskey,” have this very fun, almost party atmosphere. Was it your intent to have your first couple of songs be this upbeat? You can dance to them, and you’re putting them out towards the end of summer. Even though nobody can go anywhere, it’s still nice to be able to hang out in your backyard and have some drinking music.

That is exactly the thought process behind it. I wanted “Pick Me Up” out first, just because of the title alone. I think everyone needs a pick-me-up right now, and it does exactly that. I wanted it to be a three-minute escape for people whenever the weight of the world got to feel really heavy.

“I Drink Whiskey” was actually going to come out third and my third release, “Shoes to Fill,” out second. I ended up flip-flopping them because “Pick Me Up” was received so well. As you said, it’s very light-hearted and fun and people seem to really like that. I wanted to keep that going throughout the warmer months. We kept calling it “patio season,” so we got to keep people on their patios, jamming out, so we released “I Drink Whiskey” next and this third single is definitely taking a turn. It’s still a happy, really warm, sentimental song, but it’s about my dad.

That song is like my heart and soul on a song. I am super, super close with my father and this song is completely just honoring the way he has raised me and my three sisters. This is definitely the heavier and more tugging-on-the-heartstrings song. I just wanted to work my way into that, because I know who I am as an artist and I’ve created all this music but, to the general public, no one’s heard it yet.

So, I wanted to be smart about the way I introduced myself and gave people something with that light-hearted feel first and then worked into the more intimate sides of my story.

“Shoes to Fill” fits really well thematically with the other two songs in that, in addition to being like an ode to your dad, it’s also kind of a kiss-off song, in the vein of “I Drink Whiskey,” where you talk about a two-year relationship where this person didn’t treat you well. “Shoes to Fill” is the song where you’re like, “I have standards, and here’s who you have to live up to.”

I haven’t heard it described that way–a kiss-off song–but I guess it kind of is.

It’s a very sweet kiss-off song, though. It’s like, “You’re not as good as this man.” It’s very much in the vein of “Butterfly Kisses” by Bob Carlisle but from the daughter’s view. What’s your dad’s name and what was it like growing up, being raised by him?

My dad’s name is Kevin Kearns and it’s hard to sum it up, honestly. He’s definitely different than anyone I’ve ever seen. He raised me by himself from when I was about 11 on and so, I have a respect that is ever-growing as I get older and come into adulthood. He’s always been just the most reliable rock of a human. He seriously has been my best friend throughout all these years.

People say, “You can be a parent or you can be a friend: you can’t be both,” but I completely disagree with that. He has been a great parental figure, but he’s also been my best friend throughout everything and he knows when it’s time to be which role – when it’s time to let go of, “I’m the dad,” and just be my friend and when it’s time to step up and be like, “Okay, no. I’m your father. You’re not gonna do that.” He’s just amazing and this song was really special because I wrote it and it’s from my perspective and that sort of thing, but I have three sisters as well who all feel the exact same way about my dad and it was really cool to create this anthem for my family this is coming from all of us, in a sense.

I totally see this as being the father-daughter dance at a lot of weddings.

That is exactly what I wanted! I actually really want to release an acoustic father-daughter version. The song’s pretty stripped down, anyway, but I was thinking a piano mix would be beautiful for a father-daughter dance.

This is the third of five songs that you have recorded that’ll be an EP. When that going to be released?

That EP is going to come out in late November. There are two more songs on it. One’s called “Before He Could,” and that is my sad girl anthem. It is really heart-wrenching and I’ve played both sides of the song, which is super interesting–just both perspectives–so, it’s probably my favorite, production-wise, on the album. Then, another song, called “Whatever You Do,” which is a really beachy song and it’s actually written on a beach, from a beach perspective, so it’s really just fun and lighthearted – kind of like those first two.

Because it’s Covid and you can’t tour, how are you coping with not being able to perform? I know you got your start performing a lot.

That’s really been difficult, especially because I took the last year in Nashville off from performing except for a couple of pop-up shows. I was really ready for 2020, to jump back into the ring and get back on stage but, of course, everyone’s kind of in the same boat with that. Live performances online have been super, super great helping me get through that. Performing is one of my absolute favorite elements of this career choice I’m taking, so it’s really been tough, not being able to do that.

However, it’s gotten me into the studio sooner than I thought I was going to and I’ve been writing a lot more and it’s just pushed me into different forms of creativity, so definitely a silver lining among all of this, but I’m really, really ready to get back on stage again.

Halle Kearns’ “Shoes to Fill” is out now via most digital streaming services.