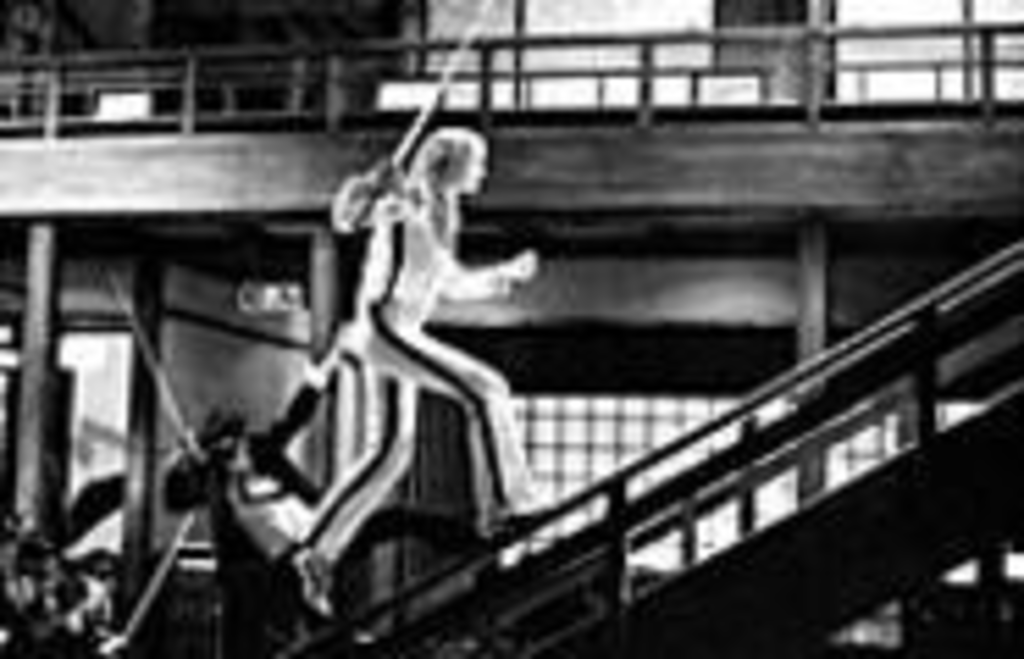 The opening credits insist that Kill Bill: Volume 1 is “Quentin Tarantino’s 4th film,” but it’s actually No. 3.5. Until its proper ending arrives next February, it can’t be measured as a whole. Just when the movie gets going, it ends with an inglorious thunk.

We’re left to wonder if it was worth the six-year wait since Tarantino’s last movie, Jackie Brown, because this story of revenge doesn’t achieve its goal —Uma Thurman’s Bride killing David Carradine’s Bill. (That doesn’t give anything away if you’ve peeked at the movie poster.) You’re never invited into the film, only told to admire it from a distance. Marvel at the knife fight in a suburban home or the sword battle that pits Thurman against a hundred men in Green Hornet masks. Delight in the copious references to movies Tarantino’s seen (and made), most notably 1960s and ’70s Hong Kong cinema and François Truffaut’s 1968 revenge picture The Bride Wore Black. Giggle at the blood that sprays from decapitated corpses like some Monty Python tribute. That’s where Tarantino thrives: in the spectacle of moviemaking. But his passion doesn’t extend to the pleasure of filmgoing. We want some kind of closure, not a “coming soon” demanded by a studio that wants to make back its investment by twice reaching into our wallets.

In the end, what we get is a tale of revenge half-satisfied, and in typical Tarantino fashion, it’s told out of sequence in a narrative that speeds forward, then jerks backward. Before the campy drive-in-grindhouse-style title credits (which inform us that the movie has been shot in “ShawVision,” an homage to Hong Kong’s pioneering Shaw Brothers studio), we see Thurman’s Bride being lectured to and executed by Carradine’s Bill, heard but never seen in Volume 1. Bill and his band of hired guns, the Deadly Viper Assassination Squad, have crashed the Bride’s wedding and massacred the lot. The Bride is shot in the head and presumed dead.

Four years later, the church has been replaced by the placid Pasadena home of Vernita Green (Vivica A. Fox), like the Bride a former Viper. The Bride has come to kill Vernita, but the fight is cut short by the appearance of Vernita’s small daughter. When she comes in the front door, the women hide their blades — a little joke drowned in the blood spilled in front of the girl. It’s the only moment in the movie that means anything, and it’s devastating. In a movie filled with so much carnage, so many dozens of body parts separated from their owners, it’s a single knife to a chest that does the most damage.

The Bride escapes to Okinawa, where she seeks legendary maker of indestructible swords Hattori Hanzo, played by Shaw Brothers immortal Sonny Chiba. Then it’s off to find O-Ren Ishi (Lucy Liu), a brutal Viper who will end a meeting by collecting the head of anyone who doubts her authority.

The showdown with O-Ren and her minions is as stylized as any Helmut Newton photo shoot. And though it’s a blast to watch, it becomes tiresome — 25 minutes of Thurman hacking her way through the crowd to get to a woman whose fate we know early on. It’s the most climactic anti-climax in recent film history, a no-duh coda awaiting the ending it deserves but doesn’t get — not this year, anyway.