Gullywasher’s Chris Hudson on the creation of Holding the Dawning 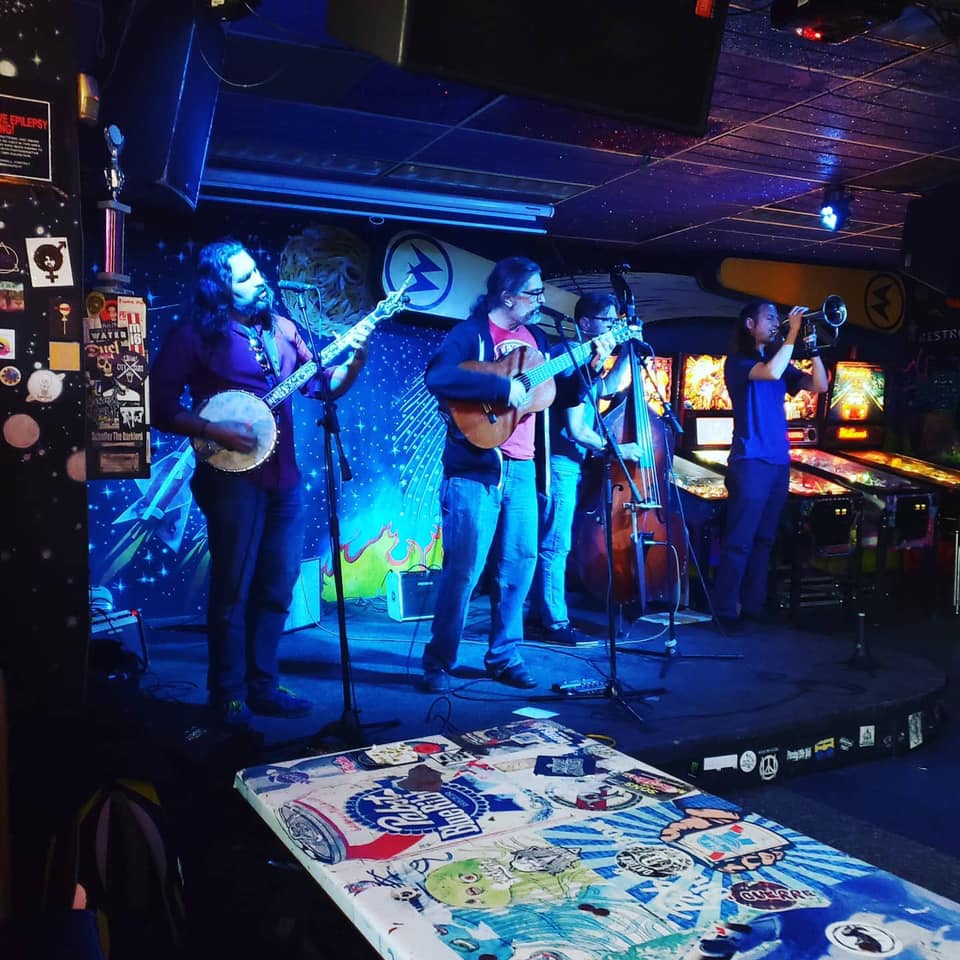 Holding the Dawning, the new album from Kansas City roots trio Gullywasher, is awash in the sounds of Americana, with hints of bluegrass, folk, and country. Thanks to the fact that the core trio of Matt Cathlina (upright bass/vocals), Chris Hudson (guitar/vocals), and Sam Wright (banjo/vocals) brought in an array of friends to join them on this release, the album can at times feel like the Winfield version of an early Sufjan Stevens album, replete with soaring trumpet, which is a very good thing. Gullywasher’s latest is by turns intimate and expansive, and just the thing for spring nights as the weather begins to warm.

I spoke with Gullywasher’s frontman and main songwriter, Chris Hudson, by phone about how Holding the Dawning came together.

The Pitch: What’s been the delay since the first album, almost three years ago?

Chris Hudson: Really, the delay was that we didn’t know what we were. That first album was really kind of a demo album and we were just getting out and doing performing. We performed that first album for a couple years at all the local clubs here in town. We changed some personnel up just a little bit and we started actually recording the newest one in 2019 at a friend of a friend of ours’ studio, then Covid 19 hit later on last year, so we had to pretty much put everything on hold.

The entire time during Covid 19, we all got together and we just kept rehearsing. We had our own little Covid pack. We kept tracing each other, making sure that we knew where we were going and then we just rehearsed and finally got some outdoor gigs kind of towards mid-summer. I just decided that we should go into a studio and start recording the songs, so we ended up at Weights and Measures with Duane Trower. I’ve known him for a long time.

We started actually we started recording Holding the Dawning about September. We did it all the way up until about November and just kept kept putting it together. We brought in several other folks who are friends of ours: Mark Hamblin on trumpet, Chad Brothers on guitar and vocals on a couple tracks and Devon Turan–he’s with the Timbers–playing pedal steel so we were able to do a little bit more of a of a detailed album.

The first album was pretty much recorded in in my home studio. It came off pretty well but at the same time, it just wasn’t anything that I really want to put into a massive market. I would like to re-record those songs. We had a fiddle player and then we got rid of the fiddle player and our music is definitely not completely a bluegrass sound so we wanted to completely change. We wanted to show more of how diverse we are or how dynamic we are, too.

Sometimes, when you have a certain member in your band, there’s just something about that instrument that kind of–it doesn’t hold you back, but it doesn’t seem like it lets you get further with things unless they’re completely a dynamic player, themselves. That’s usually the case, but–enough of that. I don’t know if I’m answering the question too much but I’m trying to give you a very roundabout answer.

Some of these songs, folks got a sneak preview of them with your Isolation Tracks: Side Two release that came out in July of last year, albeit in different forms.

Those were just all little demos. Basically, it was a way just to keep myself together. There’s so many folks that just kind of went off the deep end because they lost everything and I really just wanted to remain productive, so I released all those little Isolation Tracks demos. They’re pretty out there and I just wanted to get those out. At the least, I just thought it was fun doing them. I had a few people that I was doing collaborations back and forth with, too, on that one.

One of the high points within the whole pandemic experience, not being able to get out and do shows and stuff, was just really honing down the whole home studio experience and being able to rehearse with Gullywasher. We made the decision to go into the studio and it just fit really nicely. Duane’s studio’s massive and huge and he’s such a nice guy–so easy to work–once we got our trumpet player to come and play with us and then Chad and Devon to come, it really really helped out the whole experience.

I was gonna say that those tracks with Mark on trumpet–especially “Incoherent Redline Slapback”–they just have this scope. They just sound so big. I like the way that Holding the Dawning has this ebb and flow between these more intimate songs and these bigger ones. It’s the difference between sitting around a fireplace versus sitting around a fire out on the prairie.

Sam Wright–the guy who plays banjo and sings with me–he’s massive in the way he puts out his vocal parts and where he puts his voice. Matt [Cathlina], as well–the bass player. I’ve been playing with Sam almost for 20 years. We work at Kansas City Young Audiences together and he’s an actor, so that’s his main thing. I got him at the banjo playing a long time ago. We do an in-school program for fourth graders in Kansas and we teach Kansas cultural history with two other actors. I played guitar with it but then he wanted to play banjo in the play and I was just like, “Okay, well let’s do some banjo.” I learned how to play banjo to teach him how to play banjo.

The album is this mix of songs with just the straight Gullywasher trio and then you have these guests on tracks. Did you bring in Chad and Devon and Mark with ideas of what you wanted them to do on these tracks or were you just like, “We’re going to play you this song and you put your magic on it”?

That’s kind of what happened, really. Mark always plays with us but Mark is kind of like our fourth member, really. The only thing he couldn’t do was really rehearse with us last year because he’s afraid he was going to blow air on us the entire time–which is a good thing! He already knew the songs really well. Chad, I’ve worked with Chad the last three years on several other projects and we hit it off really well, so he knows a lot of the songs we performed him on stage. Devon has played several long gigs with us. He knew the music, as well, but Devon was probably the one who just kind of came in and really didn’t know what was happening and I liked it.

I shouldn’t say he didn’t know what was happening–he basically just listened to things for a little while, I gave him the chord changes and a couple suggestions, and he just kind of went with it. He’s really a fun musician to play with, man. I dig him. We just recorded it pretty much live, with maybe a few overdubs, Kudos to Duane, who got the multi-track happening, too, so it really all came together. Everybody that contributed and everybody and their ideas: it worked out great.

Gullywasher’s album release show for Holding the Dawning is Friday, April 30, at the Kaw Valley Public House with Jenna & Martin and Folk in the Flow. Details on that show here. The door charge is waived with the purchase of the new CD.