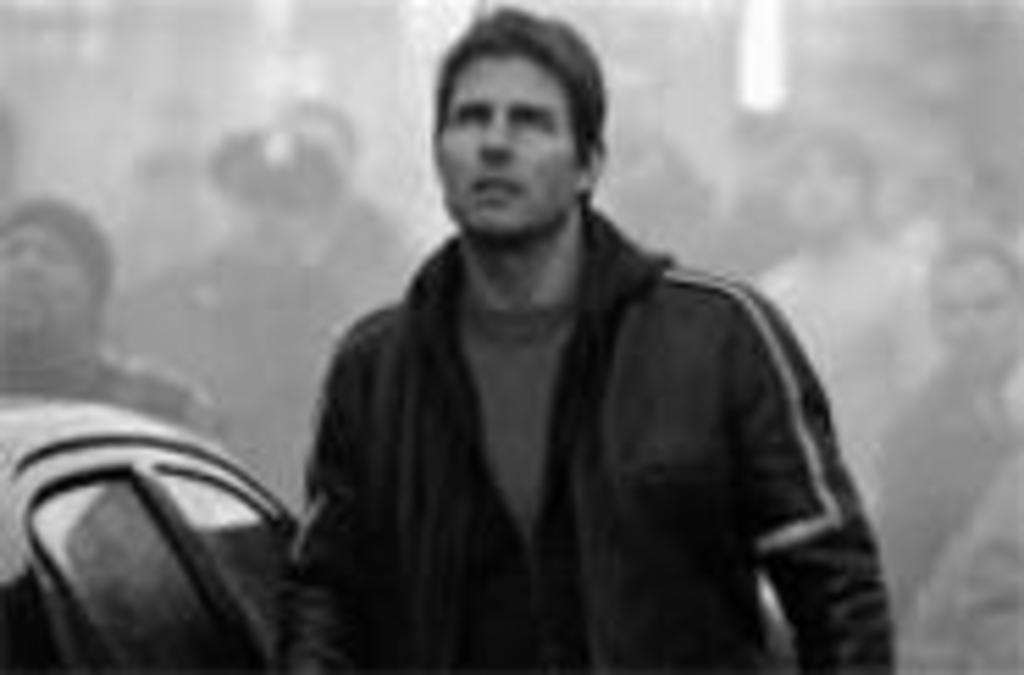 Steven Spielberg’s adaptation of H.G. Wells’ War of the Worlds is Close Encounters of the Third Kind turned inside-out. The aliens are still out there, but this time they’re out for our blood. The young filmmaker who wrote and directed Close Encounters, which awed and dazzled like an exquisitely illustrated bedtime tale, has grown nastier in his middle age, making what’s essentially a $120 million B-movie and slathering it in gore. That’s not a bad thing. Spielberg’s War of the Worlds, adapted by screenwriters Josh Friedman and David Koepp, is a riveting thrill ride.

Spielberg wastes no time cutting to the gutting. After an ominous bit of narration by Morgan Freeman, who warns of creatures from a faraway planet observing Earth with “envious eyes,” we’re introduced to the film’s heroic trinity — dock worker Ray Ferrier (Tom Cruise) and his two kids, Robbie (Justin Chatwin) and Rachel (Dakota Fanning) — just in time for what appears to be an electrical storm wreaking havoc in their New Jersey neighborhood. We learn just enough about their strained relationship to know that they can barely survive each other in peacetime, much less when under attack by alien invaders. Ray broods and pouts, calls Robbie “a dick” when he finds out the boy is a Red Sox fan, and tells Rachel to order takeout when he turns in while the sun’s still up. They’re clearly in need of a little therapy — and being chased by aliens offers some pretty good bonding opportunities.

The storm awakens giant, three-legged machines that have been hibernating beneath our feet for, perhaps, thousands of years. They emerge from concrete cocoons, stretch their legs and begin zapping everyone in sight with a death ray that reduces humans to ash, leaving only their clothes behind. For the next 100 minutes, the movie becomes a chase as Ray and his family try to stay ahead of the aliens.

Rarely has the inevitable and obvious also been so terrifying. Spielberg’s landscape is by turns barren (for a while, you’re led to believe that Ray and his children are lone survivors) and crowded with desperate hordes who will turn to murder to save their own skins. There are shocking, terrifying images — a flaming train hurtling down the tracks, soldiers waging a pointless war against invincible and ravenous enemies, a ferry doing its Titanic impression as aliens emerge from the sea below. There’s even a scene filmed entirely in the dark, perhaps the most chilling effect in a movie full of computer-generated images.

War of the Worlds, which is strikingly faithful to Byron Haskin’s 1953 big-screen version, plays sort of like Spielberg’s homage to Spielberg. It’s a hodgepodge of bits and pieces borrowed from Jaws, Jurassic Park, Raiders of the Lost Ark (another Z-grade story elevated to grade-A status) — even Schindler’s List, with its scenes of bedraggled survivors marching to the beat of soldiers’ orders. The director gets off not only on gross-out theatrics (in one what-the-hell moment, Cruise is sucked into what appears to be an alien ship’s asshole, armed with a fistful of hand grenades) but also on the deeper meaning of shallow thrills. This is scary sci-fi set in a real world that’s even more terrifying.

The worst you can say of War of the Worlds is that its ending fizzles after so much sizzle, but this time it’s not entirely the fault of the director, whose brilliant and underrated A.I. Artificial Intelligence and Minority Report likewise petered out with unsatisfactory resolutions. The filmmakers are, for the most part, remaining faithful to Wells’ novel, which suggests that humans not only own this planet but deserve it. War of the Worlds earns its finish, like the marathon runner who reaches the end of the race and collapses in a heap of exhaustion and relief. Spielberg may be rid of his giddy optimism and youthful hope, but he’s still a masterful entertainer, even when all he wants to do is scare the hell out of you.