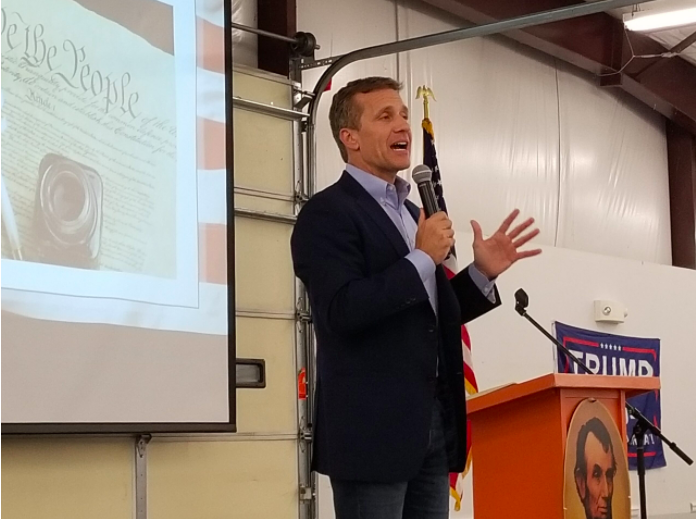 Former Missouri Gov. Eric Greitens showed he still has an enthusiastic following among rural voters Friday night, with his entrance at the Macon County Lincoln Days highlighted by an extended standing ovation.

Greitens, who is seeking the Republican nomination for U.S. Senate in 2022, waited to make his entrance until the evening’s most popular event—the homemade pie auctioned at prices up to $400—was complete. But as he made his way through the crowd of more than 250 people, he demonstrated that despite two years of political exile after resigning in disgrace, he maintains a base of support in deeply conservative swaths of Missouri.

During his 25-minute stump speech, Greitens proclaimed he had the support of many major allies of former President Donald Trump, including Rudy Giuliani, and dropped Trump’s name 11 times in the first five minutes of his talk.

“I’ll tell you this, the mainstream media doesn’t like it. And the leftists hate it, but the fact is Macon County and Northeast Missouri is Trump country,” Greitens said.

He made no reference to the reasons he served only 17 months as governor. The only allusion to the indictments and impeachment investigation that led to his resignation at the end of May 2018 was in his introduction by Robin Simpson, who has backed Greitens since he launched his campaign for governor in 2015 and served as president of his controversial dark-money nonprofit, A New Missouri Inc.

“As you know, he’s gone through a lot,” Simpson said. “And we all had to watch it. And it was heartbreaking. But let me tell you this. He’s back. Yes, he’s back. And he’s stronger. He is stronger, and he’s wiser. And he is ready to fight.”

This year, the circuit is especially important because U.S. Sen. Roy Blunt will retire after two terms in the upper chamber, ending a political career that began in 1973 when he was appointed Greene County Clerk.

Greitens has only one announced major opponent for the nomination, Attorney General Eric Schmitt. And Jackson County Republicans will get a chance to see them both on Saturday night. There are several other candidates waiting in the wings, however, with one of the most likely, U.S. Rep. Jason Smith of Salem, planning a fundraiser later this month at Trump’s Mar-a-Lago resort.

Only someone who identifies with Trump – and his grievances over the 2020 election result – will get the backing of Macon County Republicans, said county chairman Dean Vansickle and county Republican club president John Kerns.

“The fact that we had the election stolen” will make GOP voters enthusiastic for 2022, Vansickle said.

“Macon County is about God, guns and freedom,” Kerns added. “We got things taken away from us.”

The sense that Greitens is among those who had something taken from him will help him with many Macon County voters.

“I’m sold on Gov. Greitens,” said Teresa Gates, who was chatting with friend Linda Mohn before the prime rib dinner was served. “I’m a Trump voter.”

“We want someone who stands for the truth,” Mohn said.

Since his resignation, which was part of a plea deal involving the second felony charge, Greitens and his wife have divorced.

He was reinstated as an officer in the Naval Reserve, assigned to the Maritime Expeditionary Security Squadron 10, stationed at Bridgeton, on Jan. 14, 2020, according to a service biography provided by the Navy Department.

It is not an active duty posting.

Much of his stump speech used themes familiar from his campaign for governor. There were allusions to his time in combat in Iraq and Afghanistan and an outline of what he did with The Mission Continues.

He also identified his perceived enemies and then attacked them.

.@EricGreitens does not belong in the US Senate

He took the pose of an aggressive fighter and sought to depict Democrats — especially President Joe Biden — as weak.

His internal polling, Greitens said, shows him with a wide lead over any potential opponents.

“He said, ‘Eric, your people have bar-fight intensity. They are ready to go,’” Greitens told the crowd.

Greitens mocked Biden’s recent executive orders on guns and calls for Congressional action to expand background checks and ban assault-style rifles. The actions are an attempt to undermine the Second Amendment, Greitens said, and take away people’s guns.

After his speech, Greitens refused to take any questions from a reporter, but said he is open to a scheduled interview. He spent many minutes signing books for admirers and posing for photos.

Other Republicans will have a hard time beating him in Macon County, Vansickle said.

“Gov. Greitens is representing the people,” Vansickle said, “and what that means is we have a voice in Washington, D.C.”