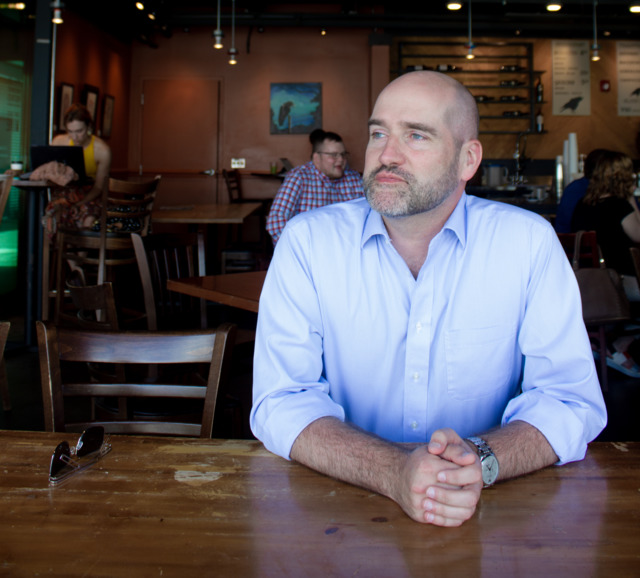 Razer was raised in Cooter, MO, population 450. “Not a great place for a closeted gay kid to grow up,” he says.
Kelcie McKenney

The Missouri legislature recently wrapped up a session that was awful for — among others — women, LGBTQ Missourians, and Democrats. Greg Razer is two of those three. On a recent Saturday morning, he’s holding a town hall to tell his constituents all about it.

About 70 people of various ages have interrupted their weekend activities to hear from their state representative in an anteroom at a Brookside church. One woman carries a yoga mat. Another brings two dogs in a basket. A kid in a Scout’s uniform scribbles copious notes.

Later this evening, Razer will appear on stage at Kansas City PrideFest wearing jeans and a T-shirt with a queen’s insignia. But this morning, he’s sporting a suit with an open-collared oxford shirt. People greet him as they would a well-liked neighbor.

“This was my third year in the legislature, and most of the time I thank you for sending me there,” Razer says.

He runs through a summary of the good, the bad, and the ugly in the 2019 Missouri legislative session. The list of upsides is so short that Razer draws approving applause when he mentions that members of the Westboro Baptist Church showed up one day at the Capitol to hassle him for his unsuccessful attempts to get protections for LGBTQ Missourians written into the state’s human rights statutes.

Though Razer represents a progressive, urban district in Kansas City (roughly: the Country Club Plaza to Interstate 435, State Line to Troost Avenue), the Westboro experience was hardly his first exposure to discrimination. As a gay Democrat who grew up on the fringes of a Bootheel town called Cooter (!), Razer understands rural Missouri much better than it understands him. His family was cotton farmers, and he attended an evangelical church in a town with a population of 450.

“Not a great place for a closeted gay kid to grow up,” Razer says. “At 17 years old, my senior year in high school, I was suicidal.”

College saved him, he says. Specifically the University of Missouri, where he majored in history at the Columbia campus. “I got to Mizzou, and it’s just like my whole world opened up. I met all these people from different parts of the state and country and the world, with all these different thoughts and ideas. It changed my life.”

By his junior year, Razer was done with concealing his sexual identity. Coming out was so difficult, he says, that he remembers the exact dates he did so. The second person he told was his roommate. Razer’s declaration was followed by a long silence. “If you’re gay,” the bemused roommate finally said, “why isn’t our apartment decorated better?”

Somewhat ironically, around the time Razer was coming out, he was also going into hiding — as Truman the Tiger.

“I kept talking about it and my friends were like, damn it, Greg, try out or shut up,” he says of his desire to be the school’s mascot. “So I tried out. And I got it.” Razer ended up representing the school as Truman for two years, another reason his affiliation with Mizzou remains a central part of Razer’s identity to this day.

Razer moved to Kansas City after college and got his start in politics as an aide to Jackson County legislator Scott Burnett. Before getting elected to represent Missouri’s 25th legislative district in 2016, he spent eight years working as a staffer for former U.S. Sen. Claire McCaskill. Razer took office at the same time as Eric Greitens. His first two legislative sessions were dominated by dramas surrounding the scandal-ridden GOP governor.

But at the start of this year he felt cautiously optimistic. Greitens was gone, replaced by the affable Mike Parson. Razer had hopes for a new, more progressive House leadership.

Those hopes didn’t survive the first week. As the House was conducting opening business, Razer proposed barring lawmakers from discriminating on the basis of sexual orientation or gender identity when hiring staff.  Republicans objected, citing religious freedom. “That kind of set the tone of the session for me,” Razer says.

Although four openly LGBTQ lawmakers serve in the legislature, Razer has become the banner carrier for issues affecting those communities.

“And look, I’m happy to do it,” he says. “I know today, in every single House district in the state, there is some teenager thinking about ending their life because they don’t see a way that they can ever come out and be happy. I will fight for them as hard as I can.”

He said that very thing on the House floor, in the one chance he got this year to urge lawmakers to add sexual orientation and gender identity to the Missouri Non Discrimination Act. It was to no avail. For the 21st year, the Republican-led House protected a status quo that allows employers, landlords, and others to deny opportunity to persons on those grounds.

Razer for the most part remains collegial with Republican legislators. “I think I’m pretty well liked in the legislature,” he says. “But then they go back to their offices and write these anti-LGBT bills.”

Support sometimes comes from unexpected quarters. “There is this handful of older white rural Republican males who stand up for us,” Razer says “Kind of the exact opposite of what you would think. But they all have a son, a daughter, a nephew, a niece who has come out.”

Although he doesn’t mind being known for LGBTQ advocacy, Razer is passionate about a range of issues. Unfortunately, most of them seemed to go the wrong way in Missouri this year.

He was excited to be named to the influential House budget committee — until it became clear his GOP colleagues were intent on voting down every amendment offered by a Democrat.

He served on the transportation committee — but hated the legislature’s ultimate decision to fund bridge and road repairs out of the state’s general fund. 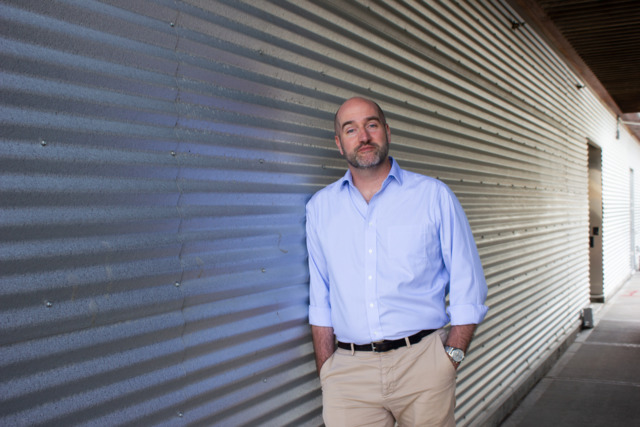 Razer’s affiliation with the University of Missouri remains a central part of his identify, and he’s particularly appalled by Missouri Republicans’ attacks on higher education.
Kelcie McKenney

And Razer was repeatedly appalled by the Republican majority’s attacks on higher education under the guise of promoting religious freedom and/or free speech.

A bill brazenly called the “Campus Free Speech Act” would have allowed students to sue colleges and individual professors who dared to express opinions outside of the designated topic in the classroom. “It’s really the no-critical-thinking bill,” Razer says.

Another proposal would have protected student groups that wanted to restrict membership based on “sincerely held religious beliefs.” Advocates tried to justify the discrimination with a far-fetched example: What if the Southern Baptists tried to infiltrate the campus Catholic club?

“Nobody’s concerned that the Southern Baptist group is going to have a coup against the Catholics,” Razer informed a committee. “This bill is designed to keep people like me out of a club.”

Neither of those bills passed. But Razer remains convinced the legislature is out to damage his beloved University of Missouri system.

That set off conservatives, who accused Agrawal of not protecting the speaker or his right to free speech.

“They did everything they could to protect the speaker,” Razer says. “[Conservatives] are mad because the chancellor said, ‘We respect LGBT people.’”

For the 2019 Missouri legislative session’s grande finale, Republicans legislated a ban on all abortions after the eighth week of pregnancy, the lone exception being to save the life of the mother.

Back at the Brookside town hall, Razer tells the audience that the debate on the House floor was “passionate and personal. There were lots of tears on both sides of the aisle. It was horrible.”

He continues: “I’m hoping an extremist bill like this abortion bill may the wake-up call. At some point the people of Missouri have to take the state back.”

He is preaching to the choir. One man raises his hand to announce he fled Kansas three years ago to escape former Gov. Sam Brownback and GOP craziness there. “Now I’m thinking Missouri is even worse,” he says.

At the moment, it’s difficult to argue otherwise. “You all did not pay me enough,” Razer jokes to his constituents.

The truth is, though, Razer thrives on politics and public service. He is currently mounting a campaign for a state Senate seat that will open up in 2020. That will take him into south Kansas City, Grandview, and the fringes of Lee’s Summit. The district is traditionally Democratic turf but a bit more conservative than the friendly environs of Razer’s House district.

Razer wraps up his town hall by inviting constituents to visit the PrideFest going on downtown. It’s coinciding with the 50th anniversary of the Stonewall Rebellion in New York City, a pivotal moment in the fight for gay rights.

“In 1969 I could be arrested,” Razer says. “Today, I can be married, serve in the military, and I get to stand in front of you as your state representative.”

Even — or perhaps especially — if that means serving in the Missouri legislature.