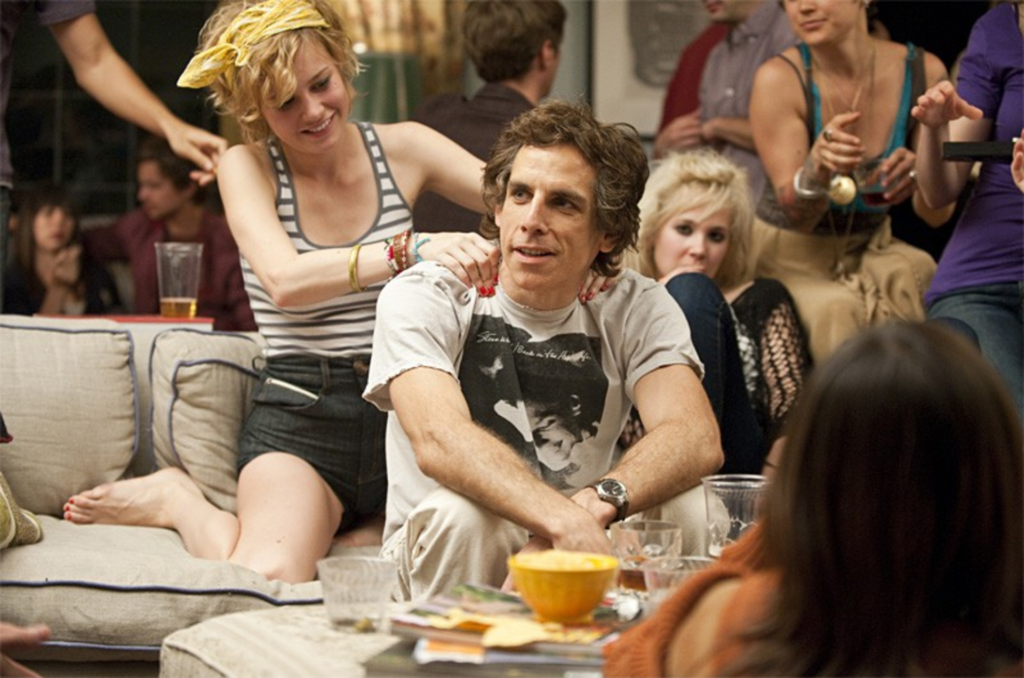 Sad, funny and acutely self-conscious, Noah Baumbach’s new movie is the sort of mordant character study that people imagine was common in the 1970s. Greenberg is unafraid to project a downbeat worldview or feature an impossible protagonist. Loser Roger Greenberg (Ben Stiller) is also painfully poignant.

Baumbach’s sixth feature is his first to be set in Los Angeles, and the director wastes no time commenting on the milieu. Introduced navigating Sunset Boulevard, Florence Marr (Greta Gerwig) is the personal assistant to a Hollywood Hills hotshot (Chris Messina) who’s packing for a vacation in Vietnam with his family. The ever-obliging Florence is supposed to do whatever she can for her boss’s high-strung brother, Roger. Newly released from a mental hospital, Roger will be house-sitting and looking after the family dog, Mahler. The blanket “whatever” will cover multitudes, not least of which is Greenberg’s refusal to drive a car.

Stiller makes no bid for audience sympathy, playing Greenberg with the haunted look of a man who’s about a single missed cue from total rage. A failed rock musician turned carpenter, he’s a cranky, opinionated, self-pitying know-it-all. (Upon first meeting Florence, he insists on playing the classic-rock chestnut “It Never Rains in Southern California” and instructing her as to its significance.) Greenberg explains that his current project is “doing nothing,” which includes writing unsent letters of complaint to airlines, Starbucks and Michael Bloomberg.

“I’m not one of those preening L.A. people who wants everything to be about them,” Greenberg maintains while imposing himself on his brutally depressed erstwhile bandmate, Ivan (Rhys Ifans), who takes Greenberg to see old friends who are gathered for an acutely discomfiting children’s party. Later at Florence’s, Greenberg makes an abrupt pass, which she docilely accepts — up to a point. Their relationship, or lack thereof, is the movie’s ongoing disaster. Gerwig here appears unformed and ungainly, as well as naturalistically ambivalent — she’s been successfully Baumbachized.

Not much happens in Greenberg: In the service of the shaggy-dog story, Mahler develops a medical condition. Greenberg drifts into an entropic club to hear Florence listlessly perform before an open mic. Ivan takes Greenberg out for his 41st birthday, and Greenberg decides to invite Florence; when she shows, he ducks out to phone his less-than-interested old girlfriend (Jennifer Jason Leigh, who co-produced), then throws a tantrum when a birthday cake arrives. Neither inappropriate behavior nor awkward sex dissuades Flo; Greenberg has to be unspeakably mean before she finally gets it.

Greenberg returns to his temporary digs to find the house taken over by his niece and her 20-year-old friends. Party time! Increasingly manic, Greenberg can’t stop babbling: “I read an article — aren’t you guys all just fucking on the Internet?” A yucky animal corpse in the pool and what sounds like Serge Gainsbourg in his brain, Greenberg leaves Florence a hilarious voice-mail message en route to another crackup.

Baumbach is a notably literate filmmaker, and Greenberg is no less witty than Baumbach’s previous features (Margot at the Wedding, The Squid and the Whale), but it’s more adroitly offhanded. Greenberg is a movie of throwaway one-liners and evocatively nondescript locations. The style is observational, the drama is understated, and, when the time comes, it knocks you out with the subtlest of badda-booms.