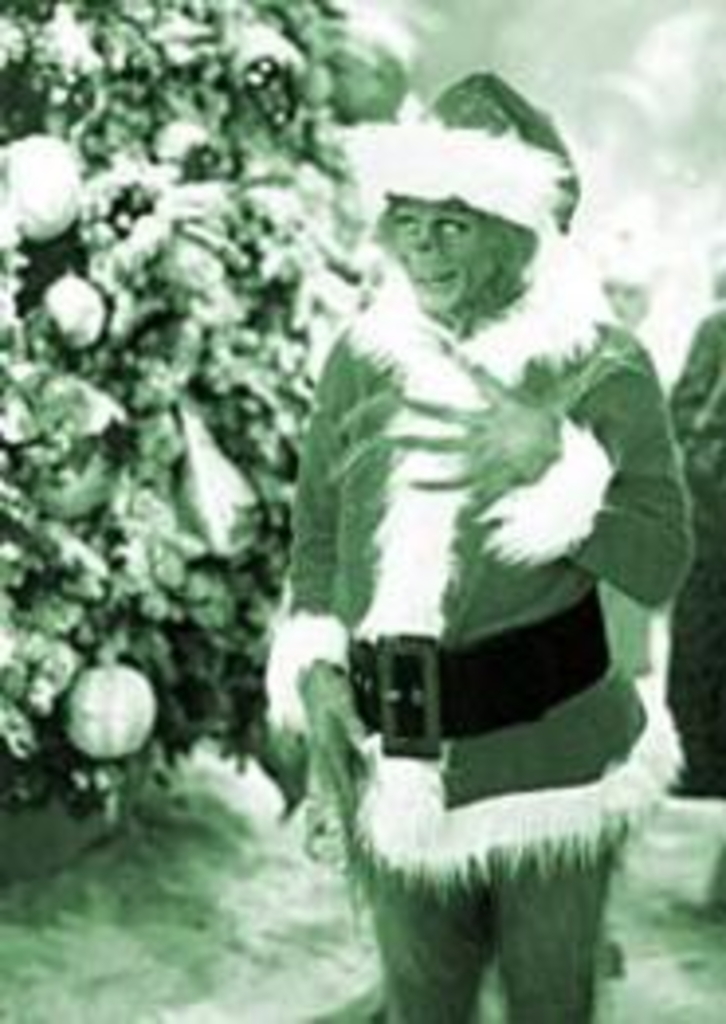 There once was a man, and he called himself Seuss

Who wrote the best children’s books ever produced.

Of his greatness, not even this critic would quarrel.

Alas, he’s now dead, and so all is not groovy,

For someone said, “I know! Let’s make us a movie!

The story’s too short, but who cares about that?

There’ll be toys! And a soundtrack! It’s gonna be phat!”

You ask what director would dare be so dopey?

Why of course! It’s Ron Howard, the one known as Opie.

This is just an example of the Seussian style that the script for Dr. Seuss’ How the Grinch Stole Christmas should have been shooting for. Unsurprisingly, however, there isn’t really anything much resembling a script in play, save for the original book’s text and some of the additions that first appeared in the Chuck Jones cartoon adaptation that Seuss personally approved. That accounts for maybe 30 minutes of the film, tops.

The rest is padding, additional unsubtle bludgeoning of the underlying moral message on the off chance that you somehow missed it, and undoubtedly a good deal of improvisation from star Jim Carrey. (For the sake of those who’ve never read the book — and shame on you if that’s the case — the underlying moral message is that Christmas isn’t just about presents.) With such a loose-cannon comedian as Carrey, it’s hard to know how much of his act was spontaneous, but here’s a clue: The scenes involving just him are funny and full of life. All the other scenes are not.

For those who have read the book, ask yourself the following: At any point did you ever stop and say, “Gee, this is a great book, but what’s the Grinch’s motivation?” Probably not, given that the text (read by Anthony Hopkins in this new version) explicitly advises that when it comes to the Grinch’s hatred of Christmas, “Please don’t ask why. No one quite knows the reason.” Unfortunately for us, Howard isn’t content with this answer and proceeds to give us the most hackneyed backstory he could come up with. Yes, like millions of Hollywood protagonists before him, the Grinch is just a sensitive outsider, mocked for being different, who dreams of getting the girl (Christine Baranski).

It’s possible that this angle could have been made workable; after all, it’s been effective many times before and is essentially the premise of A Christmas Carol and its variations. But the filmmakers don’t pull it off. They can’t even bring themselves to make the Grinch a legitimate bad guy, having him save the life of young Cindy Lou Who (Taylor Momsen) at the beginning of the film. In fact, far from being the “mean one,” he’s really the hero: It’s the Whos down in Who-ville (originally catlike cartoon critters but portrayed here as humans with funny noses and buck teeth) who are shallow, petty materialists. Turns out the Grinch actually redeems them by stealing their presents. This is a Grinch who, midway through the film, delivers a tirade on how Christmas has become all about avarice and greed, then, at the climax, is somehow taken by surprise at the notion that the true spirit of Christmas “doesn’t come from a store.” One imagines it’s pointless to complain about the Grinch merchandise now clogging the aisles at every store around the country.

If there is a center to the film, it’s Carrey, who does his damnedest to save the proceedings from deteriorating into mush. Unrecognizable in his green-hair bodysuit and speaking through his false teeth as if he were Sean Connery attempting an American accent, Carrey gets great mileage out of eating raw onions and broken glass, demonstrating his superiority over a dog, running nuts and bolts through a blender to drown out the sound of Christmas carols, and reading from his day planner (“4:00 — Wallow in self-pity”). Given the amount of money thrown at the on-screen images, Universal should have just gone all out and let Carrey play every role.

The Whos are insufferable bores, and young Momsen may be cute, but do we really need her cuteness to be augmented by extra-large prosthetic teeth, a hat made of cookies and milk, and a truly sickening song? This isn’t Dr. Seuss, it’s Hollywood, and if you have any doubts, just check out the giant explosions, soundtrack laden with hip-yet-cheap artists, and jokes about gay hairdressers, retaining water, and a cat’s clawing someone’s face (the gag so nice they show it twice). It’s not enough for the Grinch to save the presents at the end (and this is hardly a spoiler, given the familiarity of the story, but look away if you don’t want to know): He has to grunt, strain, hoist the overloaded sled into the air, and yell triumphantly, “I gotcha Cindy Lou!”

And yet … there are occasional moments of Seussian inspiration: The clouds above Who-ville, in particular, are in the author’s trademark curly style. A gun that shoots Christmas lights is also nicely inventive, as is a scene of the Grinch literally stealing sugarplums from a child’s dream. And the sets generally look as though they were designed well (think Batman Returns minus the angst); too bad Howard stages the whole thing like a sitcom, so we never really get a good look at all the work that went into the background details.

It’s pretty much a given that this Grinch will please crowds: It purportedly moved Seuss’ widow to tears and garnered a loud ovation at the press screening. No doubt those who dare criticize it will be called Grinches. But if you truly love Theodor Seuss Geisel and wish to honor his memory, stick with the book and the cartoon. If ever an example existed of why we shouldn’t do something just because we can, this is it. A live-action Cat in the Hat starring Tim Allen is apparently now under consideration; what next? A live-action Bugs Bunny starring Freddie Prinze Jr., with Patrick Stewart as Elmer Fudd?