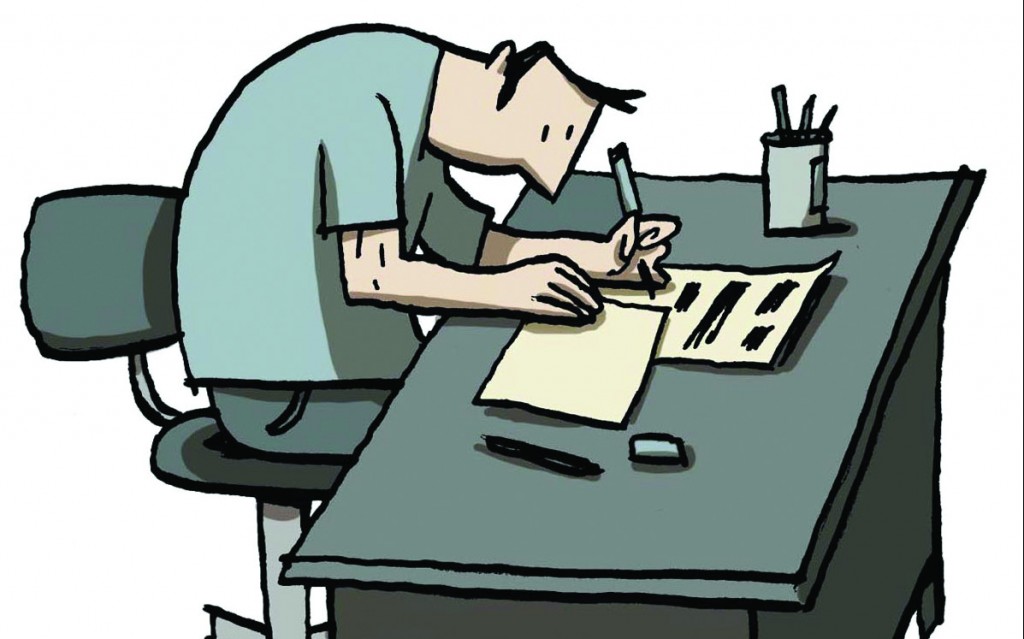 Beginning with 2005’s Pyongyang: A Journey in North Korea and running through 2012’s Jerusalem: Chronicles from the Holy City, French-Canadian graphic novelist Guy Delisle’s travelogue books have been a balm for me during the pandemic, when travel wasn’t possible. His clever and fascinating tales of his adventures in North Korea, China, Burma, and more allowed me to go beyond the borders of Lawrence, and see the world.

While many of the artist’s books in the last decade have been dedicated to parenting advice, along with 2017’s Hostage, the tale of kidnapped MSF volunteer Christophe André, Delisle returned to memoirs with his latest, Factory Summers, released earlier this month by Drawn & Quarterly. Chronicling “the daily rhythms of life in the mill, and the twelve-hour shifts he spent in a hot, noisy building filled with arcane machinery” over the course of three summers in his late teens, it’s a travelogue of a different sort, this time to the past.

I spoke by phone with Guy Delisle last week from his home in Montpellier in the south of France about Factory Summers and his overall career. 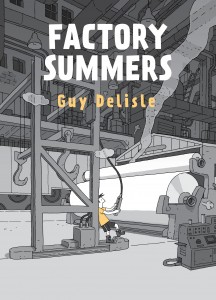 The Pitch: Many of your past books have been travelogues. What made you want to return home and go back to your youth with this latest?

Guy Delisle: Well, I think it had all the ingredients of a traveling book, since I’m not traveling like we used to do anymore. I wanted to do that book a long, long time ago because I always had a flash of that time. And I was thinking, “Man, you know, some of these stories could be fun,” but I never actually sat down and just wrote everything that would come back from these times from my memory. After 50 years old, I thought to myself, “Well, now I can go back and talk about my memoir or my souvenir.” I’m 55, so I said, “Okay, there was no shame about doing a book about your memoir when you’re 55.” 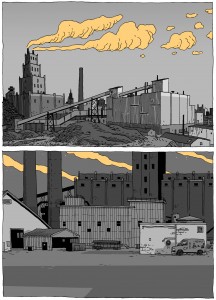 There was all the ingredients: it’s a remote place that nobody goes, you have different kinds of people, these workers, the factory. It’s very exotic for me to draw these pipes and smokes and machineries, so it was kind of a small traveling book for me. When I sat down and I started to note, I at first I thought it wouldn’t be a book – it would be a few short stories or something small, but then as I was writing– because I have a very bad memory–I realized that it was all coming back easily, actually.

After a few days, I had enough material on three pages of short stuff that I wanted to put in the book that I thought, “Hmm. I think I can do a book with that,” and it worked really fast after that.

Was Factory Summers inspired at all by the fact that, in addition to you getting older, your children are getting older and that has offered you a unique perspective on that time?

Yeah, ’cause my son is 17 and I think one of the motivation was, “I’m going to make a book and give it to him and he’ll be able to see at your age, you know, I was working at the factory,” just to see how what kind of old father I can be. Of course, the book evolved a little bit, then—now that I’m thinking about it—probably because my dad passed away as well, a few years ago. I don’t really go into intimate stuff when I write my books. I don’t really like that, and this one is a bit more [intimate]. I don’t think I would have done the book like that if my dad was still alive. Now that he’s gone, I can just talk about him. There’s no hard feeling. 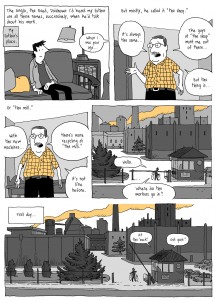 It seems as though the job in the paper factory offered a certain perspective on both your life and that of your father. Were there lasting outcomes from that? I ask because when I was in my late teens, I also worked at a factory with my father and it gave me a very unique perspective on an aspect of his life. I think kids don’t usually think much about the work their parents do, but being able to be there in the same place, I understood certain things.

Well kind of, except it was so different. I mean, he was in the office in technical adjustment and so he was kind of doing an engineer job in a very quiet place, but I was down there with the steam and smoke and grease, so when I had the chance to go and see his place, this is going to be the only time I’m going to be there in my lifetime, which was true. I was not seeing my father a lot so going to his workplace–I mean, if I look at my son, he’s been at my studio so many times he knows exactly what I’m doing and how it works, but for myself and my father, it was a mystery.

After writing that book I got an email from a guy that worked with my father for years and years and he said, “If you want to have any details about your father, you’re welcome to phone me,” and he gave me his phone number. I phoned him immediately and I talked with him for two hours because I have just have no idea and it was very interesting. After that, I phoned my sisters and my brother and said, “Well, did you know that?” 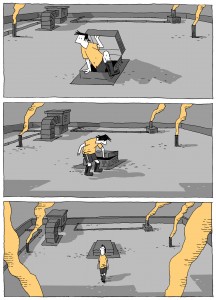 Why is the graphic novel format so appealing? Is it an outgrowth of your work in animation and like using drawings to tell a longer story?

I always wanted to do comics when I was young, but then I forgot about that idea when I worked in animation for years and years, ’cause I stopped reading comics. Then, when I arrive in France–because France is such a country of comics–I would discover the new wave of comics with graphic novels that was happening in the same time in Canada and the States with Drawn & Quarterly. The same thing happened in France. I discovered these guys and I thought, “Wow, this is the kind of comic book drawn by people of my age for the people of my age,” because I stopped reading comic books because they didn’t appeal for me at the time.

Not anymore. These short black and white stories in small format? I thought, “Wow, that’s really interesting,” so I thought to just send them a few short stories and work in animation at the same time. Then, I wrote the Pyongyang book, and then it became a bit of a success so I said, “Well, I’m going to start to just focus on that.”

So it was a slow process, going back to comic books. Then a lot of people went back–people of my age went back to reading comic books and it became a kind of a big wave. When I wrote Pyongyang and Burmese Chronicles, the number of readers was just a big change from 30 years ago. The way people read comics now and how it’s treated in the media has changed a lot. My daughter was having two comic books to read in her college time, one of which was Pyongyang. I thought that’s pretty cool. She didn’t read it. She said, “You can answer the questions ’cause you know the book.” 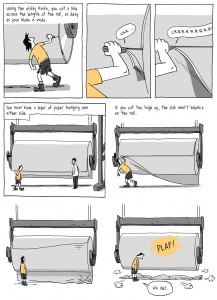 Now that your children are older, how do they view these chronicles of what happened when they were babies?

Well, it’s funny. My daughter is not very curious about that except for the new books. The one that I’m talking about my youth, she’s very interested, but the books that talk about Pyongyang or Jerusalem–it’s kind of too serious for her. She doesn’t read them, because the books have been there all the time, so there’s no rush. They feel like they’ve read it already. My son has read the Jerusalem one since he’s a bit older now, but yeah, but they really liked the bad father’s guide stuff I do. They read the whole thing back and forth.

Do the books change tone for you when they’re translated for, given that they’re originally written in French?

Yeah. I read the English translation cause I can read enough English and I have long discussions with the translator, Helge [Dascher]. She’s very sweet. I said, “Well, could we say this instead of this? Or finish the sentence?” The English translation is very close—as close as possible to what I’ve done in French.

Sometimes, of course, you lose the accent because there was a French-Canadian accent and some specific words that are more French-Canadian than the French people can read. This is kind of local stuff. In Quebec, of course, they just read it normally. I’ve actually done a special translation in Quebec with a French-Canadian publisher, so that was fun. We’ve really used the local language more than in France.

You mentioned when we started talking that you were having to write down your recollections of the things that happened during the time of Factory Summers. I know you also kept an online blog of the events that were in Jerusalem, but do you otherwise keep diaries or some other record of what was happening at the time of the events in your books?

No, not specifically. It started with China because I’ve been twice in China and the second was two years separated from one to the other, doing the same work. I lost memories of the first one so much. I thought, “Well, that’s crazy to travel and to forget about three or four years afterwards most of the stuff I’ve seen or experienced. This time, I’ll go and I’ll take notes.” From that, when I came back, I thought, “Oh, I can make a few stories out of that.”

I was doing short stories for that magazine. That’s how it started. It started as short story, then I really enjoyed doing autobiography books. And I said, “Well, I’m going to do a bit more,” then it became a book. It all started as a short story and then a book. I don’t take notes on a daily basis. Writing, for me, is a good tool for comic books and I’ve really worked on that, after so many books to write.

I wouldn’t do that 100%. I can do that in the morning—put my sentence on the page and really work on the sentence. I like that. I like to have the rhythm and all that, but I wouldn’t be a writer. I really enjoy doing both. In the afternoon, I do the drawing. I’m much more of a drawing person than a writer, but you need to write to do comic books.

I feel like your books, especially the travelogue ones, have definitely been very appealing over the last year and a half when travel wasn’t possible for so many folks.

I saw a few pictures of people reading the Hostage book. I said, “What a creative book to read when you were in a pandemic situation!” I mean I understand much more the people who would read the Burmese Chronicle or Jerusalem to try to travel a bit.

Factory Summers is out now from Drawn & Quarterly.