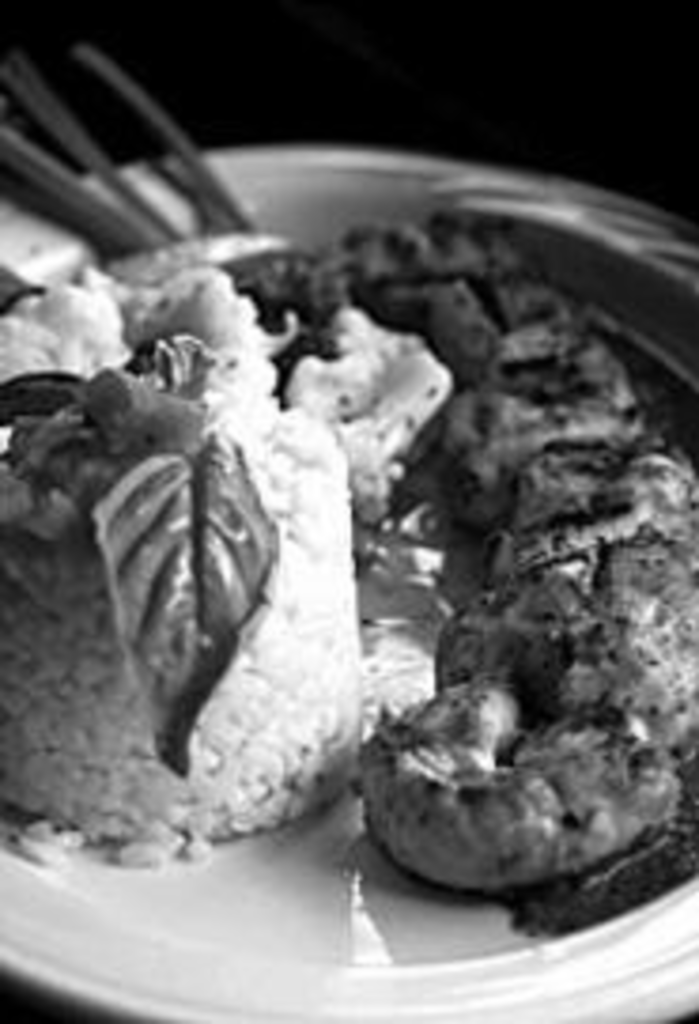 The other day I had a phone call from my energetic 83-year-old Aunt Josephine. She had just finished some incredible task, such as reroofing her garage or chopping down a tree in her back yard, and had taken a brief break to call me from her home in upstate New York. “Are you eating well?” she asked. Too well, I told her. “Don’t get fat,” she warned me — a little too late, I’m afraid — “because you’ll get high cholesterol and have a heart attack like my uncle, the police commissioner, in Sicily. “

My Aunt Josephine, still as lean as a beanpole, has firm ideas about dieting: a good, solid breakfast followed by a hearty lunch, a midafternoon snack (fruit and cookies) and a “simple” dinner that includes a soup or salad, a nice bowl of pasta, some grilled meat, and a healthy dessert, such as spumoni or chocolate cake. “That was how your grandfather ate, and he lived to be 86 years old!”

I could happily follow that diet plan if it meant eating all of my dinners at Osteria Il Centro, the cozy Italian joint at the corner of 51st Street and Main. For the past decade (the anniversary is on St. Patrick’s Day), owner Gregg Johnson has been serving inexpensive dinners in an attractive neighborhood dining room with pretty servers, an eclectic music mix on the sound system — I’ve heard everything from 1980s dance music to 1940s Tommy Dorsey big-band tunes — and really tasty food.

I once described the restaurant’s cuisine to a friend as “accessible Italian,” somewhere in the middle of a continuum with the Olive Garden at one end and Garozzo’s Ristorante at the other. Don’t cringe — it’s a good thing. My Aunt Josephine, a very good cook in her own right, would be thrilled with the eight pasta dishes, the chicken Marsala and the lamb chops put out by Il Centro’s chef, the Mexican-born Jaime Segado. It’s consistent, it’s fresh-tasting, and the portions are more than generous — hell, on many nights I’m thrilled to be eating there.

The restaurant’s name translates roughly as tavern in the center — of the city, I assume, given that it’s in the heart of midtown. And if the ambience is more saloon than salumeria, well, that’s what makes the place so comfortable. The food is middlebrow Italian; anything too sophisticated would be incongruous in this setting, where the dominant decorative feature is the massive wooden bar on the east side of the room, where smokers can congregate over a glass of vino and a sigaretta or two.

Stand-up tables with steep chairs fill the more raucous north side of the tiny dining room (it seats only 72), where smoking is permitted. On the south side, tables and banquettes are swathed in white linen, and the mood is slightly more decorous. On one visit, Bob and I noted that the over-40 patrons (including two tables of prim, middle-aged lesbians in four-button sport coats) preferred the south side. Younger couples headed immediately for the bar side.

“It’s a great people-watching place,” Bob said as he took a visual inventory of the eclectic clientele in the smoking section that night: a couple of sexy twentysomethings in leather jackets; a languid beauty and her chubby sugar daddy; a bearded, sixtyish professor type and his earth-mother companion; and a “mixed” gay couple (a handsome tall guy with his squat, trollish date).

I bit my tongue when the waiter arrived carrying our water glasses by the rims (who trained him?), letting it slide only because he was so perky and personable. Those two qualities almost concealed the glaring truth: He was an awful waiter. Not that it matters here, because none of these kids are clawing their way up to a captain’s job in a four-star bistro. They’re newly minted pasta schleppers, and what they lack in style, they more than make up for in candor. There was, for instance, the hungover waitress who told us about her party the previous night. I wanted to tip her just for giving a brilliant monologue.

That was the night I broke my vow never to order cannelloni in a Kansas City restaurant (because it’s usually prepared so badly). It’s one of Il Centro’s signature dishes, and the two soft crepes wrapped around a filling of sautéed chicken, spinach and mushrooms had a rich, golden tomato cream sauce that made the ubiquitous focaccia bread — the spongy, cheese-flecked wedges come with almost every dish except the desserts — actually necessary. Bob was equally impressed with another standard here, the spiedini di pollo, with a plump chicken breast drenched in garlicky amogia sauce.

“It’s the perfect neighborhood restaurant,” Bob said. “It’s a place where you wish everyone knew your name.”

But I hope no one there remembers how I made a piglet out of myself on the night I visited with Robert and Beatriz, two Johnson Countians who love Il Centro but only dine there if some cultural activity, such as the Kansas City Rep, forces them to drive north of 103rd Street. “We eat here all the time,” Beatriz said, neatly unrolling a red cotton napkin across her lap. “No, we don’t,” Robert corrected her. “But we always like it when we’re here. It’s very warm and unpretentious.”

One of our appetizers had pretensions of glamour, but the shrimp carciofi lived up to them. The six crustaceans were each nestled in a tender artichoke bottom and slathered with garlic-lemon butter that had us reaching for the focaccia again. “When I saw all that butter,” Robert said, “I knew it was going to be good. “

So were the pretty little salads, including a house number with cucumber, carrots and Roma tomatoes tossed with mixed greens in a house-made peppercorn ranch. For the main event, Robert raved over the small, juicy lamb chops, perfectly grilled and lightly splashed with a rosemary-brandy sauce. My own decadent dinner was a bowl of penne pasta dripping with a thick gorgonzola cream sauce, loaded with grilled chicken and sprinkled with crushed walnuts. It wasn’t what Aunt Josephine would have suggested, but she wasn’t around to make me feel guilty.

Beatriz liked the spray of green onion erupting from the steaming garlic-rosemary mashed potatoes alongside her petite medallions of tender veal piccata in a delicate wine-and-caper sauce. “It’s really excellent,” she said. “And surprisingly inexpensive.”

In fact, at those prices it would have been a crime not to order dessert. The whipped Mascarpone cheese in the square of tiramisu was as fluffy as Cool Whip instead of dense and smooth, but there was a vague hint of espresso in there somewhere. Perhaps we’d chosen the wrong thing. “You really should have ordered the raspberry gelato ball,” our waiter said. “It’s really the dessert that we’re famous for.” He pointed to a shiny, softball-shaped mass of hot-pink ice cream that two diners were sharing at another table.

It’s just another reason to go back, now that I’m planning to follow my grandfather’s footsteps and eat a nice, healthy dessert until I’m 86.