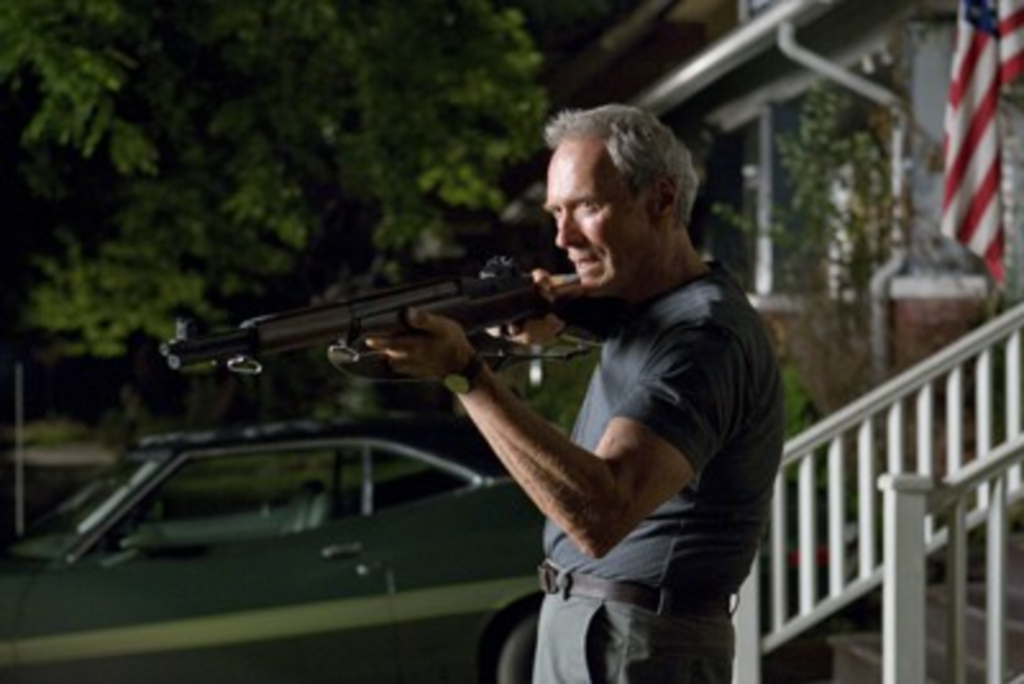 Walt Kowalski growls a lot — a dyspeptic rumble that wells up from deep inside his belly when he catches sight of his midriff-baring teenage granddaughter text-messaging her way through her grandmother’s funeral, or when his good-for-nothing son and daughter-in-law suggest that he sell his house in a gang-infested corner of suburban Detroit and move to one of those retirement homes that look so nice in the brochures.

Like many characters Clint Eastwood has played in his six-decade screen career, Walt Kowalski is a man outside of his own time — a man who senses on some deep, inarticulable level that he has outlived his own usefulness. He’s a little bit of “Dirty Harry” Callahan, brandishing his disgust (and his firearm) at the unsightly blemishes of a valueless society; a little bit of Million Dollar Baby‘s Frankie Dunn, the run-down boxing trainer who’s been as much of a disappointment to himself as to his estranged family; and more than a little bit of Unforgiven‘s William Munny, the has-been gunslinger haunted by the sins of his past but unable to refuse one last ride in the saddle. And much like those movies, Gran Torino (which Eastwood directed from a generally superb script by newcomer Nick Schenk) is about what happens when circumstance hurls Walt Kowalski into direct conflict with the present.

Like Unforgiven, Gran Torino begins with the death of the Eastwood character’s unseen but implicitly saintly wife, after which Walt has eyes only for two things: his faithful canine companion and the gleaming 1972 Ford Gran Torino that sits in his garage, a reminder of the now-defunct assembly line where he spent most of his adult life. Back then, Walt’s neighborhood was an enclave of the blue-collar sons and daughters of European immigrants. Now, those same streets have been taken over by another immigrant population — the Hmong people of China, Thailand and Laos, who fought on “our” side during the CIA’s Vietnam-era shadow wars, even if, to Walt, they’re no different from the “jabbering gooks” he fought against in Korea.

As Walt rants about the “zipperheads” dragging down the neighborhood, brushes off the barely postpubescent priest who comes around to give Walt confession, and growls some more, Gran Torino looks to be shaping up as something of a gently un-P.C., geriatric crowd-pleaser of the Space Cowboys variety. And if that’s all you want or expect of Gran Torino, then that’s exactly what it will be — no matter that Eastwood, for whom moviemaking has long been symbiotic with his love of jazz, merely uses the bass line of a butt-kicking Clint Eastwood action movie to play a series of complex variations on his career-abiding themes.

Mostly, Gran Torino is a two-hander between Walt and the boy next door — an introverted, fatherless Hmong teen, Thao (Bee Vang), who caves to pressure from a gangbanger cousin and tries to steal Walt’s car in a botched initiation rite. Gradually and grudgingly, Walt takes the boy under his wing and takes it upon himself to “man him up” a bit — but only after Walt first steps across the property line and into the Hmong world. At its most didactic, Gran Torino has Walt stare into a mirror and realize that he has more in common with these “foreigners” than he does with his own flesh and blood, but more often, the movie works by subtle implication. Where Korea was Walt’s war, Vietnam was the Hmong’s. Both understand that a man who has seen war can never not be that man, and that the kind of absolution Walt Kowalski seeks won’t be found in a confessional.

This is hardly the first time Eastwood has played a man with a shadowy past, but rarely have the shadows been so vividly illuminated (no matter the director’s trademark preference for chiaroscuro lighting). “We used to stack fucks like you five feet high in Korea and use you for sandbags,” Walt barks while shoving his old M-1 in the face of one of the gang members who continue to terrorize Thao’s family — a moment (one of the finest Eastwood has ever acted) that echoes the image of the Iwo Jima survivor stirred from a nightmare at the start of Flags of Our Fathers. Only, Walt Kowalski is wide awake, and the nightmare is still unfolding.

“The thing that haunts a man most is what he isn’t ordered to do,” Walt says in Gran Torino‘s defining scene, and the thing that has long haunted Eastwood is the legacy of American violence and the false heroic myths on which that legacy has been written. For him, romanticized movie violence long ago lost its allure, and at least since Unforgiven, the act of killing another human being has been depicted as one that leaves a permanent scar on men’s psyches. In Gran Torino, that strain of investigation reaches its apotheosis in an inversion of Unforgiven‘s climactic barroom standoff, a scene that brings the curtain down on Eastwood’s cycle of urban-crime films as hauntingly as the earlier one did on his Westerns.

I’m not sure if Gran Torino is Eastwood’s “best” film, to whatever extent such trivial distinctions matter. Certainly, it’s a rougher, less formally elegant one than the masterly Unforgiven and A Perfect World. But especially when viewed in light of this year’s earlier Changeling (which, on the surface, looks like the more “important” movie), it seems like one of Eastwood’s most personal, right down to his raspy warbling of the self-penned end-credits song. Above all, it feels like a summation of everything he represents as a filmmaker and a movie star, and perhaps also a farewell. “That,” future generations of fathers will someday tell their sons, “is what Clint Eastwood was all about.”