The bill, that advocates say will help prevent opioid abuse, will go into effect Aug. 28 after nearly a decade of failed attempts 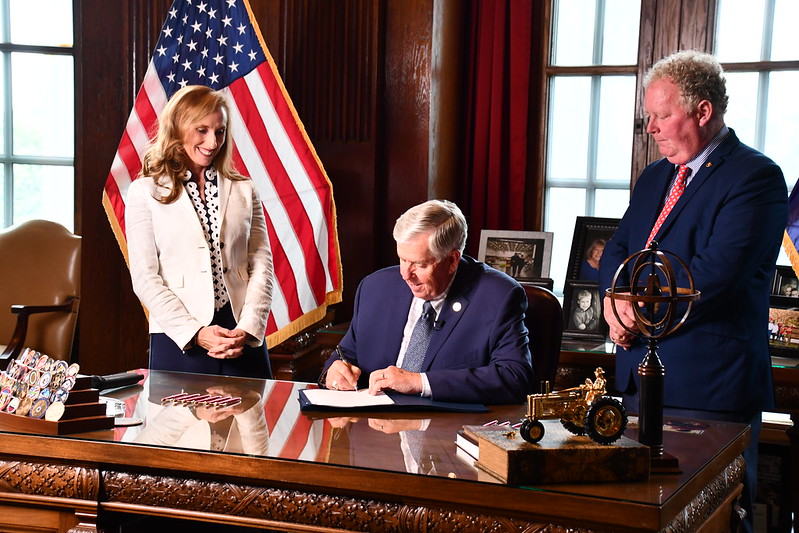 With the swipe of a pen Monday, Missouri will soon become the last state in the nation to establish a statewide prescription drug monitoring program.

The bill establishes a system that allows physicians and pharmacists to track prescriptions and that advocates say will help prevent opioid abuse. It has been a personal crusade for Rehder, whose family has struggled with opioid addiction and who has sponsored the legislation for the last nine years.

“It is a huge blessing to get to be here and experience this moment right now,” Rehder said, later adding: “I love you to our parents who refused to give up, no matter how hurtful their stories were to tell.”

Parson said the bill’s signing has been “long overdue” and referenced the struggles families across the state have endured losing loved ones due to the opioid epidemic.

“Hopefully, all the work they’ve done is going to help somebody else and maybe it won’t be in the same situation that they’re here today with,” Parson said. “But thank goodness they stayed the course and stayed with us over the years to get this finished.”

The “Joint Oversight Task Force of Prescription Drug Monitoring” will be made of six members from various state medical boards that are licensed healthcare professionals, like physicians and pharmacists. The board would oversee the creation of the centralized database and be tasked with entering into a contract with a vendor to collect patient data.

Supporters of the bill argued it’s necessary to monitor patients’ history, with providers required to report prescription data within 24 hours and eventually in real-time. Data collected will include things like the type of prescription, whether it was new or a refill, the amount, and identification info for both the prescriber and patient. Failing to do so could result in a $1,000 fine.

The Centers for Disease Control and Prevention have said that while prescription drug monitoring programs, or PDMPs, are not an end-all solution, they are “among the most promising state-level interventions to improve opioid prescribing” and protect patients at risk.

“If we can save one life—makes a difference,” said Rep. Travis Smith, a Republican from Dora and the bill’s handler in the House.

The bill that was signed into law is based on a compromise lawmakers reached last year, Rehder has previously said.

Parson has supported the bill in years past, but the opposition had remained steadfast.

It appeared to be close to passage last year but was voted down by Democratic lawmakers who have historically supported the bill. They joined Republican lawmakers in opposition, with some concerned about a provision that would have made it a first-degree felony to possess any amount of fentanyl. That provision is not included in the bill passed this year.

Despite familiar concerns around security and privacy issues being raised again this year and attempts to outlaw prescription drug monitoring programs altogether, the bill passed out of the House last month with a 91-64 vote.

“For years, we’ve had folks ask us, ‘Well, take this compromise,’ or ‘Take that compromise,’” Rehder said, “but if it wasn’t a program that worked, we couldn’t do that. Because this is about the families and about working, not about getting legislation passed.”

Once it is up and running, the statewide PDMP that will be established under the bill will supersede any local programs. Currently, a local PDMP program is run by St. Louis County, which covers a little over 80 percent of the Missouri population with other counties using it too, Rehder said previously.

Under the bill, patient data would be purged on a rolling basis and could only be kept for three years. In addition, information in the system cannot be used by law enforcement to prevent someone from obtaining a firearm or as probable cause to obtain a search warrant or arrest in a criminal investigation.

A person who unlawfully accesses or discloses patient data in violation of the bill could be guilty of a Class E felony.