Gov. Mike Parson’s office pushing for a bill that would increase costs of obtaining records from the government. 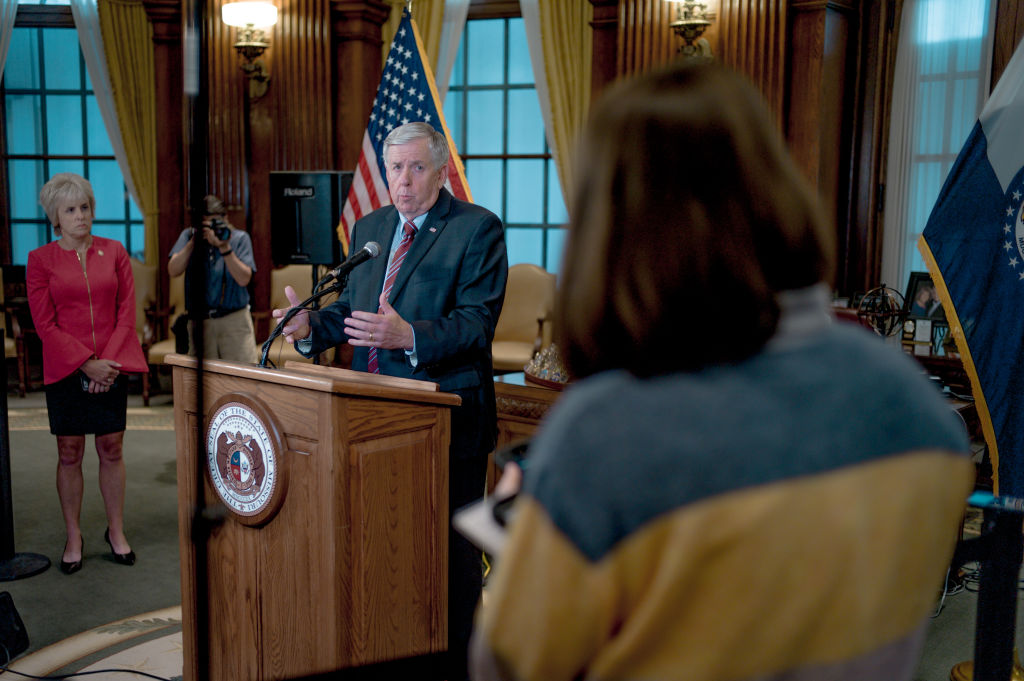 Gov. Mike Parson responds to a media question during a press conference on May 29, 2019 in Jefferson City. // Photo by Jacob Moscovitch/Getty Images

Amending Missouri’s open records law to permit government agencies to withhold more information from the public — and charge more for any records that are turned over — is among Gov. Mike Parson’s priorities for the 2022 legislative session.

The changes, which were outlined in a presentation to Parson’s cabinet that was obtained by The Independent through an open records request, include a proposal to allow government agencies to charge fees for the time attorneys spend reviewing records requested by the public.

Such a change would reverse a recent Missouri Supreme Court ruling against Parson’s office that found attorney review time was not “research time” under the Sunshine Law and thus could not be charged.

The presentation, which was prepared for a Nov. 10 meeting of Parson’s cabinet, included slides on the legislative goals of Parson, who was referred to as “G57.”

The slide on proposed Sunshine Law changes dubbed the proposals as “Good Government” reforms and described the changes as ones that would “benefit political subdivisions, the legislature and state government.”

But transparency advocates say the changes would diminish the public’s ability to hold public institutions accountable.

“If they succeed in accomplishing this wish list of changes, it will make it incredibly difficult and expensive for Missourians to get access to information about what their government is doing,” said Dave Roland, director of litigation for the Freedom Center of Missouri, a libertarian nonprofit that advocates for government transparency.

Kelli Jones, spokeswoman for the governor, did not respond to a request for comment.

A handful of bills have already been filed for consideration during the 2022 legislative session that touch on various changes outlined in Parson’s cabinet presentation.

State Rep. Bruce DeGroot, R-Ellisville, once again filed legislation that aims to shield constituents’ email addresses and telephone numbers from public disclosure if they were submitted for the sole purpose of receiving newsletters or other alerts.

The bill, which was passed by both the Senate and House last year, was ultimately vetoed by Parson, in part, due to a subsequent court ruling related to the Sunshine Law and provisions related to the Office of Child Advocate’s authority that were added later in the session.

This year’s bill includes many previously proposed provisions, but it also includes new measures that DeGroot said were suggested by Parson’s office over the summer.

“I really liked the House version last year,” DeGroot said, “and then the governor came to me, and obviously, this was something that was important to him.”

DeGroot said it’s not his intent to have information hidden from the public. He hopes the bill will lead to a conversation on finding a “happy medium” between information being made accessible without overburdening government agencies.

“We have to have good investigative reporting going on on government, and that’s healthy, in my opinion,” DeGroot said. “On the other hand, sometimes some of these requests can become so overly burdensome, it can grind government to a halt with some frivolous requests.” 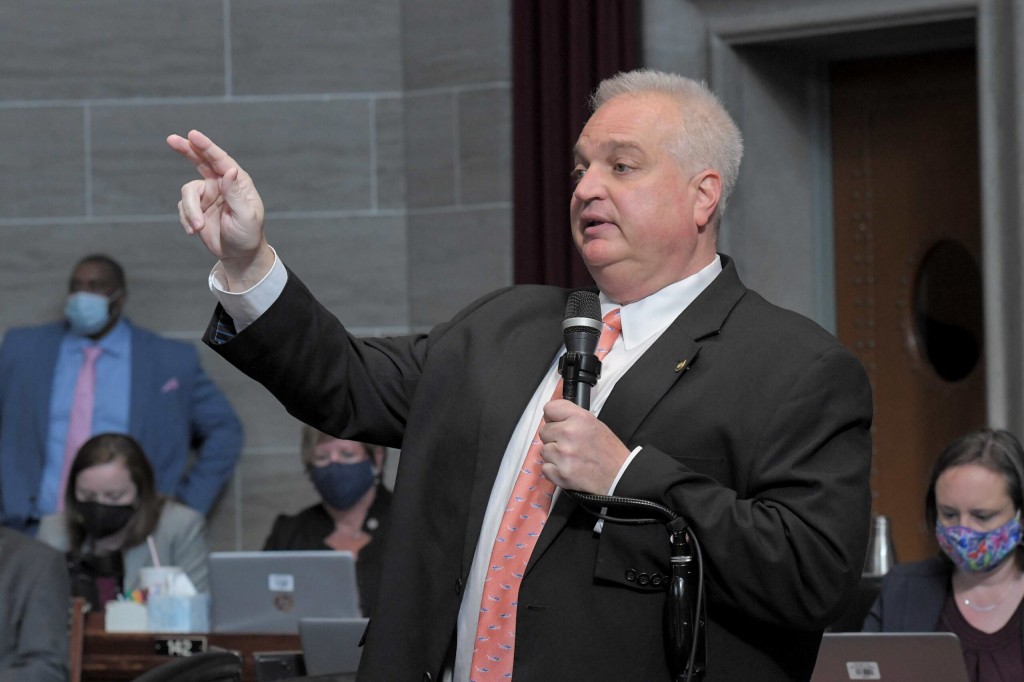 Included in DeGroot’s bill is a provision that allows a government agency to charge a member of the public the hourly rate of the lowest paid attorney used to conduct research or review requested records.

Charging for attorney review time was among the proposals outlined in the cabinet presentation, which justified the change by saying “every sunshine response has two legal questions; is the record responsive and is the record open.”

Time attorneys spend reviewing public records was previously a common charge that often resulted in massive costs for the public to obtain records.

However, in June the Missouri Supreme Court unanimously ruled that the Sunshine Law does not authorize these types of fees. It’s a ruling that Missouri Attorney General Eric Schmitt’s office recently office cited in a Sunshine Law lawsuit seeking school records related to curriculum.

The ruling stemmed from a case alleging Parson’s office improperly redacted records, charged exorbitant fees and knowingly and purposely violated the state’s open records law. Since the June ruling, the governor’s office has refunded attorneys’ fees paid by those whose requests were pending when the court’s decision was handed down.

That case was originally filed by Elad Gross, a lawyer and former Democratic candidate for attorney general. He argued charging fees for attorney review time was illegal and said the state’s highest court affirmed that was the case.

“And now that governments have less ways of really scaring and deterring regular folks from accessing our own records, they’re trying to make that the law in this state,” Gross said. “And I think it’s wrong.”

Roland said allowing for such charges would be “catastrophic” to citizens’ efforts to obtain public records, and said if state statute is amended to allow for attorney review time to be charged, there wouldn’t be recourse through the courts like in Gross’ case.

Some of the categories of records the cabinet presentation outlined making exempt from public disclosure — like shielding constituents’ ​​personal info — lawmakers have proposed closing for years.

It’s also an issue that both state lawmakers and the Parson administration have previously been challenged on.

In 2019, Schmitt’s office said Parson should stop citing the First Amendment of the U.S. Constitution as justification to redact telephone numbers, addresses and email addresses of private citizens who reached out to the governor’s office.

A 2019 lawsuit filed by Mark Pedroli, founder of the Sunshine and Government Accountability Project, challenges a House rule that allows lawmakers to redact records or withhold them completely. The case is ongoing, with a hearing scheduled for later this month.

Jean Maneke, an attorney for the Missouri Press Association, said she was disappointed in the governor’s office’s belief that measures to restrict access to public records are urgently needed to make state government better.

“Hiding government information is not going to increase the public’s faith in its leaders,” Maneke said.

In addition to some of the provisions that have garnered traction in recent years — such as shielding information on customers’ utility bills and evacuation and lockdown procedures — DeGroot’s bill would also allow for the closure of addresses, telephone numbers and email addresses of job applicants, employees, customers and constituents of governmental bodies.

That same info could also be withheld for elected officials or foreign leaders if it would jeopardize their safety.

Transitory records, which the bill defines as including draft versions of documents, would not be deemed a public record under the bill, and it would also redefine what counts as “public business” or a public meeting.

Roland said the changes outlined in the cabinet presentation reveal a “general hostility of people in power to allowing citizens to look over their shoulders.”

“I think this is a systemic problem, and one that the Sunshine Law was designed to address,” Roland said, later adding: “We certainly don’t need more roadblocks to government transparency.”