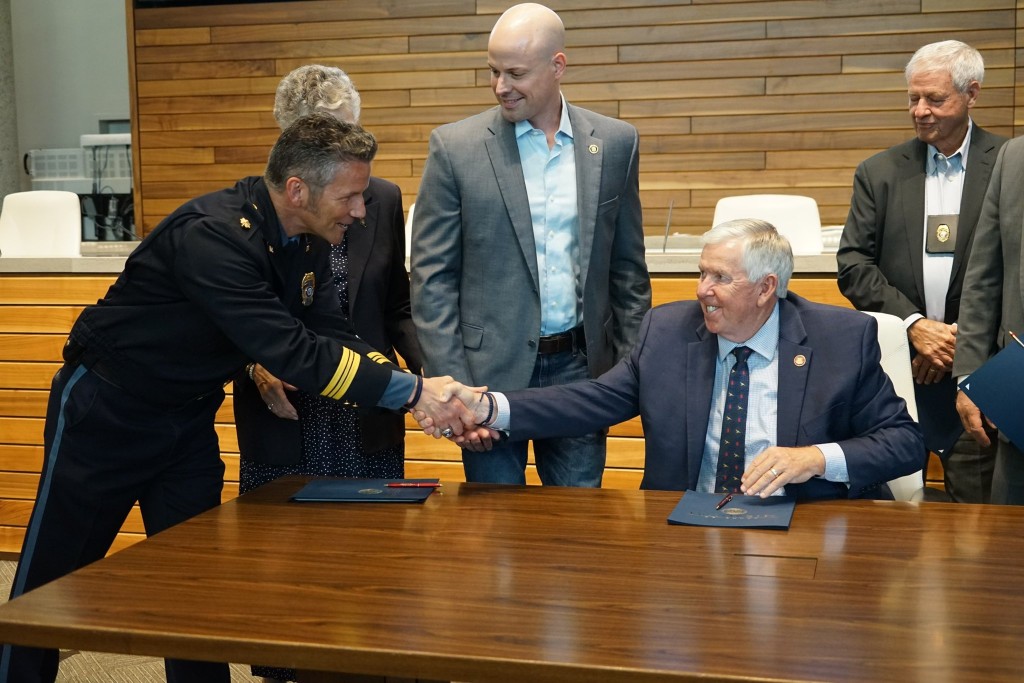 Gov. Mike Parson signed legislation Monday that would increase the amount of funding Kansas City is required to put towards its police department – if voters approve a proposed constitutional amendment in November.

The bill, sponsored by Sen. Tony Luetkemeyer, R-Parkville, raises the portion of Kansas City’s budget that must be devoted to the police department from 20% to 25% — a $65.2 million increase.

However, under current law, the Missouri legislature cannot require a city to increase an activity or service beyond that mandated by existing law, unless a state appropriation is made to pay the city for any increased costs.

In May, state legislators also approved a proposed constitutional amendment that, if approved by the voters in November, would provide an exception for the Kansas City Police.

Kansas City Mayor Quinton Lucas said the city council already regularly funds the police department above the 25% threshold, so the new mandate will not immediately increase the police budget.

“Instead, the bill represents the raw exercise of power by state lawmakers over the people of Kansas City, as the only people in our state without the ability to influence how one quarter of our budget is spent,” Lucas said.

Lucas was referring to the fact that Kansas City is the only city in the state where the local elected officials, by law, have almost no authority in how the police department’s budget is spent. A board of commissioners appointed by the governor makes those decisions.

The push for the funding increase was inspired by a move from local elected officials last year that generated outrage among Republicans.

Last spring, Kansas City Mayor Quinton Lucas and some city council members attempted to designate $42 million within the police budget for things like community engagement and intervention — but a judge ultimately ruled they didn’t have that authority.

“When a majority of the City Council voted to strip $42 million from KCPD’s budget in 2021, I knew I had to do something to prevent future efforts to defund the police,” Luetkemeyer said in a statement Tuesday.

However, Lucas has said it’s not the council members who have repeatedly “defunded” police salaries — it’s the board of commissioners.

“Since myself and the City Council took greater control of police budgeting, officers have received pay raises, new recruiting classes have begun, and officer morale has increased,” Lucas said. “The bill violates the Missouri Constitution and will be challenged in court.”