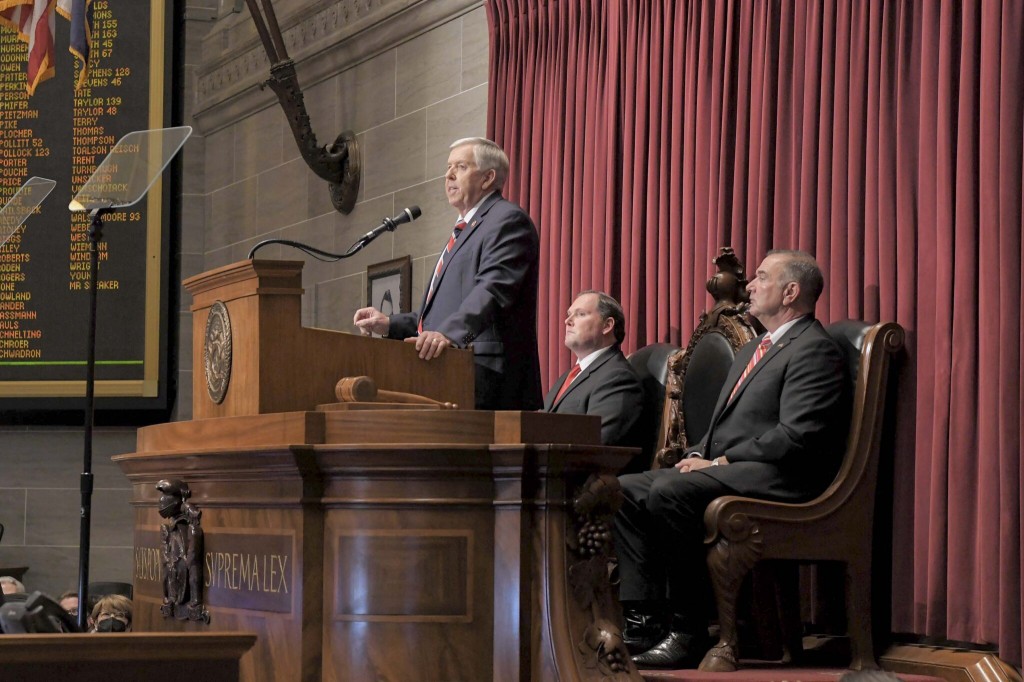 Gov. Mike Parson praised his administration’s handling of the still unfolding COVID-19 pandemic Wednesday, telling a joint session of the Missouri General Assembly that the state has emerged ready to make long term investments in its future.

“The bottom line is Missouri’s economy is strong,” Parson said in his annual State of the State address. “With a historic budget surplus and federal dollars coming to our state, we want to build on our past momentum to capture even greater opportunities for the future of Missourians.”

Last year’s State of the State speech was nearly cancelled because of a COVID-19 outbreak in the state Capitol. Parson wasn’t able to deliver his remarks in the House chamber and instead spoke in the smaller Missouri Senate chamber.

With COVID infections once more on the rise — around Missouri and in the statehouse — the governor’s office was concerned an outbreak could upend its plans again this year.

The state is seeing record daily coronavirus infections and near-peak COVID-19 caseloads in hospitals. Nearly 17,000 Missourians have died of COVID-19 since the pandemic began, including more than 8,000 in 2021.

Members of Parson’s cabinet were told last week that preparations were in place if the speech had to be moved to the Senate.

“We will have a seating chart for the Senate ready in case it’s needed,” the governor’s office said in a powerpoint presentation at last week’s cabinet meeting.

Much has improved since he last delivered his State of the State address a year ago, Parson said Wednesday.

“When I stood before you last year, our limited supply of COVID-19 vaccines were available for only a small group of Missourians. No one had a roadmap or a playbook, and we knew we faced difficult times ahead,” he said.

“Nevertheless, state government accepted the challenges and prevailed by focusing on fairness in our vaccine distribution efforts,” Parson said. “While there will always be endless critics to tell us how we could have done it better, the facts are we were the ones in the arena. We made the tough decisions and never cowered to the challenge.”

He encouraged all Missourians to “consider vaccination.”

“We have worked tirelessly to ensure that vaccines are available to every Missourian that wants one,” he said.

Missouri never “had state mandates or forced businesses, schools or churches to close,” he said, emphasizing that he will never support mandates.

Parson has taken criticism from public health and hospital leaders for his administration’s response to the pandemic, from his hesitancy to support some mitigation efforts in the outbreak’s early stages to his muted response to the delta variant surge this summer to his decision to allow the state of emergency to lapse at a time when hospitals were struggling under skyrocketing caseloads caused by the omicron variant.

“Today the governor claimed victory over COVID while children like my own here today are wandering the hallways because our school is shut down,” said Quade, D-Springfield. “Just like so many working parents are currently struggling day to day while schools continue to close their doors.”

The governor said Wednesday that there is much more positive news in Missouri that isn’t covered by the media because it “doesn’t sell headlines.”

“But rest assured,” he said. “we refuse to discount the good things happening in Missouri.”

He ticked through numerous policy proposals, with most focused on how to spend billions in state budget surplus and federal funds. Among his ideas included investments in workforce development programs, increased teacher pay and infrastructure projects across the state.

While I do not agree with the massive expansion of federal debt, the responsibility falls to us to invest wisely and make smart decisions,” he said. “We must do what the federal government cannot.”

Speaking for Senate Democrats Wednesday, Sen. Lauren Arthur said the state has “everything we need right now to put this pandemic behind us if we choose to act.”

“It’s time leaders listen to those who are vaccinated and ready to move forward,” Arthur said. “The vaccines work. They are the best protection against hospitalizations and death. They are free. They are widely available. And they are safe.”

She expressed support for a proposal by the governor to raise the pay of state employees “to prevent massive turnover and service disruptions.” She called for lawmakers to cap the cost of insulin and expand early childhood education.

Parson ended his speech with a hopeful call to action.