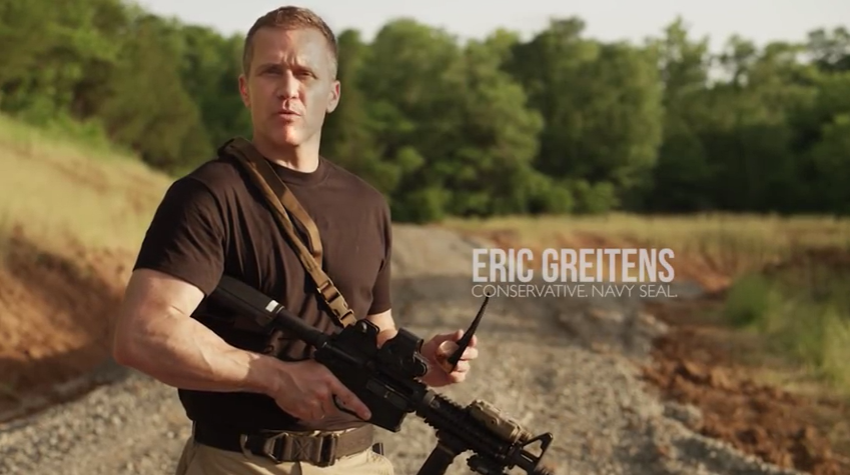 Eric Greitens was born to be an action figure. That Navy SEAL bio. Those campaign ads that promised to parachute a commando into the governor’s mansion. From the very recent start of his political career, the man has been a Schwarzenegger in search of a Terminator — a vehicle truly suited to his talents.

The governor has at last found his blockbuster — with the state of Missouri as his backdrop and all of its citizens as extras.

The plot is nothing special: Greitens calls the Missouri General Assembly into special session to work on a measure that he frames as a jobs bill. Sure, there’s a little intrigue: The measure is actually a drag for consumers and a gift to Ameren, Missouri’s largest utility company — and one of Greitens’ largest campaign contributors. Of course, the scenes between Greitens and Amren have been cut out of this movie.

One part Greitens wants you to see was shot last weekend, and you can already see it on his Facebook page. Hundreds of people are crowded into a warehouse, within sight of the shuttered Noranda aluminum smelter in New Madrid, Missouri. They’re listening to Don Rone, who represents the area in the Missouri House, talk about his efforts to bring jobs back to the region. All the legislature has to do is pass Rone’s bill, allowing big utility companies to bypass scrutiny by the Public Service Commission and negotiate their own rates for certain customers.

The House fell into line, and victory was within sight. Then came gridlock in the Senate, Rone says. There was a filibuster. There was despair. And then…

“Guess who came to the floor?” Rone asks the people. “This man right here.”

Rone then brings to center stage Missouri’s Last Action Hero, ready to greet his fans. Clad in his trademark blue oxford shirt, its collar unable to hold the man’s muscular neck (no tie does him justice anyway), Greitens pulls Rone into a brotherly embrace, pounding him on the back. He appears choked up. Stirring music plays over the footage as the governor begins to speak.

“Too many people have lost jobs in southeast Missouri,” Greitens says. This is true; about 850 jobs were lost when the Noranda smelter closed last year, mostly because of competition from cheaper aluminum materials made in China.

“Now we got something real simple in front of us,” the governor continues. “We got a company that wants to come to southeast Missouri and make steel.” This actually may not be true. Greitens and local officials say a company wants to open a steel mill in the area, but they won’t disclose the name of the business.

“But we had some career politicians who decided they wanted to put their personal, pitiful, petty, political privileges ahead of jobs for the people,” he says, knowing just which words to punch. “The legislative session was gonna end, and they figured they’d just go home.”

The video cuts to a woman in the audience, shaking her head with the disgust of someone forced to tolerate personal, pitiful pettiness. The governor goes on: “They figured they would run out the clock and that we would forget.”

Greitens clenches his jaw, raises a fist. “Well, you know what?” he bellows. “They figured wrong!”

“I canceled their vacations and I’m bringing them back to do their jobs! And we’re gonna tell the politicians: “No excuses. Get to work!’”

Greitens loves that vacation line — undoubtedly because it deeply offends lawmakers who get paid about $30,000 for their service and who had looked forward to catching up with families and other jobs after a grueling legislative session. The governor turns on his high-voltage smile. The audience — what we can see of it — appears rapt. He nods at his own power. No need to mention the worry that Ameren could increase rates for ordinary consumers to make up for the break it would be giving the as-yet-unnamed steel company. Or the $130,000 that Ameren donated to Greitens’ 2016 campaign. Or whatever amount the company might have given to the dark-money conduit set up to benefit the governor, a star who demands ethics for everyone but himself.

The camera finds a woman crying. Greitens wades into the crowd and wraps her in his big, chiseled arms.

Since his big movie premiere, the governor has indulged in more theatrics. Greitens’ dark-money group, A New Missouri, paid to bus hundreds of people to Jefferson City for rallies in the Capitol. His people taped placards to the office doors of senators who have appeared skeptical about the proposed giveaway to Ameren.

The only person who has gone off script is Greitens himself. In a radio interview this week, he defended A New Missouri’s refusal to disclose the names of its donors by pointing out that, well, people vote in secret, too. “Nobody calls that dark voting,” he said. With that inane comparison, Greitens shows Missourians why he so rarely agrees to interviews with the media. Too dangerous. Too much improvisation.

Still, the dark-voting gaffe amounts to a mere a blip. Greitens has the state Senate in a bind: If members refuse to pass the Ameren-welfare bill, the governor and his dark-money team seem set to harass them into oblivion. If they pass the bill, all they’ll have to look forward to is an inevitable series of Greitens sequels — with huge casts of suffering Missouri extras and a climax aimed at the White House.