Goth’s not (un)dead at the Riot Room 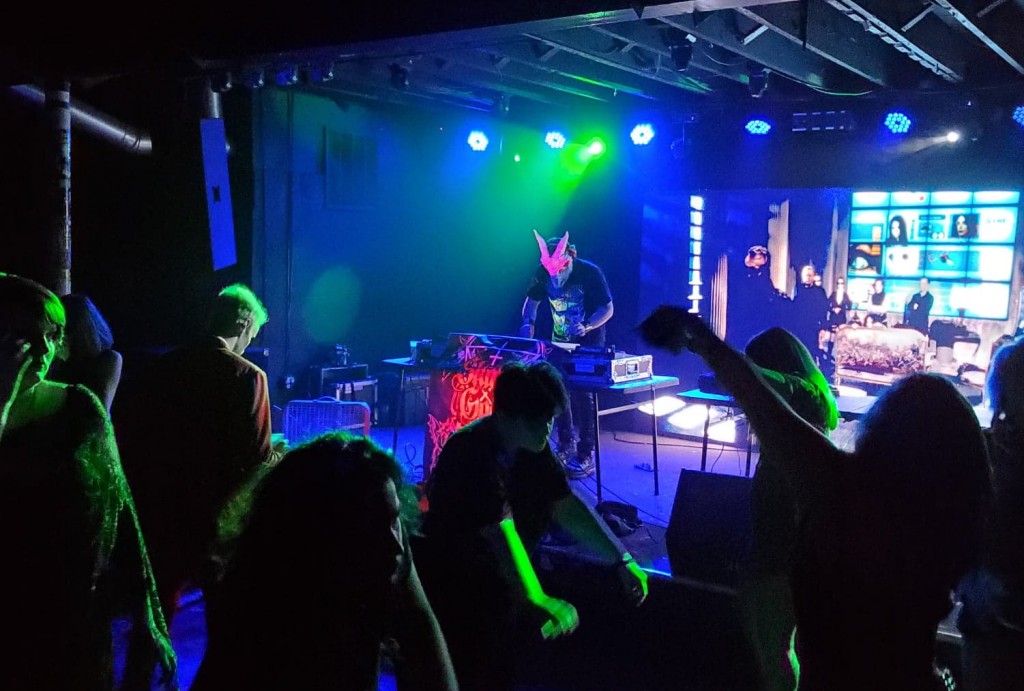 The Riot Room has long been a center of the alternative scene in Kansas City. But since the pandemic, a more sinister, but surprisingly friendly clientele has chosen it for Saturday night haunts. That group–the Kansas City Goths, lead by local organizer Bryant Waner–are doing some wonderfully spooky things on Saturday nights.

For those unaware, goth is a subculture and music style which emphasizes the darker side of life. When we sat down with Bryant, he explained: “Goth culture comes from punk and the idea of being in opposition to authority and attracted to the macabre. Goths may find their interests are a bit outside of society, like being attracted to the afterlife, spooky things, horror movies, serial killers, and skulls. For me, it is about an aesthetic that exudes an appreciation and attraction to death and the dying part of life and being fascinated by it.”

So, you may be wondering what exactly is going down at the Riot Room? These events, orchestrated by Bryant and his crew of DJs and organizers are experiential musical events, featuring opportunities for dancing and drinking—socially distanced of course. Bryant’s wife, Salyara La Reine Rouge, explained to us that, in addition to Riot Room’s rigorous following of social distancing and sanitation protocols (they have hand – and mouth sanitizer), “Most of the goths are loving the masks and already enjoy dancing distant from one another.”

These events truly are something spectacular. In addition to being a one-of-a-kind musical experience, each of the themed events present an ambience which feels as though you’ve died and gone to an afterlife that while spooky, is majestic as heck.

Currently, the KC Goths are running an event every Saturday at Riot Room. These events are as follows:

Vampire, the first Saturday, is a goth night for everyone. This is the stuff most people know instinctively that fits in the Goth subculture. Hot Topic, Bauhaus, everything spooky and spoopy is welcome. People wear fangs, but it’s not required, just come and have a good time. Sometimes there is performance art.

80’s Night, the second Saturday, is what you’d expect—big hair. Previously hosted at the Brick, the 80s party has moved over to Riot Room, where DJ Rico spins new-wave, industrial, 80’s, occasionally a little 90’s. People come as they are, punk, goth, and rock out.

The Atomic Concubine party on third Saturdays of the month is where it starts to get weird. In a good way. It’s the new belle at the ball. Spinning exclusively synthwave and dark synthwave music, it harkens to the sounds of the 80s with a new twist. Dark heavy grooves. Imagine if Goth went neon. Blade Runner and the Post Apocalyptic future of the 1980s. The future is now, and Atomic Concubine is everything you want to hear.

Finally, the fourth Saturday rotates between two themes, Ritual, and Industrial Revolution. Ritual captures the occult and spooky vibe that has been embraced by the online goth community. Blending EDM and EBM, as well witchhouse, synthwave, Bryant and company have found a marriage of newer dance grooves that alludes to heavy dark and oozing basses with hard kick drums. It is likely you will hear Crystal Castles as often as The Dead Can Dance. The alternate Saturday features Industrial Revolution, where the DJ’s mix goth songs from the 90s and 2000s with gothic songs popularized by movie soundtracks.

But Bryant is not alone in making these events happen. He comes with a full cast of musically talented goths, including:

And, as you’ve probably picked up, Bryant has a knack for the dramatic and the daring. As such, alongside his beautiful wife, Salyara La Reine Rouge, and friend Joey Bahamundi, he’s created an operatic vampiric musical group: Discord. The band, which has opened for bands such as Voltaire, Covenant, and Dance with the Dead has been described as “Music vampires like to f***” too”.

Bryant explained that “We take classical music and infuse it with modern dance grooves. We create a new sound that accompasses the old world with the new. It is an amalgamation of opera, electronic dance music with the grandiosity of an orchestra, and the attitude of a rock band. This is the music we think thousand-year-old vampires would love.”

And, after listening to a few of their songs, which feature vocals from Salyara, we can confirm that they are pretty incredible. You can find out more about KC Goths by following them on Facebook and Discord on their website.