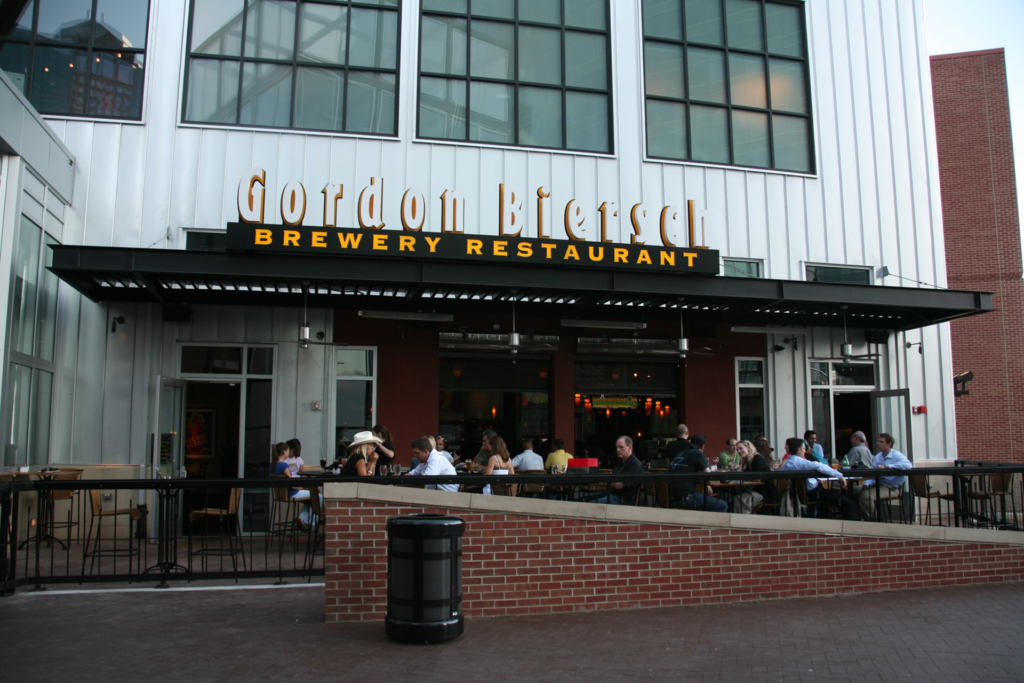 Let me say this right off the bat: I came to Gordon Biersch Brewery Restaurant not to drink but to eat.

“Everything on the menu is made from scratch in our kitchen,” announced the serious young waiter who handed menus to Addison, Franklin and me on my first visit. He then lowered his voice: “Except the pulled pork and the pot stickers. But those dishes are made by outside vendors to our specifications.”

It was a late Friday afternoon, long after the lunch rush, but Gordon Biersch was still bustling. From our vantage point in one of the comfortable upholstered booths, the dining room seemed sliced into odd angles by the layout of tables and long glass dividers.

Soon, our waiter delivered the starter that Franklin had ordered: a bowl piled with flash-fried artichoke hearts. This was, we were told, one of the signature dishes of the Biersch breweries. I stuck my fork right into the bowl and skewered what turned out to be one of the most delicious fried vegetables — really a pumped-up thistle bud — I’d ever tasted. These Parmesan-dusted delicacies were lightly crispy on the outside, moist and meaty inside.

While I dipped one after another of the delectable hearts into a tangy lemon aïoli, Addison was giving the crowd a once-over. “Mostly tourists, I think,” he said. It was definitely a motley crew of middle-aged suburbanites, downtown office workers, a couple of thirtysomethings and a few families. “This is the kind of place that would do well in Johnson County,” he concluded.

Just then, our server piped in to announce: “We’re getting ready to open a new restaurant later this summer at 135th Street and Metcalf.”

Well, there you go. Considering how this Chattanooga chain is growing, it’s easy to discern the culinary influence of success stories such as the Cheesecake Factory and Bonefish Grill. At Gordon Biersch, the price point is reasonable; the portions are generous; and the dishes, even the more inventive ones, aren’t too clever for their own good.

For lunch, Addison ordered goat-cheese ravioli in brown butter sauce. He raved about the coaster-sized squares of pasta, modestly filled with goat cheese and glistening with a sheen of slightly caramelized butter, a smattering of pine nuts, a dash of rosemary and sautéed mushrooms. I thought it was bland, though — the goat cheese was so tasteless, it could have been Philadelphia cream cheese. Still, it was superior to my lunch of beer-battered fish and chips. The batter was made with one of Biersch’s brews, so I had high hopes for the fried fish. Alas, it didn’t come close to the exceptional — and authentic — fish and chips at Raglan Road just around the corner. The heavily coated white fish was appealingly crunchy, but its fried armor resembled that of a Mrs. Paul’s fish stick. And the garlic fries that served as “chips” were perfectly fine if you didn’t care for much garlic in your garlic fries.

Franklin, who is fussy about steak frites — the Gallic tradition of juicy beefsteak and crispy fried spuds — wasn’t impressed by the Gordon Biersch beef: a flat-iron steak marinated in mildly sweet Marzen lager. Ideally, the flat-iron cut shouldn’t require much in the way of a marinade; it’s nice and tender if the sinewy gristle running through the center of the shoulder cut is trimmed away. But Franklin frowned as he sawed into one of the seemingly succulent slices lolling on a gaggle of fries. “This steak’s a little on the chewy side,” he said. Maybe he should have ordered the Asian version, drizzled with teriyaki sauce and sided with mashed potatoes and asparagus.

Our desserts were better than our entrées, which says volumes, though the warm-apple bread pudding in “sticky bun caramel sauce” didn’t have much in the way of visual style (or apples, for that matter). The layered carrot cake was impressive, though: a slab so big that Franklin took much of it home and was still nibbling on it three days later.

In fact, Franklin was probably still eating carrot cake when I went back to Gordon Biersch for dinner with Shelby and Bob. These two restaurant-industry veterans were impressed with the way the brewery looked and with our cool, efficient young server, Courtney, who had started her career at Applebee’s. She told us Gordon Biersch was a vast improvement — which I assured her was an understatement. That said, the Chef’s Sampler of starters could have fit right in on any Applebee’s menu: petite chicken wings slathered in a sticky chili-ginger glaze; shrimp-and-chicken pot stickers that were oddly fishy tasting; and flaky Southwest egg rolls crammed with chicken, corn, red peppers and cheese.

Bob had rubbed his hands together at the thought of steak medallions and crab-stuffed shrimp, one of the five “house specialties” on the dinner menu. The “medallions” of grilled beef were aptly named: not much bigger than 50-cent pieces, though tender and luscious. But the stuffed shrimp, I’m sorry to say, were pallid balls of a dreary crab concoction wobbling on top of a butterflied crustacean — possibly the least attractive presentation of seafood ever. After two bites, Bob pushed the shrimp to the side of his plate.

My meatloaf dinner wasn’t going to win any awards, either, for looks or taste. The slices were artfully etched with grill marks but bland even when dipped in the shiny brown gravy at the side of the plate. “It’s like something from a cheap diner,” Shelby sniffed. He’d almost ordered it himself, until our server advised him that the pecan-crusted chicken was one of Biersch’s best-selling entrées. And it’s true that these pounded chicken breasts might indeed seem downright tasty after a few rounds of ale — particularly with that thick, crunchy crust of chopped, fried pecans. Stone-cold sober, however, they were less appealing. I thought the bird was too thin and dry, and Shelby hated the cornstarch-based lemon sauce — not mentioned on the menu — and the medley of soggy julienne vegetables.

Once again, the towering dessert was the highlight: a thick stack of amazingly moist chocolate layer cake enrobed in fudgy frosting. I don’t know if there was beer in the batter, but it was plenty intoxicating.

I really wanted to like Gordon Biersch. The restaurant has a lot going for it. The crew at the hostess desk are friendly and personable, the servers are young and surprisingly well-trained, and the dining room is bright and attractive. A friend of mine who is into the art of microbrewed beverages insists that Gordon Biersch’s Marzen lager is practically the nectar of the gods. “And if you drink enough of it,” he confessed to me, “all the food tastes fantastic.”

I know nothing of the art of brewing beer, but I do know that it’s difficult for even the most organized kitchen to pull off consistent perfection from an ambitiously large menu. Gordon Biersch seems to put out as many disappointing clinkers as excellent dishes. But then, I’m not drinking.