The House voted overwhelmingly to override four of Gov. Mike Parson’s vetoes, but the effort fizzled in the Senate 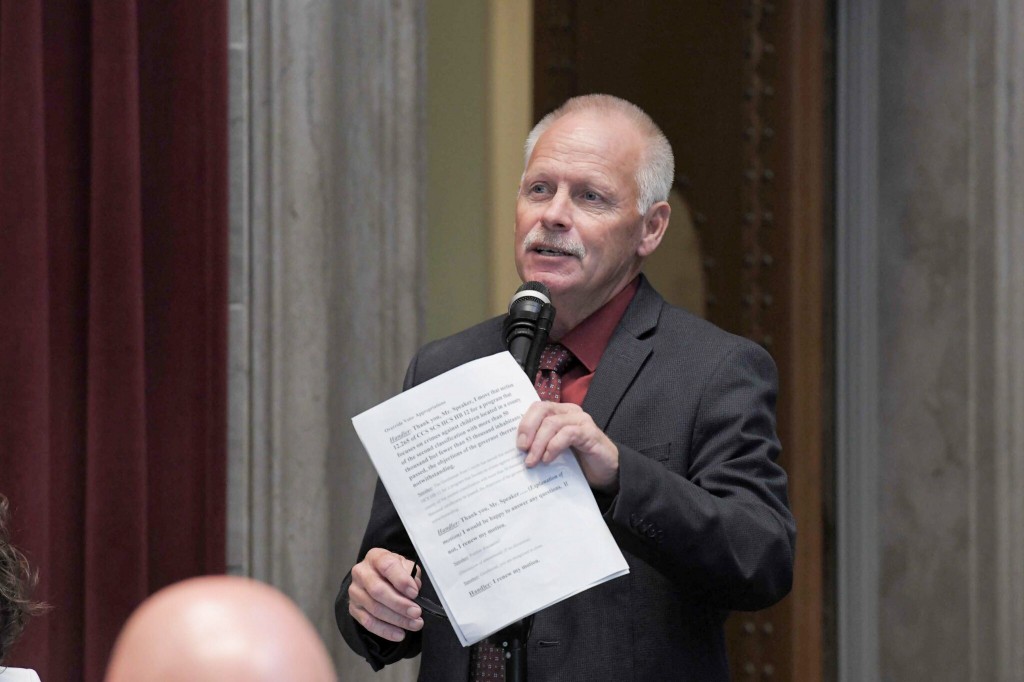 Missouri Rep. Randy Pietzman nearly choked on his words as he tried Wednesday to explain why $300,000 means so much to the children of Lincoln County.

Pietzman, R-Troy, was asking the Missouri House to override Gov. Mike Parson’s veto of that funding in the state budget, which was slated to add two investigators and a prosecutor in the county to battle sex crimes against children.

The fast-growing county – only three counties grew faster in the past decade – doesn’t have the resources to keep up, Pietzman said.

Parson vetoed the funding, he wrote in a letter to lawmakers in July, because he did not recommend the money be included in the budget and because “it is an earmark for the benefit of a single county.”

No one from Parson’s office asked for information about the appropriation, Pietzman said, and only when he began the push to override the veto did he hear from the governor’s staff.

The offer was to help find grants to pay for the program, he said.

“Screw those guys,” he said of the governor and his staff. “I am fighting to the end for these kids.”

Despite the political situation—a Republican supermajority and a Republican governor—Pietzman won. And won big, as 155 of 163 House members voted to override the governor.

It was, however, a short-lived victory.

Despite the overwhelming support in the House, the effort to override Parson fizzled in the Senate, where the factions that have plagued the chamber for the entire year once again resurfaced.

Voting a few hours later, and after Sen. Jeanie Riddle, R-Mokane, told the body that she was satisfied a federal grant would get the same amount to Lincoln County sooner, the veto was upheld on 16-13 vote. An override vote requires 23 votes in the Senate.

The override on the Lincoln County funds was one of four House votes to override Parson during the annual veto session on Wednesday.

The Senate, however, only voted on one other item: $150,000 to reimburse legal expenses of owners of wedding venues who fought and won against a determination of the Department of Revenue that they owed sales tax on fees for using their facilities.

The override passed 152-2 in the House but failed 15-13 in the Senate, where Democrats joined with the conservative caucus in voting to override.

The other successful override votes in the House were on:

When the bills reached the Senate, the chamber became mired in the procedural muck, with the conservative caucus and Senate leadership fighting over who can ask for an override vote to take place.

It started in the morning, when Sen. Mike Moon, R-Ash Grove, asked Senate Appropriations Committee Chairman Dan Hegeman, R-Cosby, if Senate rules meant only Hegeman could offer a motion to override the governor on budget bills.

Hegeman, who serves as senate appropriations chairman, said he wasn’t aware of any rule but “we do have traditions in the senate that the handler or sponsor of the bill are the ones who bring up and discuss bills.”

Moon was not impressed, hoping to override Parson’s veto of the $150,000 for owners of wedding venues but fearing Hegeman would not make the motion calling for a vote.

“To heck with tradition,” Moon said. “Let’s throw tradition out the window, because tradition should not be standing in the way of making members of our community whole.”

When Moon rose later in the day to call for a vote, Lt. Gov. Mike Kehoe, who presides over the Senate, refused to recognize him for his motion, saying it was outside the chamber’s rules.

The Senate Conservative Caucus, which has quarreled with the chamber’s leadership for years, quickly jumped to Moon’s defense.

“It is unprecedented that the lieutenant governor would exceed his authority and refuse to recognize you like this,” said Sen. Bill Eigel, R-Weldon Spring.

“He should know better,” Eigel continued, “because he’s the former floor leader of this chamber,” referencing the position Kehoe held in the Senate before he was appointed lieutenant governor in 2018.

Sen. Denny Hoskins, R-Warrensburg, agreed, saying “there is no rule against what (Sen. Moon) is trying to do.”

Senate President Pro Tem Dave Schaz, R-Sullivan, was tasked with settling the dispute, ultimately deciding that Kehoe was correct not to recognize Moon. The power of a bill sponsor to maintain control of a bill is essential to the chamber’s decorum, he said.

“What we have seen and experienced here is not outside the practices and procedures of this body,” he said.

Moon, screaming, said he was “fed up” with the governor arguing Missouri can’t afford $150,000 when there are hundreds of millions in the state’s coffers.

He later apologized to the Senate for yelling, saying “it just came over me.”

“Is the Missouri Senate a wholly owned subsidiary of the governor’s office?” Onder asked.

Moon even insinuated that some lawmakers may be hesitant to anger the governor with an override because they hope to win a plum appointment some day.

The showdown lasted until shortly after 6 p.m., when Hegeman agreed to offer the override motion that ultimately failed.

As he did so, however, he said that “never before in the history of this state has a member been disrespected the way I have here today.” He urged senators to vote against overriding the governor.

“In an effort to try to appease children, we have decided that you’re going to make this motion,” Rowden, who is considering a run for Congress, said of Hegeman’s motion.

Members should respect the traditions of the Senate, Rowden told Moon.

“If you cared enough to run and get elected to this chamber, you should respect the rules,” he said. “If you don’t, then leave.”