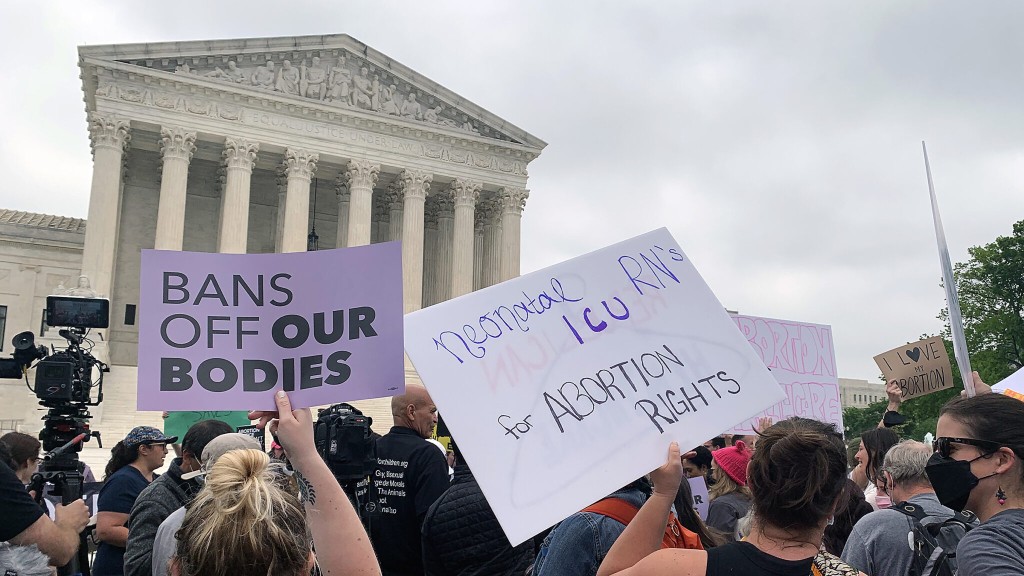 Supporters of reproductive rights gather outside the U.S. Supreme Court on May 3, 2022, in protest of a leaked draft ruling that shows the court plans to overturn Roe v. Wade. // Photo by Jane Norman/States Newsroom

But anti-abortion advocates worry the ban would be swiftly met with lawsuits. They hope the leaked U.S. Supreme Court opinion overturning Roe will jumpstart efforts to place a proposal on the statewide ballot declaring the right to an abortion doesn’t exist in Missouri’s constitution.

“I think we should make it clear, and I think let the voters decide whether they want to make it clear,” said Sen. Bob Onder, R-Lake St. Louis, “that there is no right to abortion in the Missouri Constitution.”

Proposed constitutional amendments have been introduced this session, but they’ve gotten little attention and face long odds of success with the legislature set to adjourn in less than two weeks.

If the U.S. Supreme Court were to overturn Roe v. Wade, in whole or in part, then the attorney general, governor or General Assembly could take the step to enact the ban on abortions by issuing an opinion, proclamation or concurrent resolution, respectively.

Passed in 2019, House Bill 126 contained what is often referred to as a “trigger ban” that would bar abortions in Missouri except in the cases of a medical emergency. It includes no exceptions for rape or incest.

Healthcare providers who violate the provision would be guilty of a class B felony, which can result in five to 15 years in prison, and have their medical license suspended or revoked.

Some of the law’s provisions, including a ban on abortion at eight weeks, are currently blocked while the Eighth U.S. Circuit Court of Appeals weighs a challenge to those statutes.

The trigger ban is not among the blocked provisions.

Attorney General Eric Schmitt said in a statement Tuesday that he’s encouraged by the draft opinion and would move to enforce the trigger ban.

“If we’re successful and Roe v. Wade is overturned,” Schmitt said, “I’m prepared to immediately issue the opinion that would protect the unborn in Missouri.”

If Missouri’s ban on nearly all abortions were to go into effect, Sam Lee, a lobbyist for Campaign Life Missouri, said he expects there would likely be a court challenge asserting a right to abortion in Missouri’s constitution or challenging whether the U.S. Supreme Court decision truly overruled Roe v. Wade “​​restoring or granting to the state of Missouri the authority to regulate abortion” as the trigger ban stipulates.

“And that would be a whole separate battle from what the U.S. Supreme Court might do with the Mississippi case,” Lee said. “So I think even more than ever, we’d like to see that passed and on the ballot this year.”

Two constitutional amendments proposed this session would give voters the option to amend Missouri’s constitution to make clear that nothing in it shall be interpreted “to secure or protect a right to abortion, or to require the funding of abortion by taxpayers or by any other means.”

Both the House and Senate versions have yet to be debated and voted out of their respective chambers. With less than two weeks left in the legislative session, there’s little time for a proposed constitutional amendment to make its way through the legislature.

Onder, one of the bill sponsors, said it should be a priority in the session’s final days with a court challenge likely inevitable.

“It’s something we should push through,” Onder said, “and if not, I think the governor ought to call us into special session to do it.”

A spokeswoman for the governor did not immediately respond to a request for comment Tuesday.

Lee said if the Missouri Supreme Court were to find a right to abortion in Missouri’s constitution, it could jeopordize a wide range of state statutes restricting access to the procedure.

“It just takes four votes over there for the Missouri Supreme Court to find a right to abortion,” Lee said. “And then we’re back to square one. And depending on how it reads, all of our laws could be at risk — our parental consent law, our restrictions on funding for abortion.”

Meanwhile, former Democratic U.S. Sen. Claire McCaskill, warned forms of birth control would be illegal if Roe v. Wade were to be overturned, pointing to the fact that Missouri law stipulates that life begins at conception.

Rep. Adam Schnelting, R-St. Charles, was the amendment sponsor of the trigger ban when it was approved in the 2019 bill. Schnelting said he was hopeful but hesitant to celebrate since the Supreme Court decision was simply a draft ruling that had been leaked.

“I hope the court rules in our favor. And I hope that it means that Roe’s overturned,” Schnelting said. “You’re talking about human life.”

The draft opinion, a major break from the closely guarded deliberative process of the nation’s highest court, is still subject to change before the U.S. Supreme Court issues a final ruling expected this summer. For now, abortions are still permitted in Missouri under current state laws.

Yamelsie Rodríguez, president and CEO of Planned Parenthood of the St. Louis Region and Southwest Missouri, said the draft opinion “previews what we’ve long been preparing for.”

“We knew this opinion was coming and while it’s not official, it brings us one step closer to an impending public health crisis,” Rodríguez said.

In Missouri only one remaining clinic, a Planned Parenthood affiliate in St. Louis, provides abortions and most residents travel out-of-state to access the procedure. In 2020, nearly 9,800 Missourians traveled to neighboring Kansas and Illinois to receive abortions — compared to only 167 procedures that occurred within Missouri that year.

Emily Wales, the interim president and CEO of Planned Parenthood Great Plains, which operates clinics in Missouri, Kansas, Arkansas and Oklahoma, said “the dominoes are falling” in terms of access to abortion.

In Kansas, voters will be asked this August whether to amend the state’s constitution to reverse a Kansas Supreme Court decision that found women had a constitutional right to abortion in the state. While the vote will not ban abortions, observers expect restrictions would soon follow if the right to an abortion is overturned.

Missouri, Arkansas and Oklahoma are among 13 states that have trigger laws in place if Roe v. Wade is overturned, and Wales said “it would mean an immediate loss of their constitutional protections.”

While Planned Parenthood is no stranger to adapting to new restrictions and frequently challenges them themselves, “the difference is that now rather than going to court and feeling confident that a court will intervene and overturn an unconstitutional law, we know that the courts are not the backstop,” Wales said.

Rodríguez urged patients to continue to access abortions while it is still legal.

“No matter what, with our partners, we will fight for what little is left of abortion access in Missouri and push forward to expand in Illinois where abortion access is protected beyond Roe,” Rodríguez said.