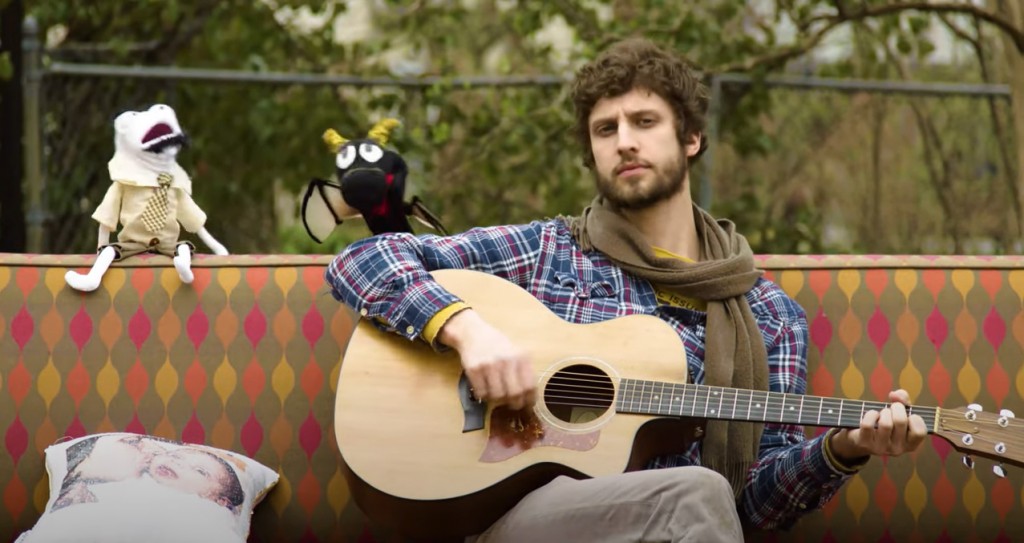 As the weather turns from gorgeous springtime to a burning summer hellscape in a flurry of gusting winds, perhaps it’s time to once again hunker down in front of your computer or behind your phone and watch a bunch of music videos. There’s a glorious selection of charming acoustic guitars, smooth hip-hop and R&B, and just enough dischordant and angry music to keep things interesting in our latest video roundup.

Nate Allen has been playing this song live for years now, and the ode to his beat-up acoustic is positively uplifting. It’s also a bit more rocking than most of the musician’s recent material, making for a nice switch-up in terms of tone. The video features a slew of familiar faces for those in the punk scene. Sharp-eyed viewers can spot folks from Company Retreat, Flatfoot 56, and more, along with one of Allen’s children, rocking out in the most adorable way possible. The song was mixed by Marc Urselli, after Allen won an online contest to have his song worked on by the Grammy-winner, and it sounds flipping amazing.

Dom Chronicles, “Hold It Down”

With its call-and-response between Dom’s litany of accomplishments and “you know I had to hold it down,” the rapper’s new cut reminds me of nothing so much as a really laid-back version of the Alkaholiks’ “Aw Shit.” That flute loop, too, is chill as hell. It helps that Quincy Lee’s video looks like it was shot entirely during the golden hour, giving all three and a half minutes or so this beautifully-lit sheen.

David George and everyone, “When We All Come Together”

Benefit songs or songs written to commemorate a tragic event can easily come across as mawkish or maudlin. Look to “We Are the World,” Bruce Springsteen’s “The Rising,” or the recent Jim James, Will Oldham, et al creation “Lift Up Louisville,” and you can hear songs with great intent, but cringeworthy execution.

Thus, the David George-penned “When We All Come Together” is a wonderful surprise. Featuring over 100 musicians, it’s nothing short of an amazing technical achievement, but thanks to the Brian Lynn orchestral arrangements and a guest verse from rapper Kadesh Flow, the end result is uplifting in tone and legitimately catchy in execution. Think of it being like Illinois-era Sufjan Stevens, but taken to the nth degree.

Listing all the musicians involved would take longer than the entire podcast, so check it out on YouTube for all the talent, and when you’re done, consider donating to the Midwest Music Foundation, for whom the song and video were created, in order to help the KC music community.

Recorded back in January, this excerpt from the long-running hardcore band’s set is pretty much non-stop action. As frontman Boj says about seven minutes in, “Fasten your fucking seatbelt, because it’s coming.” Despite the tiny confines of Wichita bar Kirby’s Beer Store, they manage to get three different camera angles, which is insanely impressive, and really manages to capture the band’s intensity.

“‘Alligators and Crocodiles’ is ONE of the songs of power. This is a song that a rabbit would sing to keep from being eaten in the dark. It is a camouflage. A song of deception. The song also summons the formidable self. it evokes the voice of a powerful opponent in which a frightened rabbit becomes the scariest thing in the darkness with this song.” I mean, FTRK is always a bit weird and mysterious, but those words and this video definitely drive the point home, if you’ve not yet experienced them. The band’s adding their entire back catalog to YouTube, along with some quarantine videos, as well, so keep an eye on their channel for regular updates.

Ethan Milner’s video for this SHAH track looks fantastic. The switch-ups from the plotline video to SHAH’s performances — and the changes within those performances shots — make this the most visually impressive video we’ve featured in this roundup for ages. The song’s a vocodered take on classic R&B slow jams, too, which is 100% up our alley. No lie: this song’s been getting a lot of replays as we typed up this column. It’s too smooth to turn down.

You want to charm the shit out of us? Open a freestanding door in the middle of your backyard and walk through, carrying a chicken. Add in puppet backup singers and a song that just lopes along beautifully, and we’re hooked. This is the second single off Hutchison’s Wide Wild Acres on Center Cut Records, and you should really do yourself a favor and get it. It’s available on Bandcamp.