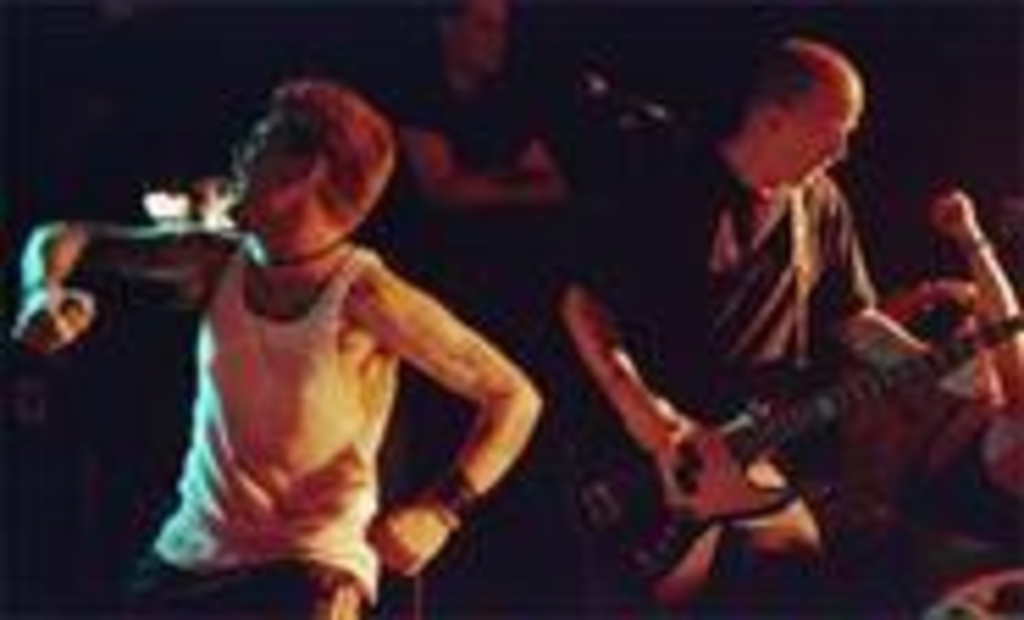 This just in … punk’s not dead, it’s just really tuckered out from its brush with greatness. The not-so-few faithful came to bear witness to the resurrection of the once great and trendy art form Thursday night at The Bottleneck, where, unbeknownst to the vast majority of the populace, the California-based boutique label Fat Wreck Chords came with a caravan of entertaining bands. Throngs of underaged SK8 rats dropped their adolescent hijinks to check out some of the strongest soldiers in the battle to keep the eternal punk-rock flame aglow.

The Ataris kicked off the early-curfew-friendly late-afternoon/early-evening show with a festive blend of poppy punk scientifically designed to keep the snarling throng a-smilin’ as it pogoed away its cares. All-too-brief songs such as “Broken Promise Ring,” “My So-Called Life,” and “San Dimas High School Football Rules!” got the crowd worked into a frenzy.

Next up, the formerly known-as-a-ska-band Mad Caddies put away the softer side of their repertoire and came out swinging with “The Gentlemen,” a horn-accented punk number in the vein of the Mighty Mighty Bosstones. The group now uses horns to emphasize points, whereas it once relied on them to drive the melodies. This evolutionary climb has been quite severe. A few years ago on the Warped Tour’s second stage, the Mad Caddies came off as a slightly better than average ska outfit with a couple of memorable songs. Tonight, they resembled road-toughened, battle-tested punk rawk warriors. Unfortunately, the Caddies didn’t include their finest song, “Distress,” on their set list, but it was still impressive to see how far they’ve come.

The two bands most people came to see, No Use For A Name and Good Riddance, were up next, and the barely postpubescent population pushed together in front of the cramped Bottleneck stage, ready for some heavy sweatin’ action. Despite the contagious energy of the crowd, No Use seemed a bit too laid back, as if its members felt as if they had no reason to sing or play all their lines or licks during many of their most popular numbers. It was unclear if this was due to fatigue (singer/guitarist Tony Sly, perhaps overwhelmed by the stifling heat inside the venue, seemed a bit under the weather) or to a desire to increase crowd intervention (fans happily filled in the blanks with their shouts). Whatever the case, the group seemed content to compensate for the skipped lyrics by adding some rather wankish guitar noodling that could only pass for soloing at a punk show. No Use For A Name came across as a clawless version of Bad Religion, eschewing that veteran outfit’s politics (unless you count a denouncement of KoRn and Slipknot as political) but maintaining its knack for pop melodies and cheery harmonies. NUFAN, joined by Mad Caddies’ trumpet player Keith, turned in a strong rendition of the Misfits’ “I Turned into a Martian.” However, all covers were not equally covered. The band’s set-ending butchering of Bob Marley’s “Redemption Song” was painful and self-indulgent, as if the group had No Use for an audience.

By this time, the sweat-drenched crowd had started gazing nervously at the clock, as the young American witching hour, 10 p.m., was growing ever closer. Fresh-faced fans began to reluctantly exit the sweatbox, which was unfortunate as their school-night curfews cost them a chance to see a blistering set by Good Riddance. Playing a set list full of old-school political punk that was reminiscent of Rollins-led Black Flag, Good Riddance drew from each of its four full-length albums while also unveiling two great new selections from an upcoming EP. The group’s angry, fast songs provided an engaging and rewarding listen for those who were able to stick around to see it. The hyperkenetic set was forced to conclude at precisely 10:15, for a lower-velocity nightcap had been booked for the older drinking folks, and the Fat Wreck Chords bands and their fans had to clear the premises rather quickly. But by that time, most had already sped home in hopes of avoiding a grounding.