This just in: John Rzeznik is still hot, and so is the weather. 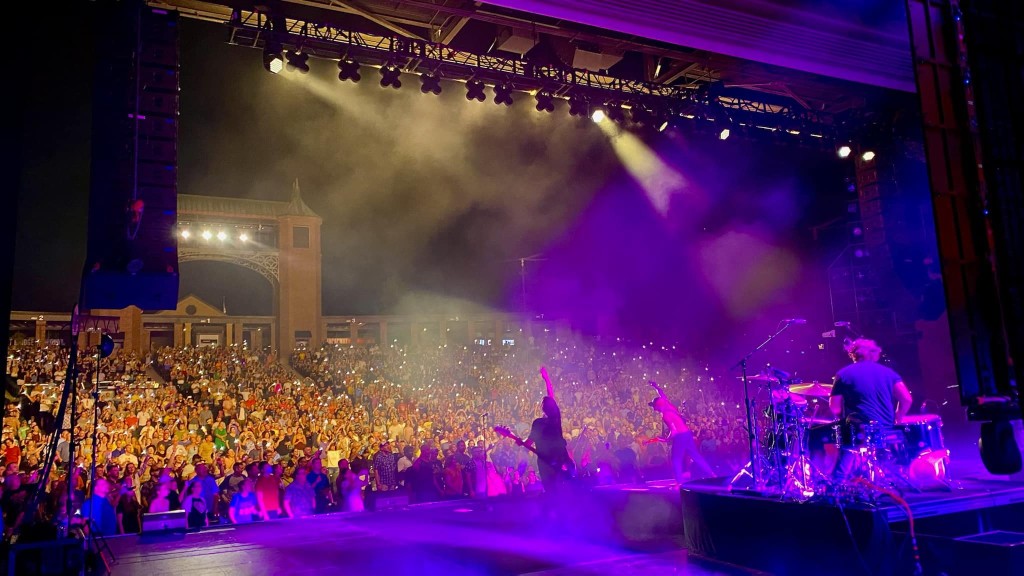 I have not kept up with Goo Goo Dolls since I first listened to them religiously in middle school, but I am almost offended at how easily I’m able to find a parking spot at their August 1 concert at Starlight.

Blue October opens the show at 7pm. For an alternative rock band, their energy is surprisingly mellow and upbeat. I know them best for their 2018 hit, “I Hope You’re Happy,” and—although I know this will make older readers groan—I was unaware that they were formed way back in 1995. Blue October valiantly sets the mood, but it’s hard to compete with The Goo Goo Dolls. From the moment that frontman and guitarist John Rzeznik steps on stage, the crowd is captivated. Due to their twice-rescheduled tour, many of the orchestra seats are empty. This doesn’t faze the band, who just seems happy to be back live.

My first thought as The Goo Goo Dolls take the stage is, Damn. Rzeznik is pretty jacked. I know that some of you will find this upsetting given that he is 56, although I doubt that anyone who knows me will be surprised, but the plain t-shirt, black pants, and baseball cap look really works for me. And that t-shirt is tight. All my friends agree that I have a thing for older men, but even so. I am taken aback. And, really, can you blame me? If you’re into rock stars and also being an ethical human being, you don’t have a lot of options. He has all the talent and charisma of Steven Tyler, but he’s not a disgusting pedophile.

Kansas City is once again under a heat advisory, and Rzeznik sums it up best when he says, “Holy shit, it’s hot as fuck, but it’s all right.”

It’s better than all right as the band launches into “Black Balloon.” The sun sets and balloons printed with the Boost Mobile logo bump all the way down to the pit.

“Okay, let me make sure I have the right guitar because I don’t wanna fuck this one up,” Rzeznik says.

It’s hard to tell if he’s just being a perfectionist or if he genuinely is having an off night. He asks the rest of the band to pause more than once because he’s plucked the wrong strings or isn’t quite ready. It brings me no pleasure to say this about a man, but Rzeznik’s mistakes do not turn me off. His sweaty t-shirt does not turn me off. His platitudes about how music brings us all together do momentarily turn me off (Like, hello? Do we recall the precarious state of abortion rights?), but only briefly.

He is an exceptional singer and guitarist, he delivers in every sense of the word, and the crowd knows it. When he abruptly stops “Come to Me” because he has “fucked up,” he says, “Just remember everyone deserves a second chance” and then shouts “From the top!” to the roaring approval of the audience. Bassist Robby Takac also brings the heat with “Lucky Star” off the 1993 album Superstar Car Wash, on which he takes the lead. Takac literally grins through the entire set, making it possible to believe that this, like every other show, is the best night of his life.

“War,” a single off the Chaos in Bloom album to-be-released August 12, is a worthy addition to their discography and Takac’s repertoire. In fact, every one of their songs is a banger, with the notable exceptions of “Life’s a Message” and “Bringing on the Light,” which are performed back-to-back. I adore cheesy power ballads and simple melodies, but these two are meaningless, and I cannot excuse them. Even if the guitar riffs are, as usual, totally sick. “Broadway” salvages the rock concert’s denouement with a short harmonica solo from Rzeznik. “Iris,” which I have patiently waited for all night, is unfortunately not a tear-jerker as expected due to some keyboard experimentation that falls short. The final song is a cover of Tom Petty’s “Runnin’ Down a Dream.”

Now. I am a Tom Petty devotee. I am illogically protective of his legacy and, with a steadfastness that baffles my friends, I reject most reproductions of his work. I love Miley Cyrus’s current sound, but her cover of “Wildflowers” hurts my heart, and not in a good way. Don’t even get me started on John Mayer’s “Free Fallin’.” Several times a month, usually on my way to a rock concert, I listen to a playlist that I’ve named “I Can’t Believe Tom Petty is Dead.” I’m not usually a masochist, but I do pick at the scab of knowing that I’ll never see Petty perform live. Seeing The Goo Goo Dolls sing one of his best-loved songs is maybe the closest that I’ll ever get. Rock legend Rzeznik brings the perfect amount of folksiness to the stage for this tribute and the keyboardist more than makes up for the previous “Iris” twist by staying faithful to the original here. Every single band member brings their all to this cover that has the potential to make or break the show’s wrap-up.

Dripping sweat, The Goo Goo Dolls exit the stage to the rabid screams of their majority middle-aged fans. Rzeznik’s guitar pick disappears into the crowd as someone’s mother begs him to toss his sweat towel to her.

Rest assured, I do have some shame. I only searched for the guitar pick for 10 minutes.

Goo Goo Dolls setlist
Yeah, I Like You
Slide
Big Machine
Here Is Gone
Black Balloon
Naked
Miracle Pill
Over and Over
Lucky Star
Free of Me
Come to Me
Sympathy
Name
So Alive
War
Going Crazy
Life’s a Message
Bringing on the Light
Broadway
Better Days
Iris
Tattered Edge / You Should Be Happy
Runnin’ Down a Dream (Tom Petty cover)