A conversation with gonzo illustrator Ralph Steadman, whose new retrospective lives at the Kansas City Public Library all summer long 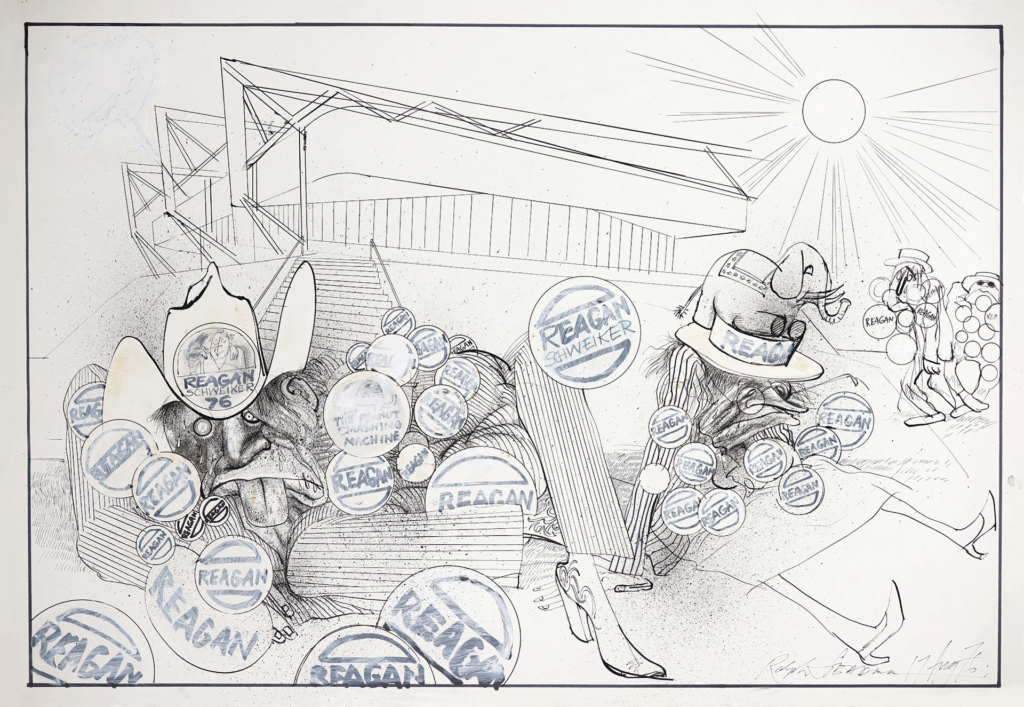 In the summer of 1970, the Welsh cartoonist Ralph Steadman and the Kentucky-raised journalist Hunter S. Thompson pioneered a new style of reporting with The Kentucky Derby Is Decadent and Depraved. Often cited as the first piece of gonzo journalism, it puts the unwelcome and often hilarious Thompson at the center of the story, with the Vietnam War reverberating around in the background. Steadman’s bold, nightmarish drawings leapt off the page, enhancing Thompson’s wild, stinging prose.

That piece was published in the mostly forgotten Scanlan’s Monthly, but the two later collaborated in Rolling Stone magazine for Fear and Loathing in Las Vegas, and despite Thompson’s 2005 suicide, Steadman remains bound, in the public’s imagination, to the famously incorrigible writer. But Steadman’s genius extends far beyond his work with Thompson. He’s added his irreverent gonzo visuals to Alice in Wonderland, The Devil’s Dictionary and Animal Farm; Vans Shoes has a series of sneakers decorated with his drawings; and the labels for Flying Dog beer sport his distinctive artwork. Steadman, who turned 83 last month, recently teamed up with the writer Ceri Levy for a book called Critical Critters where both argue passionately and humorously for animal conservation by depicting the amazing creatures who might leave our planet for good. And after a gap in his political cartoons, which used to grace The Times of London, he’s recently turned his gaze to politicians like England’s NIgel Farage and President Trump. It’s like what he used to do to Richard Nixon.

Surprisingly for a guy based in the U.K., Steadman has a few local ties. He and Watergate figure John Dean covered the 1976 Republican National Convention, held in Kansas City’s West Bottoms. Steadman also had an unforgettable encounter with Lawrence’s most famous writer, William S. Burroughs, in the early 1990s. From June 1 through September 8, the Kansas City Public Library will be devoting much of its first floor to a Steadman retrospective, featuring his depictions of Kemper Arena and other pieces he’s created since that era. I spoke with Steadman by Skype from England in May. His daughter, Sadie Williams, who manages the Ralph Steadman Art Collection, was also on the line.

Ralph Steadman: We were in Kentucky last week.

The Pitch: How was that different from 1970?

Steadman: The different thing was seeing the two little towers in Churchill Downs. They were the highest thing there 49 years ago. I noticed that they built up the stands for people to occupy. They were the crowning glory once.

Steadman: That’s when I first met Hunter. I was asked how I would like to go to Kentucky and meet an ex-Hell’s Angel who just shaved his head. I had a little goatee beard at the time. When we did meet, he said, “They said you were weird, but not that weird!” Back then, beards were not very prevalent. He said, “My God, you look like a matted-haired geek with string warts!” I never did find out what that meant.

The Pitch: We could Google it after we’re done.

Sadie Williams: [Ralph] got to go back as an honored guest as opposed to an interloper last time. He was literally the king of the Derby this year. It was like the court jester going back as the king, in a way.

The Pitch: For that Scanlan’s article, you used materials that normally aren’t used for artwork.

Steadman: When I went to stay with Don Goddard and his wife, Natalie, I’d left my inks and everything in the cab going to their place for supper before I went to the Derby. She worked for Revlon and said, “I’ve got these eye shadows and inks and red, lipsticky stuff.” So, I said, “Let’s have a look at it.” And that’s what I used to do the drawings.

Steadman: I now use  “dirty water” to wash the brushes out. It’s better if it smells a bit, too. I pour it onto a sheet of paper, on an absorbent flat bit of it, which is underneath it. And then I let it dry for three or four days, but when it dries, it has the most wonderful natural textures. The smell goes. Everything goes. It’s just incredible, and then you draw into that. That’s how I saw the creatures in the Critical Critters book. It’s a nice way to evolve, if you like, to think what I do now.

The Pitch: A lot of your work reminds me of a German artist I like named Käthe Kollwitz. She had a lot of the bold lines and the harsh textures I see in your work. She did a lot of anti-war work after World War I, but I guess the rest of the Germans forgot what happened the last time.

Steadman: I was bombed by those bastards [laughs]. I was in an Anderson shelter [in World War II] when I was a little kid. My mother used to knit to try and keep calm.

The Pitch: Do you think being a child of the Blitz might have affected your view of the world because people who’d never met you were hurting you?

Steadman: Yeah, that’s true. But also, we used to go out every morning after the bombing to find pieces of shrapnel. I wish I’d kept it. Exploded metal dried in the most extraordinary way. It wouldn’t have been much good if it had hit you. You’d look across the street and see one of the houses had been bombed. There was another house just up the road that I’d swear was a Banksy house because the parents had allowed the child to draw all over the walls inside.

The Pitch: You’ve done sort of a Banksy-like take on our own monuments in Kansas City. For the assignment you did for Rolling Stone in 1976, you drew Kemper Arena covered with abandoned Ronald Reagan signs.

Steadman: I was drawing about politics and horseracing and all those things. Some of the people [in the drawings], Republicans, were like cattle, and that’s how I felt about them.

The Pitch: That part of town was where the meatpacking was done.

Steadman: That’s how I started drawing the people. The people were the cattle. I drew George Wallace. He was a foul racist.

The Pitch: These drawings are only going to be seen on this stop of the tour.

Williams: It was my idea. To be honest, it’s nice to give people something that’s unique and they can relate to. I don’t know that everyone’s going to like them. I think that some people might find them a little bit insulting, but it’s only ink on paper. We’re not holding a gun to anyone’s head and saying, “You’ve got to like these.” It’s just a view of Kansas City at a very particular time by someone who’d never really been there before or seen anything like it. It’s an observation

Steadman:  All I had was a flan, and I wanted to put it in somebody’s face, and I couldn’t find the right person. Wittgenstein said that the only thing of value is the thing you cannot say, but if you can see it, it really means something. It’s that which makes drawing kind of interesting. It’s not like you’re making a conundrum. You’re explaining something. So, are you going to ridicule me? [laughs]

The Pitch: No. That would be hypocritical, because I’m wearing a Fear and Loathing in Las Vegas T-shirt you designed.

Steadman: By the way, something I noticed about the shirt. Look at it when you take it off. Unless, it’s been reversed, in the drawings I did [of Thompson], he was driving on the right-hand side of the car like we do in England. I never thought of that, and I did all those drawings, and I’ve only noticed it in the last few months.

It was marvelous that he could come up with such a phrase as “Buy the Ticket. Take the Ride.” His turn of phrase was so wonderful. I was always in awe of that. I couldn’t have done that better.

The Pitch: Or, “We were somewhere around Barstow on the edge of the desert…”

Steadman: “…When the drugs began to take hold.” People would offer him pills, and then he would eat it and say, “What was that?” That was a dangerous thing to do.

The Pitch: You were involved with another writer who loved chemical recreation and guns: William S. Burroughs.

Steadman: When I met William in Lawrence, Kansas, we did a [drawing experiment] where we took a picture of Hunter and put targets on his sheriff’s badge, his Rolex watch, and between the eyes. I said, “Those are the three places, if you can try to hit those.” Burroughs had this little pistol. It was a six-shooter. He was also shaking. Boom-boom-boom-boom-boom-boom. Just like that. None of them hit the targets. I went up to the print and said, “Sorry, William, but you’ve missed.” He said, “Well, he’s dead, isn’t he?” That was quite an interesting thing to do. I think he was on his last legs. I think that was 1990.

The Pitch: Gonzo journalism had a reputation for being engaged in destructive activities, but both you and Thompson were using it to try and change the world. With Critical Critters and other recent books, you’re trying to preserve it.

Steadman: Do you know what Hunter said when I started drawing wine labels? He said, “Stupid little grape stuff. That’s all you care about, stupid little grapes.” We’re trying to save what’s left. I do pick up things that people have thrown down. We are our own worst enemies. We can’t behave ourselves, and we’re destroying everything.

The Pitch: Why do you think you still draw?

Steadman: I don’t know what else to do. I don’t bother with football. I don’t golf or anything. I’m not interested in sport at all. There’s a saying — do you use it over there? — “Kicking the can down the road.” That’s what they did with Brexit. I’ve done this drawing, “The Can Kicking Award.” We may as well stay in Europe.

The Pitch: You’ve collaborated with people — John Dean, Thompson, Levy — who were there to collaborate with you in person. What was it like to work with Lewis Carroll, George Orwell, and Ambrose Bierce, who weren’t?

Steadman: With Animal Farm, I just loved the horse, Boxer. But I also realized the pigs are an animal that we should respect more than we do. We say to people, “You’re a filthy pig,” and it’s a real insult. But in fact, they’re quite quite intelligent and hygienic. Sadie’s heard this so often, but this is my father’s, and it mentions pigs, too:

One day in last September,

As far as I remember,

I was walking down the street with manly pride.

My heart was all a flutter

When I fell into the gutter

And I found a pig a lying by my side.

My heart was still a flutter

As I was a laying in the gutter

And a lady was heard to say.

You can tell a man who boozes

By the company he chooses

And the blooming pig got up and walked away.