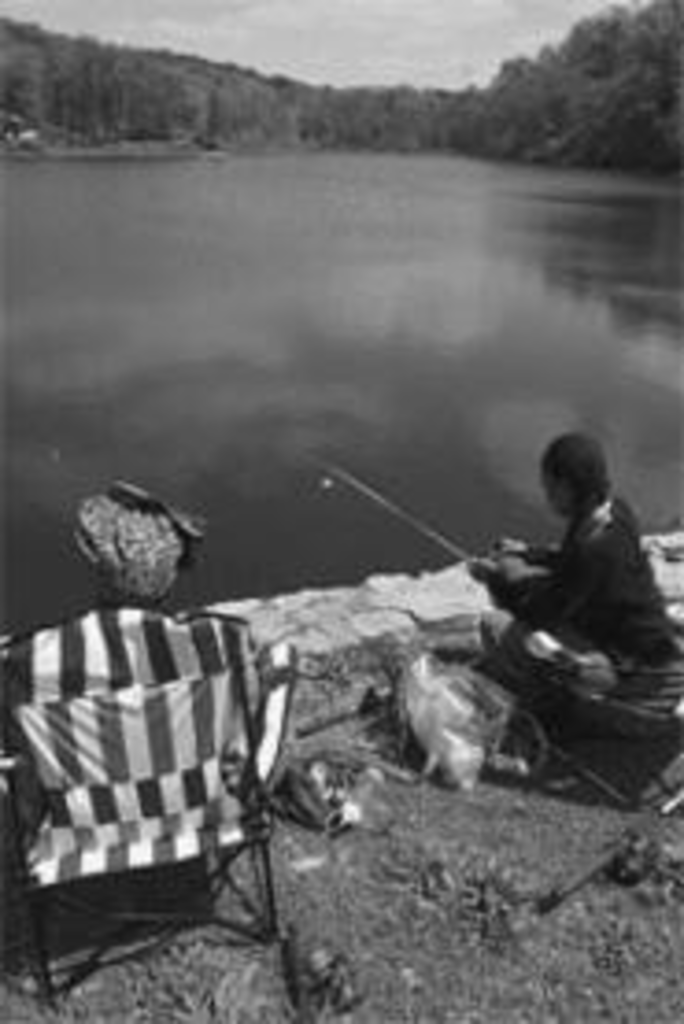 There are two kinds of fishing. First, there’s the fishing that most of us know and love. It involves vests, floppy hats and hours of languid, beer-soaked conversation before dinner bites, just as the sun goes down, and the good times move from the boat to the grill. What’s the other fishing? Real fishing. The thing people are out there doing this very minute.

People who fish are, by and large, single-minded creatures, devoted to their pursuit with a tunnel vision interrupted only by sunstroke and the cooler of beer. With rare exceptions, no fisher we’ve dragged out of a solitary reverie has considered introspection, sport-as-meditation or bonding with friends proper reason to fish.

At Swope Park’s Lake of the Woods — as the hot sun mercifully sets behind the trees and traffic — sits James, who is somewhere between old and really old. Perched on the edge of a battered beer cooler, arms on his knees, pole in one hand, James is always out here once the weather turns. He’s chain-smoking unfiltered cigarettes and staring out at the water, the hours he’s been here measured by the size of the pile of butts beside him. Why does he fish? Not bothering to look up, he keeps his eye on his reel and explains in a sleepy voice, “It’s good food, if you can catch a couple big ones. Caught plenty of dinners out here.”

Joe, whom we encounter on the docks of Lake Jacomo, is accompanied by an encyclopedic three-tiered tackle box. When we ask if he’s having a relaxing time, he tugs on his line and shakes his head no.

“You have to be tense,” Joe says. “It’s work out here. You have to look at your line, see where the water is different, know just when to reel in, when to let out line. You can’t sleep.”

Ed, wearing a faded baseball cap as he fishes from the bank of Lake Coot (at the James A. Reed Memorial Wildlife Area), goes back-and-forth among the three poles he’s set up on the water’s edge and the one he holds in his hand. He looks busy. He cocks an eyebrow. “Hell no. This isn’t relaxing at all. You come out here, you got your hopes up, and four hours later you don’t have anything to show for it. How’s that relaxing?”

Even when we’ve been fishing with friends — stuck in a boat together, a bunch of dorks in life jackets — banter quickly evaporates into shared silence. Fishers regularly wave off attempts at conversation, focused on their trembling bobbers. Joe explains it simply for me. “I’m out here to catch fish,” he said. “That’s all.”

Part of this reluctance toward introspection stems from the fact that most fishers grow up with poles in their hands. They fish with ease. The only thing they struggle to produce is an answer to when or why they started fishing.

The notion of taking up fishing seems about as logical to them as growing another arm. You either fish or you don’t — and if you don’t, you certainly don’t up and start as a hobby. Fishing is hard work, and making sense of the bait-shop walls, with their jigs and swivels and trot lines, is as challenging as actually learning what to do with those items once you’ve bought them. Ask fellow fishers for tips, and they’ll do one of three things: Get supertechnical, give you clichés (“Just be patient”) or laugh. Hard.

The two kinds of fishing collide only during those rare moments when someone actually catches something. The suddenness of a bite and the violence of hauling in a fish — slimy and pointy and flopping around — remind people what fishing is supposed to be. Strangers become chummy, beers are lifted and trash is talked. These moments quickly fade, though, as everyone casts out.

The oft-overlooked Blue Springs Lake offers big-lake fishing without big-lake distractions — such as wild boaters and other fishers stealing your mojo. The fishing is fair-to-good, with the odd school of sunfish and hybrid striped bass swimming by. Rent a boat to fully explore the 720 acres of placid waters, much of which is difficult (and exhausting) to reach on foot. Located in Fleming Park, at U.S. Highway 40 and Woods Chapel Road.

Elbowing local competition aside, Lake Jacomo (also in Fleming Park) contains 970 acres of water — filled to the brim with crappie, bass, walleye and catfish. Boat rentals range from tiny outboard motorboats to huge-ass pontoons with built-in stereos and plenty of room to lounge as you wait patiently for a bite. Though it offers quiet hollows and coves, Jacomo is plagued on weekends by partyers who cruise on these pleasure crafts, turning the ideal of gently floating on a sheet of water into a reality of instant seasickness. Located at Interstate 470 and Woods Chapel Road.

Lake of the Woods

This is not so much a lake as it is a huge pond purported to contain dead bodies and old cars. A concrete deck gives easy access to deeper-water fishing, and lots of narrow paths wind off into the thicket, providing plenty of the shade and vegetation where fish love to hang out. On Friday nights, it’s as close to a raucous party scene as you’ll find, with everyone hauling coolers full of beer and pumping music from cars parked right on the banks, which might deter those fishers seeking Zenlike recreation. Located at the intersection of Gregory and Oldham in Swope Park.

Just a little smaller than Lake Jacomo, Longview Lake eschews limits on personal freedom, permitting boaters to crank out whatever horsepower their boats can muster (meaning boat fishers are in for choppy waters). Those on foot are encouraged to search for access to quieter, hidden parts of Longview’s 930 acres. Be sure to visit Bob in the marina, who seems to have a preternatural knowledge of the best places to fish on any given day. Located at Interstate 470 and Raytown Road.

Because it’s a river, you can pretty much fish it anywhere you can find an opening — say, from Riverfront Park (Riverfront Road, just off Front Street) to the unfenced banks between the River Market and Interstate 35. Then again, because it’s the Missouri River, you may want to think twice about eating what you catch. Notorious for containing monster catfish and being hard to fish without a boat, the Mighty Mo is a cruel mistress. With banks so muddy your shoes might get sucked off your feet and with plenty of tangles and trash in the sometimes amazingly smelly water, the Missouri River provides pure, no-frills fishing — with potentially huge payoffs.

Fishing doesn’t have to be an adventure. It can be a diversion on par with getting coffee or taking a walk. Penn Valley Lake is the lake of choice for the time-pressed urban fishing enthusiast. Covering a tiny 3.08 acres, Penn Valley Lake does have fish, but it also has dozens of fishers, resulting in slim pickings. But with traffic whizzing by on all sides and people working hard in the high-rises visible from shore’s edge, fishing never feels more gloriously lazy than it does at Penn Valley Lake, located at 27th Street and Broadway.

These 11 lakes and two streams, totalling 250 acres of water, contain every variety of Missouri fish imaginable. Honker Lake is just for kids; farther out along the gravel roads are bigger, more formidable challenges: Coot, Gopher and Nell lakes. Some lakes and streams are accessible only by foot; renting a rowboat is the only way to actually get out on the water. Nonetheless, because it’s out of the way and something of a well-kept secret, James A. Reed is as close as you can get to unspoiled fishing without making an all-day journey of it. Open from 6 a.m. to 9 p.m.; located at Ranson Road and East U.S. Highway 50.

This is what Johnson County must have been like before suburbanites showed up and littered it with strip malls. Overflowing greenery and 120 acres of fish-filled water make this a truly idyllic fishing hole, with canoe and rowboat rentals available at the marina. For a quick shot at pastoral bliss in the heart of JoCo, it’s best to fish Shawnee Mission Lake in the evening, when the beach has cleared out. Along its sloping shores, docks and dam, the only reminders that you’re just blocks from chain stores and traffic are the light towers barely peeking over the treetops. Open from 5 a.m. to 11 p.m.; located at 79th Street and Renner Road in Lenexa.

Godzilla as a lake. Smithville Lake measures 1,700 acres, with 1,400 of that cleared for fishing, which means you can spend an entire day merely lapping it in your boat. It takes awhile to get to Smithville from Kansas City proper, but if you’re used to smaller, more urban fishing areas, this locale should prompt you to at least consider changing your tune. Just about every fishing scenario is possible here, from casting in the middle of murky deep water to floating through a dense tangle of pussy willows and submerged trees. Even if you don’t catch anything, you’ll be hard-pressed to forget this spot. Located one mile north of Smithville on U.S. Highway 169.

Squint and it’s hard to tell the difference between this lake — with its narrow roads and gravel pull-offs — and the Lake of the Ozarks. Don’t see it? You’re not squinting hard enough. There are lots of playgrounds to keep the kids occupied and shelters where you can set up a grill in anticipation of whatever you pull out of the water. The marina dock provides bench seating, which is worth the trip on its own. The designated all-night fishing events that are scheduled four times a season (the marina posts dates and times) are the best times to catch anything worth bragging about. Rental boats are a bit wimpy, but with 400 acres of spots, ranging from pondlike shallows to patches of deep water, you shouldn’t bore too quickly. Open from 6 a.m. to midnight; located at 91st Street and Leavenworth Road in Kansas City, Kansas.