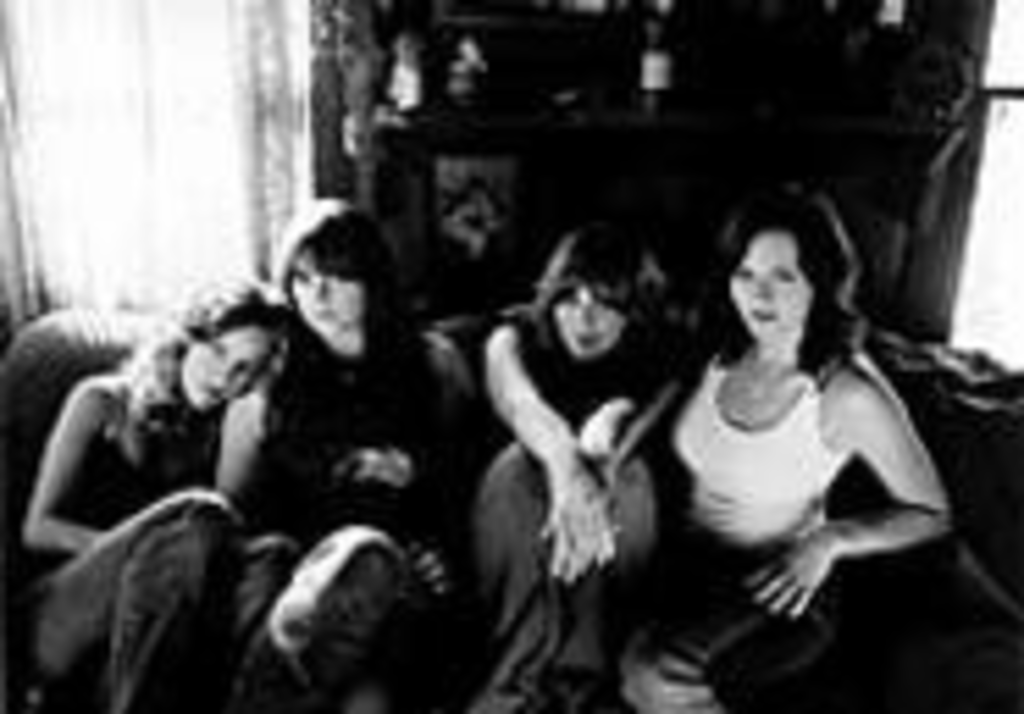 Back in January 2003, when the Donnas stormed MTV’s TRL with a performance of “Take It Off” — the lead single from its 2002 major-label debut, Spend the Night — the presence of real guitars and nonplastic women on the show disturbed the balance of the channel’s teen-pop-centered cosmos. Such gleeful disruption sums up the nature of the Donnas: four women from the Bay area who expertly bashed out chords more than a decade before Ashlee Simpson started layering black jelly bracelets on her wrists and calling herself punk.

The quartet’s latest platter, Gold Medal, arrived in October. Almost a year in the making, the album was delayed, first when drummer Torry Castellano developed tendinitis in her wrists, then when the group’s original sessions with producer Scott Litt fell through. “We didn’t really click artistically,” guitarist Allison Robertson says. “It wasn’t a bad, horrible thing. It just didn’t work.”

The band moved on to Butch Walker (Midtown, Avril Lavigne), with whom the women felt a more personal spark. “He knew all the musical references,” Robertson says. “I could, like, skip around — go from Kiss to Rick Springfield to Cheap Trick to the Beatles to Alice Cooper. And he knows everything. You don’t have to explain, ‘Oh it’s from this album, I don’t know if you know it.’ He’s like, ‘I know exactly what you mean.’ And then he starts singing exactly the part you’re talking about. It’s hard enough for me to find friends like that, but to find a producer that has that same mentality about music … ” she says.

“Plus he’s dorky, and I like that,” Robertson continues. “He’s cool, but dorky. That’s how I feel about all my friends. I would never be friends with somebody that’s only cool. To be someone I get along with, you have to be a dork in some way.” She laughs. “When it comes to music, he geeks out. He works fast. We work fast. He’s really direct. We’re really direct. We don’t like to play games. We just wanted to make an honest, working-class, fun and easy record. ”

Mission accomplished: Rather than the AC/DC-meets-Kiss strut of Spend the Night, Gold Medal most often conjures the old-fashioned, beer-swilling Midwest rock of Cheap Trick. Not necessarily sonically, though “Don’t Break Me Down” is excellent power rock driven by a slinky, smoky bass line, but in practice — the riffs burst with controlled melody instead of raw sleaze. “Fall Behind Me” tempers squealing chords with monster hooks, and “I Don’t Want to Know (If You Don’t Want Me)” features handclaps, cherry-kissed harmonies and new-wave bounciness. There’s even a hint of R.E.M.’s IRS-era output on the midtempo “Is That All You’ve Got for Me” and a loping western twang on “The Gold Medal.”

“It wasn’t like a conscious effort for it [the album] to not be as heavy or metal or whatever,” Robertson explains. “The last two years, I’ve been listening to a lot of stuff that, to me, is really inspiring music that was heavy before there was metal. You know, like Steppenwolf and the later Beatles albums. That late-’60s rock that’s just a little dark, but not necessarily … like, the drums hadn’t gotten to that metal stage. The lyrics hadn’t gone cheesy. That’s what I had been listening to right before we wrote for this album. I don’t know if that’s how it happened.”

It’s likely that Walker’s affinity for Cheap Trick influenced the Donnas’ newfound sheen, however subconsciously. But more than his record collection, his respect for the group’s intense independence and even fiercer smarts aided Medal‘s evolution.

“It’s always nice to have someone come in near the end [of the recording process] and go, ‘These words maybe could be better’ or ‘This one guitar part, maybe you should go back and think of something else’ without doing it for you but just kind of pushing you to maybe rethink something before you lay it down,” Robertson says.

“Being females, you can’t have someone write something for you, and you can’t have someone telling you what to do,” she continues. “People think that’s what happens anyway. For 11 years, it’s been the bane of our existence. Anytime you work with anybody, someone suspects that they’re doing all the work, if it’s a guy. We’re always trying to show people, ‘No, we write our own songs. We do this and that.’ The last thing we want to do is have someone tell us what to do.”

That stubborn attitude served the Donnas well when they started out as teenage punkettes who all went by the first name Donna (with different last initials, reverse-Ramones style). The group’s first few records on the notable indie label Lookout contained bratty punk nuggets that honored the intoxicating dangers of adolescent lust and the flouting of authority. The tunes had turned more metallic by the time of 1999’s Skintight and 2001’s The Donnas Turn 21, a shift that culminated in Spend the Night‘s arena bombast.

Medal, too, still finds the band in fine kiss-off form, though Robertson notes that the title track’s ire (What did you get from them you couldn’t get from me?/It’s where I got my start/But not where I left my heart) is directed more toward its Bay area hometown than toward a worthless boy.

“We have great fans, and we’re really appreciative,” Robertson says. “For the most part, we’re a really happy band. But where we come from, you’re not cool the bigger you are. I always read about other bands, especially from Orange County or something. You always hear stories about their big homecoming show, and everybody from their hometown loves them and can’t wait for them to come home. For us, it’s like the opposite.

“After a while, we just started to realize they’re never really going to understand us,” she continues. “We’re never going to please them. Since we were 13 and started playing, we so badly wanted to be part of a scene. Not necessarily be cool, but to have support from other bands and other people that we thought were cool. This album is about not caring anymore and just being happy enough that we like our band and the people that have liked our band for a long time still do. It’s just a celebration and appreciating all that stuff that has come our way that’s good.”