Going vegan by the glass at Voltaire, Merchants and Westside Local 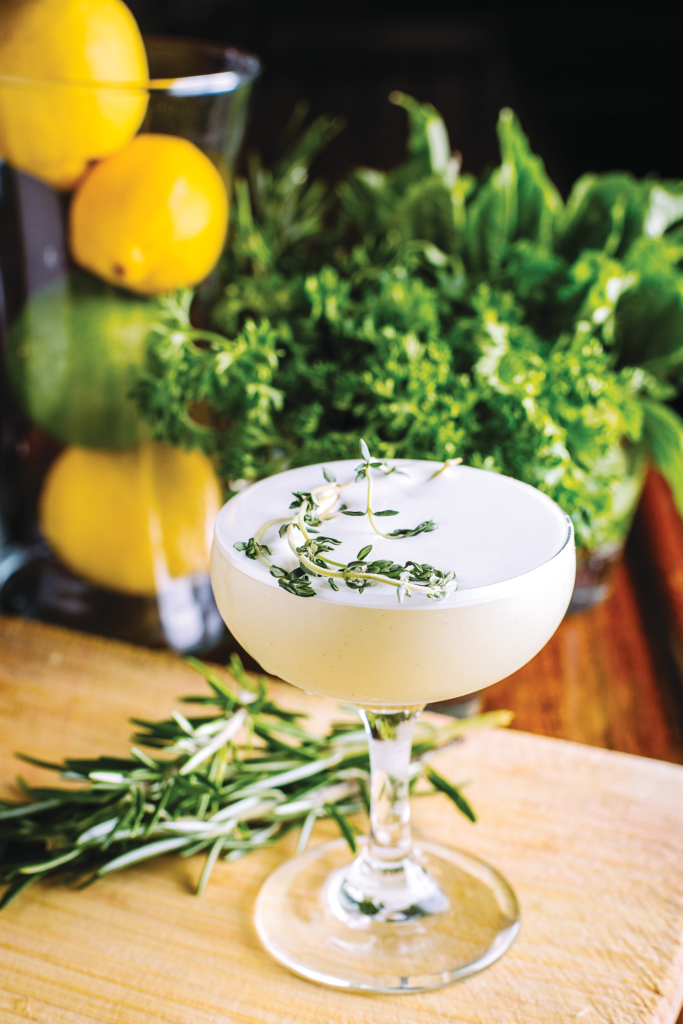 It’s easy to feel bad for vegans, a population born to punchline maybe half of all service-industry jokes. (The other half of behind-the-scenes quips about high-maintenance guests are of course reserved for gluten-free diners.) Disdain toward this group has cooled somewhat in recent years, but it seems unlikely ever to fade entirely from this bone-crunching barbecue town.

Even cocktails aren’t without complication for those who eschew animal products. There’s no need to ask for a meatless margarita, but that splash of Worcestershire sauce in a house Bloody Mary mix renders the brunch staple an anchovy-containing moral hazard. Meanwhile, White Russians, Brandy Alexanders and eggnog contain dairy, off-limits to vegans.

Still, the recent craft-cocktail surge has led bartenders to deeper experimentation, to the benefit of certain dietary exiles. Agave nectar can stand in for honey, almond or coconut milk can solve for that White Russian in a pinch, and aquafaba is having a star moment.

Leading this milkless frontier around here are three bartenders I visited with recently. 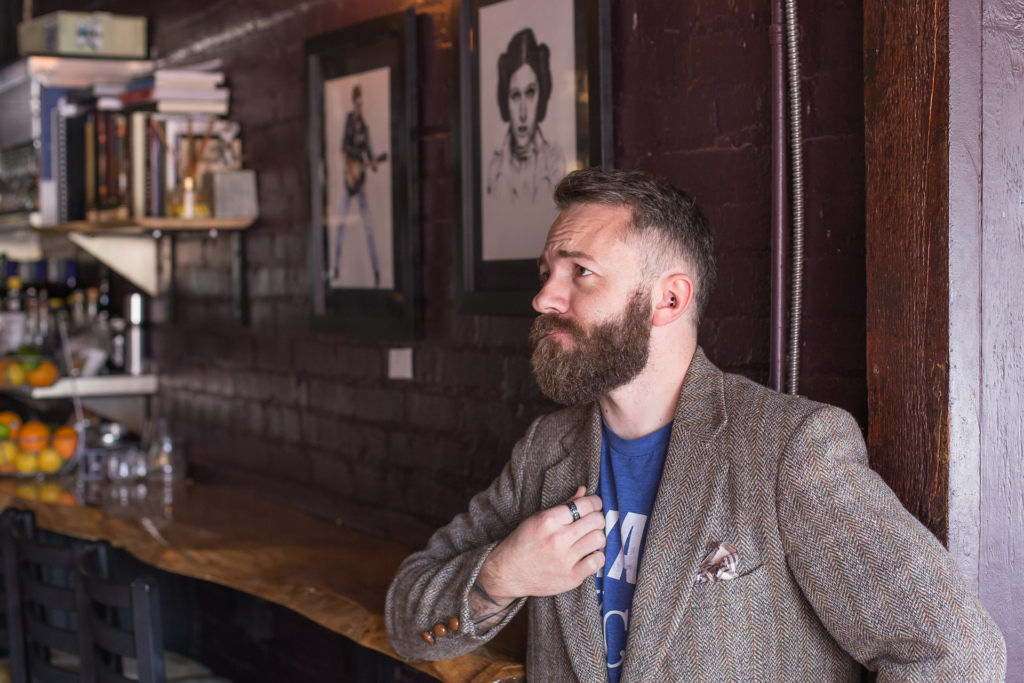 It’s not that the bar at Westside Local is hard to find — it’s that you might just miss it on your way from the dining room to the patio. There’s only a few feet of wood — enough room for perhaps four people to get very cozy with one another. The lack of space (and a proper dishwasher) is in part what led bar manager Zac Snyder to search for an alternative to egg whites. He found it in aquafaba.

“Aquafaba is garbanzo-bean brine,” he says. “It’s literally just the liquid inside of a garbanzo-bean can, but it does contain some protein and soluble plant solids, and it works exactly like an egg white, which can give a cocktail a light, foamy texture.” 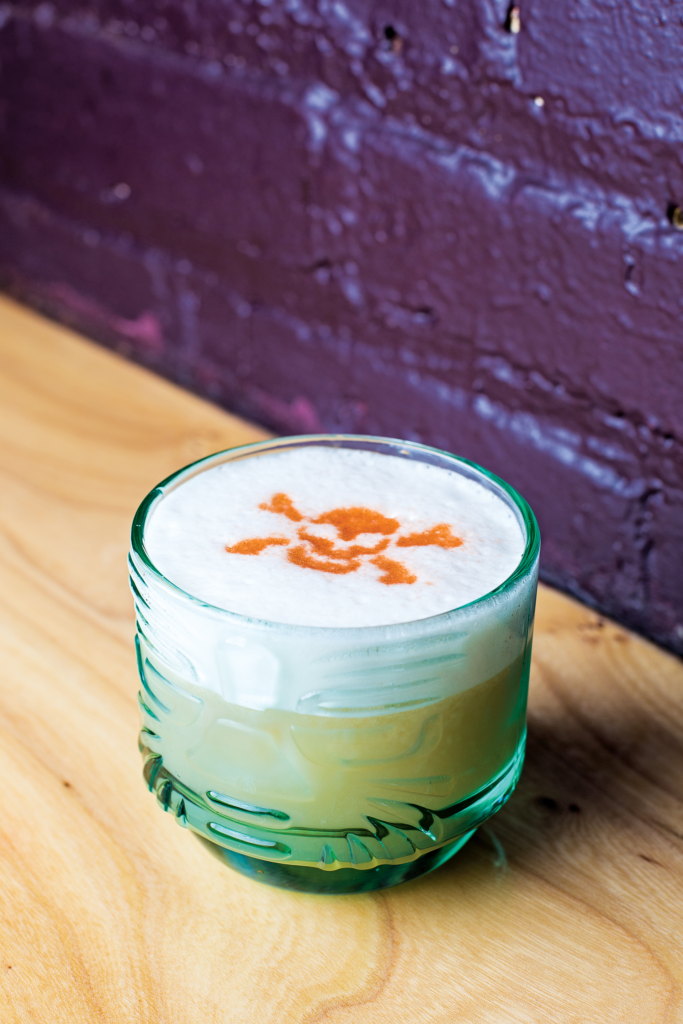 Aquafaba’s applicable properties were discovered in France in 2014, when it gained popularity as a substitute for egg whites in meringues; then it crossed the Atlantic and crept onto bar menus. Today, you can find it at Westside Local in Snyder’s version of the Port Light, a tiki classic. Though the 1960s recipe calls for whiskey, Snyder favors brandy to complement his passion fruit–tamarind syrup and fresh-squeezed lime juice.

“Making the drink is an involved process because it’s treated exactly like an egg-white cocktail,” he says. “We combine everything, wet shake it with ice and then dry shake without ice to fluff the cocktail and really build that foam.”

Snyder’s Port Light works like a tropical brandy sour, one with some curves. The passion fruit–tamarind syrup tiptoes between sweet and sour to play against the smooth, creamy aquafaba layer. It’s a glass of island life to sate landlocked folks — and, yes, vegans.

“The Local has always been very respective of dietary restrictions,” Snyder says, “and I try to maintain the idea of being sensitive to those needs at the bar. But honestly, finding creative solutions to cocktails for those diets makes for a great challenge.” 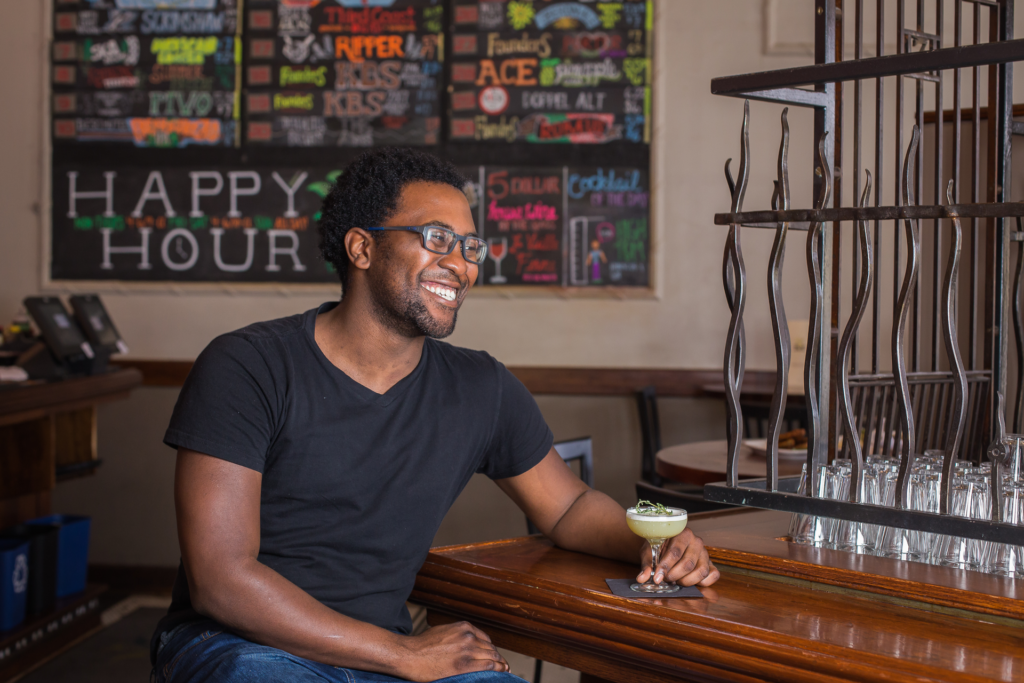 There’s only one designated vegan cocktail on the menu at Merchants Pub & Plate in Lawrence, but it’s the only one you’ll need. The Herbalist — made with tequila, herb oxymel and aquafaba foam — is the brainchild of bartender Maurice Cox, with an assist from chef Emily Peterson.

“Emily introduced aquafaba to me,” he says, “and she suggested a flip cocktail, which I thought gave us a great opportunity to show off another cool bar ingredient we’ve been working on, which is our herb oxymel.”

Oxymel — a mixture of vinegar and honey — is a traditional folk medicine with a few hundred years’ worth of history and a new life in craft cocktails. Thick and syrupy, it’s most similar to a shrub.

“The thing that makes an oxymel an oxymel is that it has a vinegar component, an herbal component and honey,” Cox says. “It’s more viscous and more textured. Oxymels can be floral and spicy or woody and earthy — it just depends on the herbs you use. In our herbal oxymel, we have sage, thyme, parsley, rosemary, some vegan clover honey and an apple cider vinegar.”

For the Herbalist, Cox dry shakes the aquafaba and the oxymel, then introduces tequila with ice, shakes again and strains the butter-yellow liquid into a coupe glass. There’s a lot of complexity in these 4 fluid ounces. Tequila is an unconventional spirit for a flip cocktail, but here it fuses a strong backbone to Cox’s herb-garden oxymel. You taste no compromise.

“It’s important that we’re able to create a really special experience for everyone — including people with dietary restrictions,” Cox says. “They can immerse themselves in the experience of a craft drink with everyone else and not have their dietary needs be an obstacle. I think we’re going to see a lot more of that mentality: It’s not about making exceptions for certain guests; it’s just thinking outside the box in terms of recipe development, which is part of the job.” 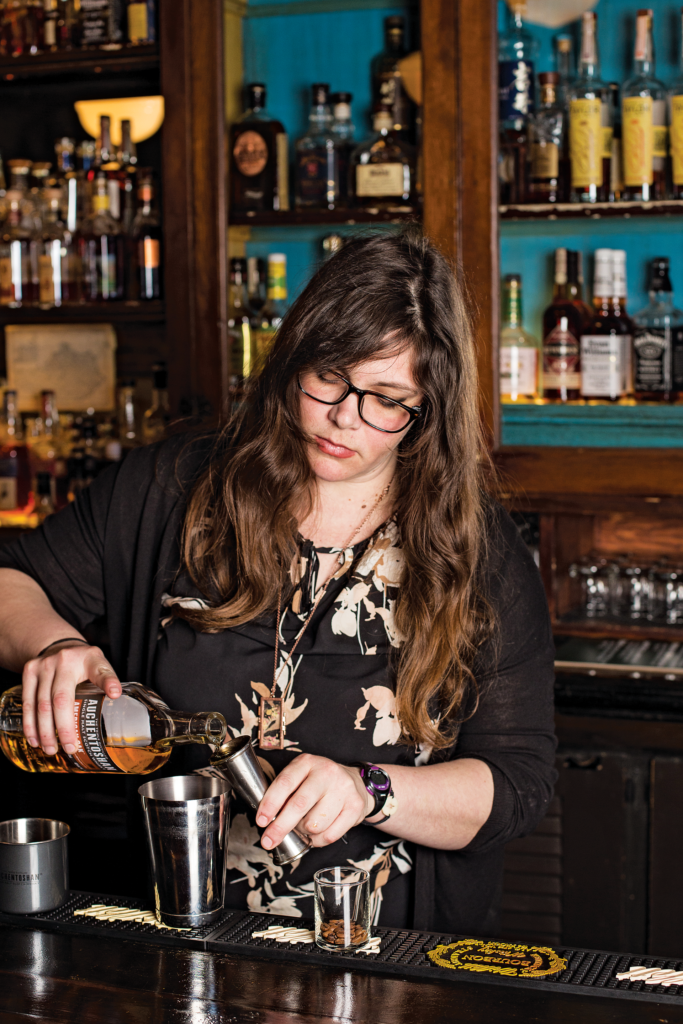 Voltaire’s Katy Wade didn’t set out to create a vegan cocktail. You might say the cocktail found her.

“I was in Thailand last summer, and every mom-and-pop eatery would serve you ice water in these tin mugs — like Moscow mule mugs,” she says. “I finally understood why people love Moscow mules so much, because they’re so cold and refreshing. And that inspired me to put something that reminded me of Thailand into those mugs when I got back.”

Aside from sharing the same copper mug, Wade’s Mai Thai Coffee has nothing in common with a Moscow mule. She combines Auchentoshan American Oaked Scotch, J. Rieger Caffe Amaro, house-made coffee syrup, spicy chili tincture and coconut milk for a liquid experience that might confound even the most experienced drinker, vegan or not. 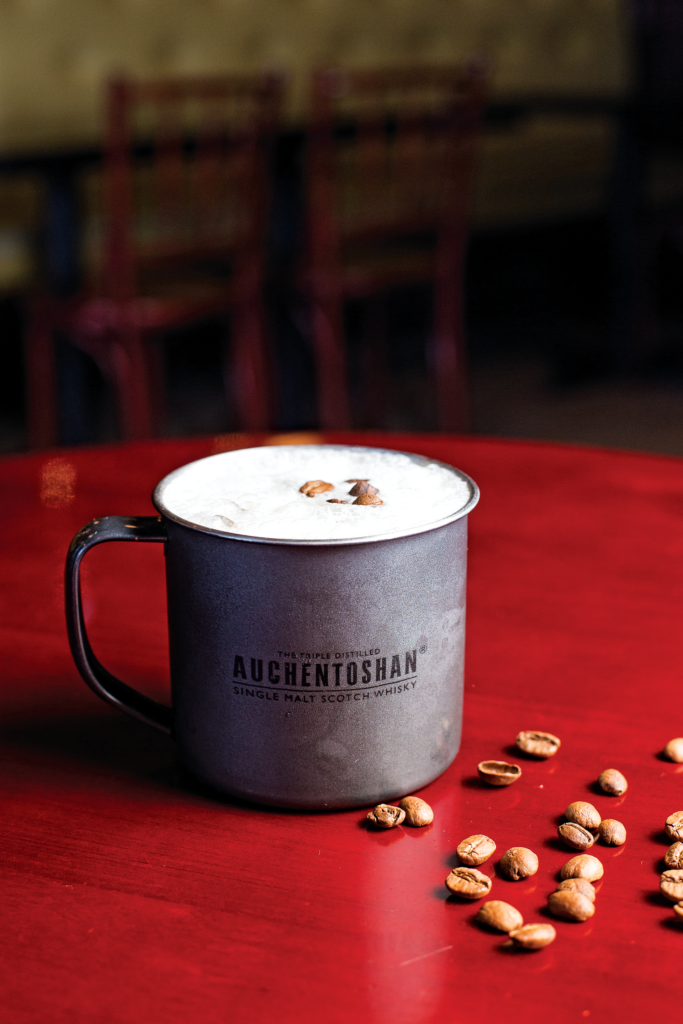 “Coconut milk is a great product, and a little underutilized in the bar realm,” Wade says. “It’s something our kitchen is always going to have around, and it stays on the shelf longer than cream.”

At Voltaire, the Mai Thai Coffee often pulls double duty. The vigorous shake that Wade gives it causes a frothy, frappé effect, so her vegan cocktail can also serve as a gluten-free, dairy-free dessert.

“I think vegan cocktails are picking up because bartenders view them as kind of a cool challenge, and we all like challenges — it’s a cool thing to be able to master,” Wade says. “But more important, I think it’s nice that more people are being conscious of various dietary needs. The last thing we want to do is isolate someone.”