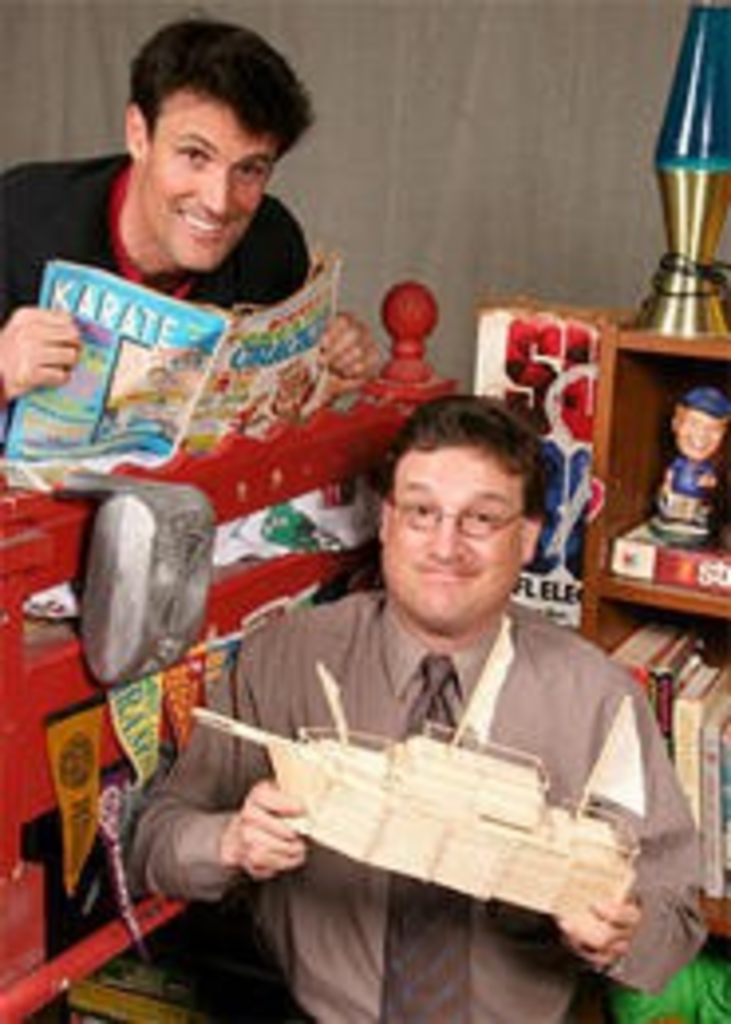 For a while, I’ve had a theory that the American Heartland Theatre’s special brand of unchallenging uplift was right in line with what’s happened to contemporary country music, our culture’s fount of feel-good, tear-jerker, audience-flattering corn pone designed to make focus groups clap hands and shit flags. At the Heartland, as on KFKF 94.1, everything’s all right in America — except maybe in the hearts of the wealthy or book-learned “elites” whom audiences have been primed to fear: characters such as the magazine columnist who must reconnect to hometown “values” to learn what life’s about. Or, in a current hit, that “high-maintenance woman” who won’t fuck Toby Keith.

Everything’s all right in the Heartland’s Bunk Bed Brothers. The show concerns two adult brothers — one a joking ne’er-do-well, the other a polo-shirted columnist for Esquire — forced to spend a night in their old bedroom. They bicker and bond and wrassle around with tighty-whities on their heads. (That underwear’s supposed to be old, but for some reason, it’s adult-sized.) In one memorable scene, they act out a long routine to a sound-effects record; in another, they smash the fourth wall by ordering a real pizza from a real Domino’s driver, who totes the pie right onto the set. Both John Mueller and Craig Benton are funny as the brothers, with Mueller spinning his lines with an offhand realism and Benton mining gold from his exasperated Everyman routine. The show is funny, uplifting and deeply inconsequential. The magazine writer learns to loosen up a little, and the ne’er-do-well finds the will to get his life together.

Then, no joke, the top bunk becomes a rocket, launching one brother into space.

Other than that, the evening of meaningful glances and not-gay horseplay could easily be distilled into a three-minute Tim McGraw ballad. Most Heartland patrons look too Crown Center urbane to be country fans, and most country fans I know give me the stink-eye when they find out that I write about theater. But the similarities keep striking me: Both art forms are white, reassuring and steeped in yearning for a “simpler” time. Both labor doggedly to reflect and idealize the world their audiences already believe in. Chillingly, both present that idealized world as not only real but also universal — a bad habit of our culture that often leaves smart people reflexively assuming that what’s good for Alabama is good for Afghanistan.

I got so worked up over this that I devoted an hour listening to last week’s Top Ten Country Singles. What I discovered:

2. Just as the title Bunk Bed Brothers does not guarantee the hot man-on-man action you might expect, songs named “Settlin'” and “Wasted” avoid such traditional country themes as bad marriages and drinking too much.

3. Only two songs, “Lucky Man” and “Find Out Who Your Friends Are,” deal explicitly with how super everything is. Three others (“Stand,” “Wasted” and “Settlin'”) concern how super the singer (and, by extension, the audience) is in a world vaguely less super than it should be.

4. Moral relativism! Emerson Drive dares to suggest in “Moments” that homeless people aren’t necessarily lazy bastards. Ballsier still is a reference to “the war,” weighted with ambivalence instead of with timpani and fireworks.

5. As fun as Bunk Bed Brothers is, country radio offers a richer, more varied experience. Sure, most of these artists aren’t fit to lay flowers at Waylon Jennings’ grave, but they have more in mind than quick laughs and smoothing out our world for us. If Nashville can push its audience, surely Hallmark can.