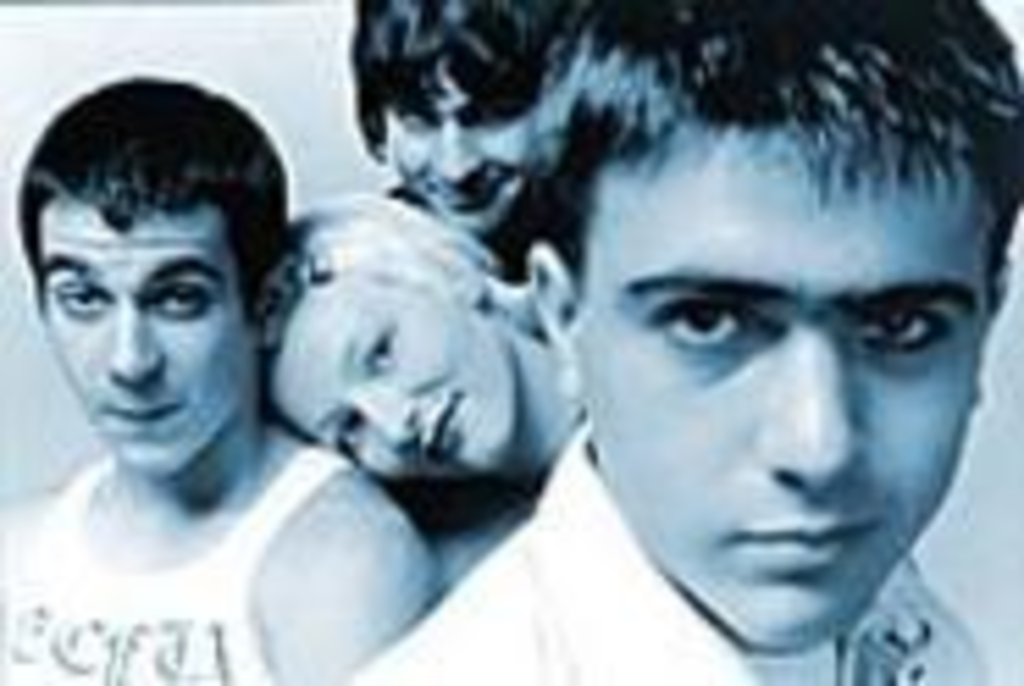 The last time the Gadjits shared a bill with the Breakups was in 1995, when both played at the VFW Hall on Walnut. Gee Coffee was still in Lenexa, the Daily Grind had yet to rise and fall, and El Torreon still served as a storage space. The Gadjits, on the strength of an irresistible self-titled demo full of perky ska/punk tunes, had already established a burgeoning fanbase of Operation Ivy-loving high-schoolers, while the Breakups, boasting a streetwise sound while maintaining a sense of melodicism, appealed to a rougher crowd. In the years following this fateful show, the members of the Breakups lived up to the band’s name by parting ways, while the Gadjits ended up on the Epitaph spinoff label Hellcat, played the Warped Tour, and weathered patronizing “punk version of Hanson” stories that focused more on the youth and familial relationship of brothers Brandon (singer), Zach (bass), and Adam Phillips (percussion) than on the band’s impressive music.

Five years later, the original members of the Breakups reunited for a New Year’s Eve gig at El Torreon, and the Gadjits, having negotiated an amicable divorce from Hellcat and sporting a new rock-and-soul sound, also helped the city’s only all-ages venue usher in 2001. Back in the old-school days (and in a scene dominated by youth, being together four or five years ago qualifies as “old-school”), the two bands were reportedly engaged in a feud, but all has evidently been forgotten and forgiven, as the Breakups are now practicing in the living room of the Gadjits’ south Kansas City home. “That was a very long time ago,” Adam says of the rumored spat. “You’ve gotta grow up,” Zach adds. “We didn’t know shit then.”

Few groups have matured musically quite like the Gadjits, who have gone from skanking up the Inspector Gadget theme song and cranking out the occasional straight-punk number to playing a more traditional form of soulful ska before settling on its current formula, which blends gritty Sham 69-style guitar salvos, pure classic-rock energy that feels like the early Stones, and snotty stomp-along melodies reminiscent of The Knack and angry-young-man-era Elvis Costello. Though they’re particularly proud of their latest creations, the members of the Gadjits have no regrets about their previous releases.

“We still play our old stuff,” Zach says. “We love those records, and those songs please the crowd. But they seem to go off more to our new songs, or at least pay attention to them.” Among the early tunes that occasionally make their way onto the set list are the still-fresh-sounding “Gangster Girl,” from the Gadjits initial release; “Sassy Induced Bulimia,” a striking topical tune from the 1996 full-length Da Gravy on Yo Grits; and “Bad Gadjit,” a track from the 1999 Hellcat release Wish We Never Met. Though this tune always gets a warm reception when it’s played live, the group remains bitter about the tepid reaction the record received in its hometown.

“Wish We Never Met is a period piece we jumped into,” Zach says. “I really liked that record. But this town had already made up its mind about us when that record came out. We had been playing about once a month at the Daily Grind, but then we went out on tour with Hepcat for six weeks, and people were offended that we left town. We’ve been told that we ‘went L.A.,’ which is bullshit. We own a house and live in KC.”

When the band’s on the road, its members do their best to represent their region with the anthemic stop-and-start rocker “Leawood Rock,” which appears on a recent compilation assembled by famed drunk punk/skateboard god Duane Peters. The song’s title adorns the group’s sweatshirts and work shirts as well, making fans across North America unwitting advertisers for this Kansas suburb. Zach figures that spreading the word about Leawood is the least the group can do, now that it no longer resides in Johnson County. “We feel like sellouts now,” he admits. “We’re all KCMO and shit.”

Still, with a midtown punk club up and running, it’s a good time to be “all KCMO.” The Gadjits remember the dark days, when bands scrambled for a place to play and crowds became increasingly lethargic. “There’s been a huge change in enthusiasm,” Adam reports. “People aren’t coming out in droves yet, but everyone who’s come out to the last few shows has been having a great time. There’s no hostility. When things died down for all-ages shows and people went to Gee Coffee, there was just this crummy vibe in the air.”

In building the band’s early popularity, members of the Gadjits, high school students at the time, took advantage of their daytime surroundings, plastering hallways with flyers and encouraging their classmates to attend their gigs. Between bandmembers’ touring and settling into full-time jobs, such self-promotion proved difficult for a while, but Zach has started targeting the teen punk crowd again, with immediate results.

“I’ve been flyering all the high schools, and from looking out into the crowd, I can tell that a lot of the people there are young guys and girls from out south who got a handbill underneath their wiper blade,” Zach says. “Kids grow up, move off to college, and a whole other group of kids moves into the high schools. They need to be informed about good shows, so I’ve been campaigning.”

Fans who grew up with the group are now old enough to enter venues such as Fred P. Ott’s (where the band plays on January 14) and The Hurricane (where the group performs on January 25). Also, the band’s new songs are rugged enough to appeal to the bargoing classic-rock fan who might have found ska too exotic.

In recent months, the group has taken its always energetic live show to another level. Adam pounds out deep, driving beats; Zach nods vigorously in time with the bass lines; Brandon leaps into the air to punctuate riffs; and keyboardist Hilary Allen shakes her whole body while keeping her hands on her instrument. During the interlude to the explosive “We Were Right All Along,” Brandon “testifies” over a muted rhythm section backdrop, urging the crowd to clap along with the beat and speaking with a preacher’s commanding tone. When the band shifts into double-time to complete the tune at a full gallop, the transition feels more like gospel-influenced R&B (the Isley Brothers’ “Shout,” Aretha Franklin’s Live at Fillmore West) than high-speed punk.

“We’re all about the soul,” Zach says. “If the band had its way, we’d have a small horn section and three backup singers.”

If Hellcat had its way, the Gadjits would probably have a small horn section, but instead of adding soulful accents, these musicians would be churning out brassy melodies to accompany traditional ska ditties. The Gadjits’ expanding horizons might have alienated the label, but Zach explains that the feeling was mutual. “We were musically heading in a different direction than they wanted us to, and their marketing plans were headed in a different direction than we wanted them to. It just went sour. There’s no hard feelings. It’s probably a good thing.”

The Gadjits left Hellcat with a completed album, and Adam says many of the tracks on it might never see the light of day. However, he says, “We’ve got better songs now. We could make a whole other album from the songs we’ve written since then.” The group continues to shop its unreleased tracks to interested labels, and it plans to tour in the spring and, label status pending, release an album.

In the meantime, the members of the Gadjits are just glad to be home, playing in their living room and at familiar clubs instead of spending most of their days in a van. “We’re stoked,” Zach says of the group’s upcoming series of local gigs. “Now that we’re home and we have some time off, we just wanna fucking play.”