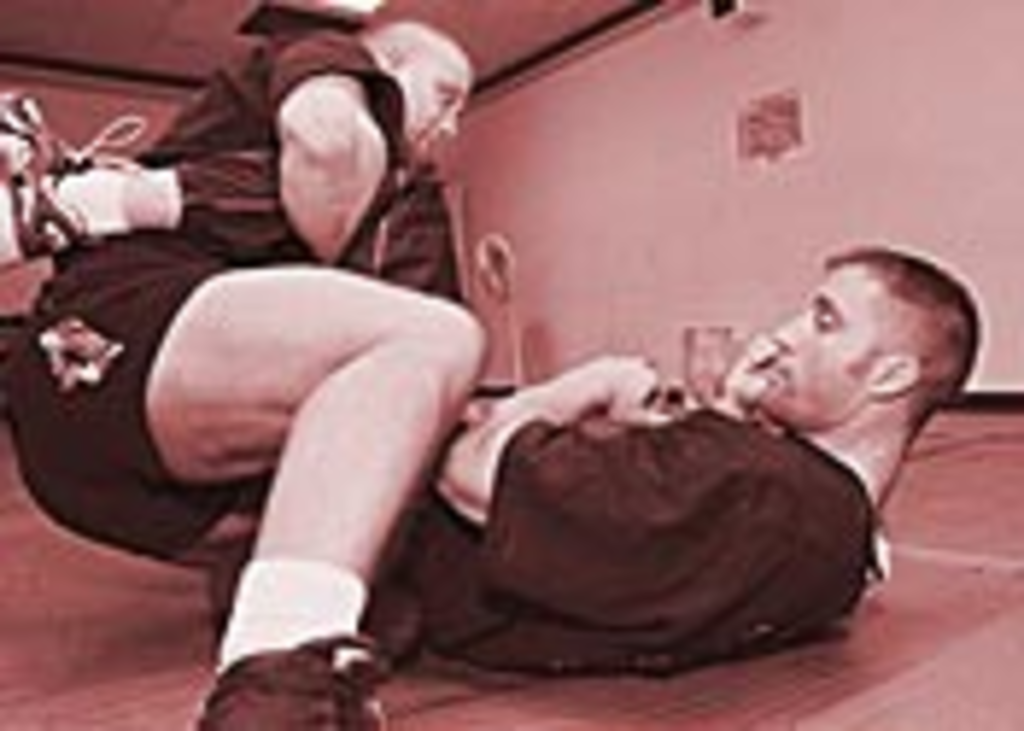 Brad Jones is 215 pounds of pure muscle. Standing 5-foot-7, with a buzz haircut, a deep purple shiner below his right eye, and a booming voice, he draws attention in the small training room at Moffett’s Gym in Shawnee when he walks in.

But those staring at this 31-year-old Ultimate Fighting Challenge (UFC) veteran are not fellow gym rats jealous of the guy who’s made it big, they’re the behavior-disorder kids he works with twice a week, teaching them the ins and outs of self-defense and self-respect with his American ju-jitsu class.

“You’re talking about kids who have been sexually and physically abused. Their self-esteem is pretty low. When we get ahold of them, that changes, and everybody has a great attitude,” says Jones, who himself has a bit of a troubled past. “We (Brad and his twin brother, Brian) are good with these kids because we had our own problems. We got suspended from three different high schools. We never did pick fights, but we never shied away from them…. We thought we were superheroes; we tried to stick up for people more than we probably should have.”

And that same spirit led Jones to his most recent bout against former world champion Guy Metzger in New York City. “(Metzger) had just fought Sakurabi — who was voted fighter of the year last year — and Guy went the distance with him. Nobody wanted to fight him; they said they had, like, three fighters and everybody was backing out, so they put an ad on the Internet.”

Jones sent in a tape, and after Metzger’s promoters reviewed it, the fight was his, on one condition. “(Metzger’s promoter) asked me how much I weighed, and I think I told him about 220, though I really weighed 228. He said I had to be 210 and if I wasn’t I had to run it off when I got up there.”

To make the task even more difficult, Jones had only 10 days to drop those 18 pounds. “My brother had me fast; I had just vegetable drinks…. Plus I had a bunch of guys rally around me and roll with me to help me shed weight,” he says.

After dropping the extra pounds, Jones was ready for his March 3rd bout, an experience he says was a bit nerve-rattling. “We walked in, and my brother and Steve (Crawford, head instructor at an American ju-jitsu school) were with me, and they were like, ‘Don’t look in the cage, don’t look in the cage, just walk up there and get in.’ But the more you do, the more you relax.”

The title bout was slated for two five-minute rounds, with a three-minute overtime, and Jones says that after reviewing several Metzger fight tapes, he went in cautious. “He was hitting me … but I wasn’t feelin’ him. He probably hit me 40 times, but I wasn’t gonna (give in). They stopped the fight because I was taking too many shots, and it was a good call.”

Jones says taking those punches was part of his overall strategy in the ring. “I didn’t really want to stand up with him … so my game was to work for position on the ground, so I would take four or five shots to work for position.” But brother Brian, who doubles as a trainer, says that even after that pounding, Brad was relatively unaffected. “The (fight officials) said, ‘Check your fighter! Check your fighter! Is he all right?’ And Brad looked over at me and he said, ‘I’m fine,’ and I told them, ‘He’s all right.'”

“I have a high threshold of pain,” explains Brad. But he also has the utmost respect for his opponents. “I don’t believe in trashing anybody’s name. Plus you look pretty silly if you talk trash and then you get whooped.”

Jones adds it’s often an ill-conceived idea to judge an opponent by his physical stature. “The thing about ju-jitsu, since that UFC has come out, you really don’t know, you don’t underestimate anybody. You’ve got some goofy looking guys, but you have no idea what you’re up against…. I respect everybody’s skills if they’re 300 pounds to 100 pounds, because it’s a sport where you don’t have to be big,” he says. And that fact, says Jones, bodes well for some kids and teaches a hard lesson to others. “These hardcore kids that are talking all this gang crap and acting like they’re so big and so tough are cream puffs (once they get in here).”

Jones spends his days at the Gillis Center, working with behavior-disorder kids, and he hopes that long after his fight career is over, he’ll still make a difference in their lives. “The no-holds-barred fighting, it’s the same as in high school. I’m not looking for ’em, but if somebody gives me a big opportunity, I’ll take it. I’m not scared to fight anybody.”

Jones’ next cage challenge comes next month, when he steps into the ring at the Beaumont Club. He also has tentative plans for a cage match in Iowa in May, but he knows his career path does not lie on the canvas. “I’m gonna be (here taking care of these kids) till I’m an old man,” he says with assurance.