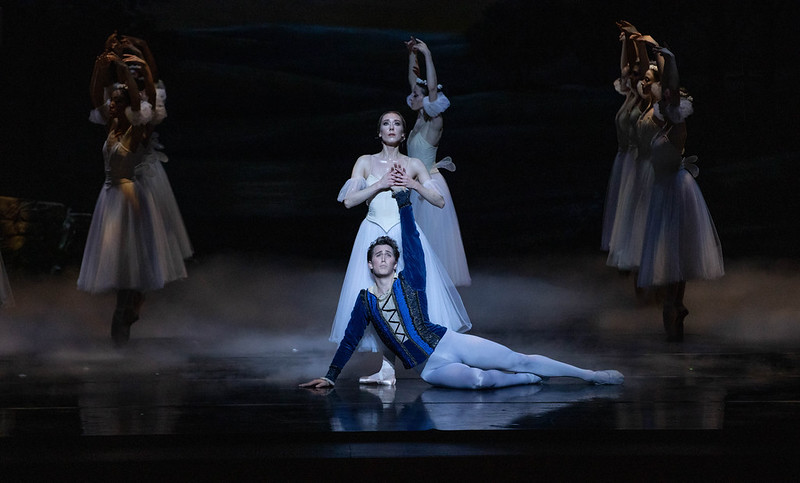 Walking up to the towering, luminous blue curves of the Kauffman Center and entering the pearlescent cavern of creativity while wearing a fancy (rental) dress is enough to get one into the “high art” mood.

The opening night of Giselle played true to this sentiment. A crowd of high-fashion semi-youth and KC’s elder “patrons of the arts” melded together and nervously took their seats in anticipation of the technicolor dream world lying dormant behind the heavy curtains.

Opening night in the performing arts has a magic to it that is akin to the rush of the grand reveal of an everlasting candy that never dissolves—a feeling one can only imagine was amplified during Giselle’s first-ever performance in the quaint Salle Le Pelletier in Paris during the summer of 1841.

The velvet veil lifted and the sparkling light reflected on the balconies faded. The orchestra’s first notes washed over the velvet darkness and we were transported to Wonkaland. The set was a splash of texture, depth, and vibrant colors, the graceful ribbon-laden athletes dashed about the stage with their melon-squashing quads, the story swept away all memory of it being 2022. We were all in the enchanted forest watching as equals.

There was a real dog at one point, and before intermission, I felt my heart ache and burn with Giselle’s own dramatic anguish.

The women’s restroom was filled with excited voices guessing at what had just happened. (We should have paid better attention to the crash course in sign language given before the first act began.)

Again, the anticipation of what could be behind the curtain for the second act was all part of the thrill.

When the curtain rose again our collective hearts panged at the change in scenery. We were no longer in the Technicolor fantasy world of new and foolish love but had been supplanted into the dark chill of our own mortal impermanence. Impressive feats of athleticism breathed across the stage as light and technically dense as the fog that bellowed around them.

At one point every dancer stood on their toes for what seemed like a world record amount of time, a feat that earned them a mid-act ovation. Gauzimer, grace, and longing filled the gaps between our grief and upon the resolution and curtain drop there was a moment of shared absorption.