Girl in a Coma’s Nina Diaz: I’ve gone through my last wormhole 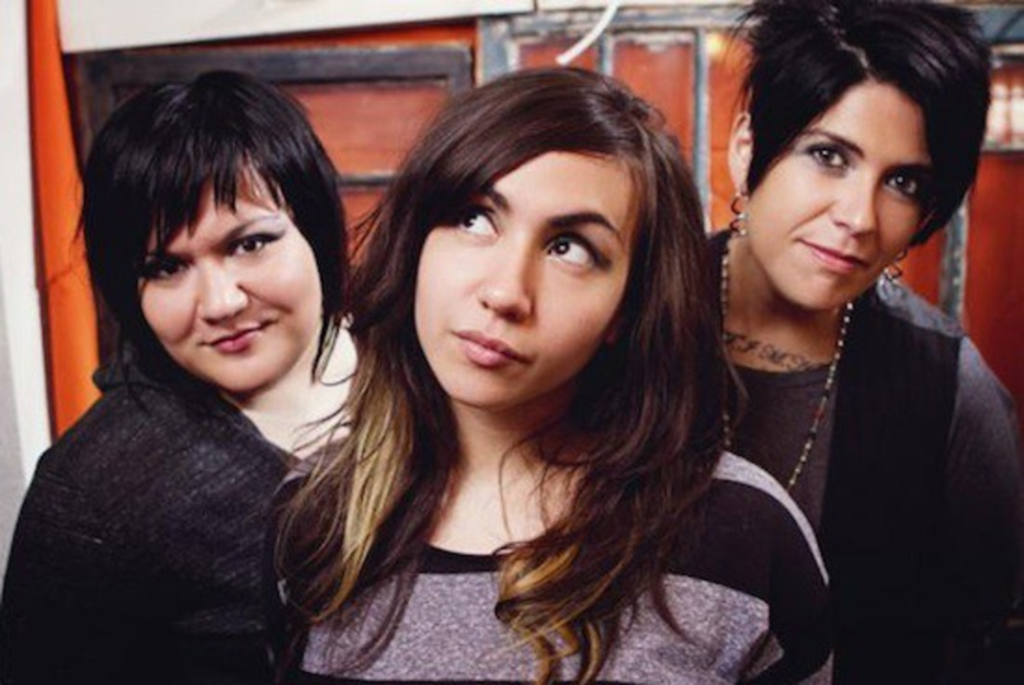 Girl in a Coma comes off as pretty tough. After all, the trio of friends – sisters Phanie and Nina Diaz and Jenn Alva – have been making their own brand of fast-paced, knife-sharp indie rock for nearly a decade. Their story by now is familiar: drummer Phanie and bassist Jenn met in high school and had ambitions to put a band together, but found themselves lacking a lead singer. Phanie turned to her then 13-year-old sister, Nina.

Now, at 25, Nina’s vocals are surprisingly mature. She is edgy and versatile, and together, Girl in a Coma presents a musical front that is taut and tightly focused. In 2006, they were signed to Joan Jett’s label, Blackheart Records, and soon found themselves rushed through doorways of success: opening slots for Morrissey and Segan and Tara, two Independent Music Awards, and their cover of Patsy Cline’s “Walkin’ After Midnight” featured on a commercial for Stuart Weitzman. But sunshine always casts shadows, and fame brought its own set of baggage to the door. The band of tough girls has been through some rough patches, and it all comes out in Nina’s voice.

Ahead of the Girl in a Coma show tonight at Czar, The Pitch dialed up Nina Diaz from the road.

The Pitch: Tell me about the tour you’re on right now. It’s a relatively short run, but it looks like a lot of fun.

Nina Diaz: The tour so far has been great. We played the other night [in Spokane], and there were only about 20 people, but even if there’s not as many people as we’d like, it’s still a lot of fun for everyone who does come out.

Girl in a Coma has been in the scene, together as a band, for nearly 10 years. What’s one of the biggest lessons you’ve learned about yourselves as a band in that time?

It’s to see my sister as my sister first, and then as a bandmate. In the beginning, of course, I was a teenager, and luckily I’ve learned my lessons through all the harmful things I’ve put myself through. The lesson has been to just communicate – and with Jenn, too. Jenn is my sister, and my friend, and then we’re bandmates.

Just last year, your most recent album, Exits & All the Rest, won an Independent Music Award for Best Indie/Alt. Album. Are you working on any new material?

Really? Do you have a release date? A project title?

I don’t know yet. [Laughs.] The most I can tell you is that there will be something from me soon.

I read an article recently in the San Antonio Current that focused a lot on your rediscovered spirituality. Do you feel like that’s affecting the content of the music you’re making?

The main way, as far as performance-wise, is that I’m actually present. Not to say that I wasn’t there before, but things that I was dealing with or whatever would kind of… I was so much in my head when I was on stage. But now it’s that I’m performing for myself, and that’s the point. When you’re going to a show, you want to get away from yourself. You just want to enjoy yourself for a couple hours. I want to be present, because I want to do this to help people, to reach people.

And the lyrics – in a weird way, I always thought that my lyrics were kind of psychic. More than me being psychic. Like, some of the things that I’ve written about in my past end up happening, and now I’m writing more positive things, and it’s great to see them play out in my life. I’m embracing it.

Is it weird for you, being surrounded by so much of the negative stuff that comes with being in a rock band – the substances, the hard schedules, the way it’s basically impossible to be healthy while touring – when you’ve pulled yourself out of that?

It’s not so much anymore. When you’re a teenager, you feel so much pressure – and with any teenager, there’s that peer pressure, and when you surround yourself with older people, that’s times ten. Now I’m 25, and luckily, I went through my last wormhole as far as falling into anything like that. I am more spiritual – and I think there’s a difference between spirituality and religion. As far as spirituality, that’s your soul. I am trying to focus on my soul, and I’ve learned that you are the company that you keep, and I’ve learned a lot about having assurance in yourself. I’ve learned to tell myself, “You’re better than this, you can handle this,” and that’s the message that I want to give to younger girls in the scene: you don’t need to sleep with just anyone, you don’t need to try that drug or drink all that beer just because it’s offered to you. You don’t have to subject yourself to anything less than what you truly are. And of course, you’re going to go through phases – everyone does – but as long as you learn your lessons, you’re fine. It comes down to you following through. You have to help yourself first, and hopefully that’s the message I can carry through.

Given all that you’ve seen and gone through, is there anything you would change about the music industry?

I don’t think I would change anything. If I changed anything, I wouldn’t be the person I am today.

What can we look forward to at your gig at the Czar on Thursday?

Just us girls, having a good time and being ourselves and playing a couple new tunes. We’re excited to be there and have conversations with whoever wants to talk to us.

Girl in a Coma plays tonight at Czar Bar with Grenadina. Info here.