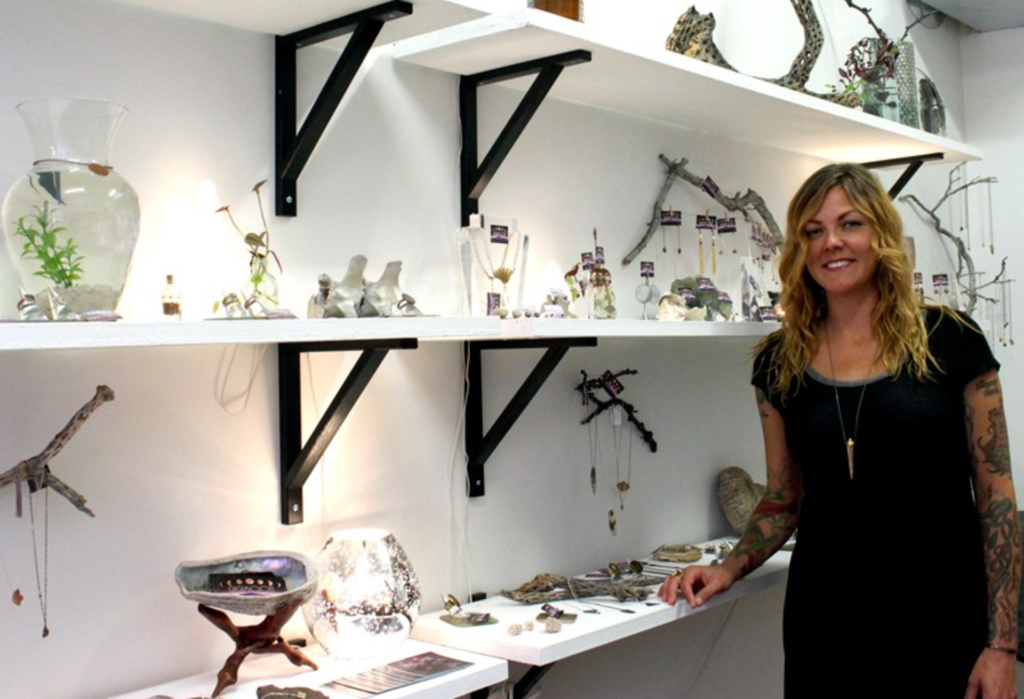 Garnet Booth jokes that she should be a “gemstone therapist.” Since founding Gigi Moon Gems earlier this year, Booth has discovered that people visiting her jewelry studio in the Bauer Building (115 West 18th Street) are often drawn to specific stones based on what’s happening in their lives. A recent heartbreak might call for something green. A shot of confidence for an upcoming job interview might require rose quartz.

“People often choose a certain stone, and when we look it up, it’s exactly what they need,” she told me one afternoon when I visited her studio. “I should really get a license.”

I was skeptical that a stone could improve my self-esteem or assuage my social anxiety, but when Booth brought it up, I found myself wanting to believe her. That day, she was wearing her “cosmic crystal” necklace, which resembled a miniature bronze icicle resting on her chest. She said the “empowering” piece was one of her favorites, and she certainly had a believably calm self-assurance.

Ethereal and intriguing, many of Gigi Moon’s offerings are inspired by Booth’s time last year in Santa Fe, New Mexico. The desert influences are easy to spot: rings and necklaces featuring fossils, sage, saguaro cactus seeds, and garnets that Booth personally dug out of anthills. 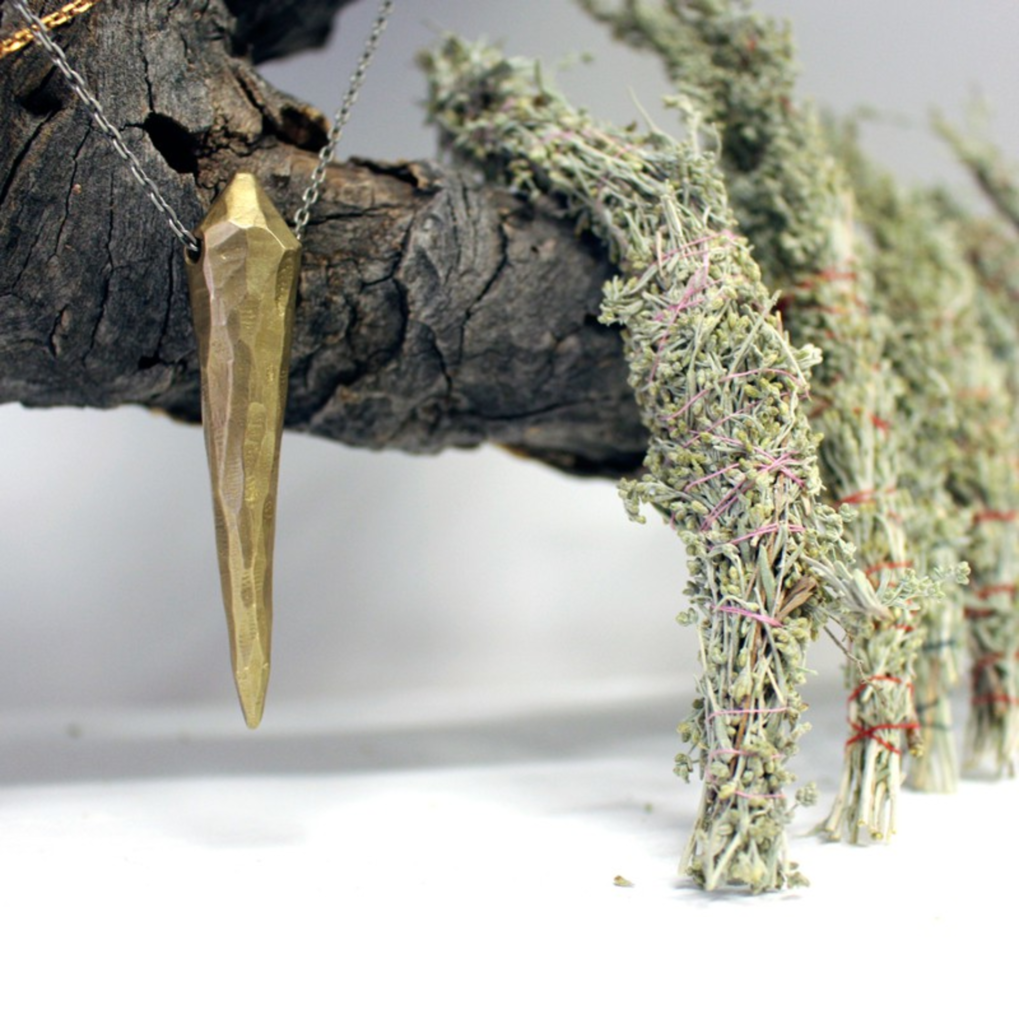 Booth’s recent Cosmos collection also features some otherworldly flourishes. Stainless-steel earrings and necklaces are cut in the distinctive geometric shapes of crop circles, and certain stones look like supernovas exploding in the depths of the Milky Way. The “pillars of creation” necklace contains an actual photo of the Eagle Nebula, 7,000 light-years from Earth, and a squash-blossom necklace depicts the phases of the moon.

“My husband watches Ancient Aliens all the time, and I watched the series Cosmos twice,” Booth said of her predesign research. “I love jewelry that has a story.”

Right now, Booth has her eye on the upcoming holiday season. She recently bought an 18-pound bag of coins that a friend of hers had collected from around the world. That afternoon, we stood in the fading light, sifting through a few handfuls that she had scattered on her worktable. The faded currency was oddly beautiful, some from the 19th century. Her workshop also held numerous containers filled with gems sourced at the Tucson Gem and Mineral Show. 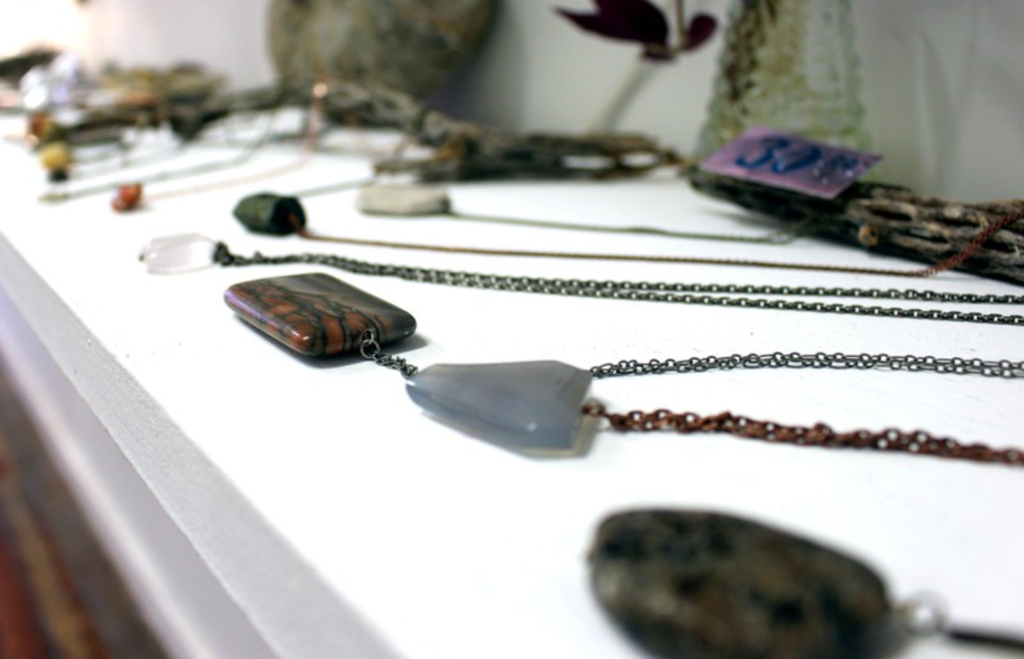 “I keep telling myself I can’t buy more until I use up what I already have,” she said. “But who am I kidding.”

Booth plans to host regular sales in her workshop, including First Fridays, ensuring that some items are priced so that those with $20 in their pockets can snatch up an original piece of wearable art. Some artists view the business side of things as “selling your soul,” Booth said, but she has been in the game long enough to know better.

“Being a starving artist has a romanticism,” she said. “But after a while, you realize you’ve gotta pay your bills.”

Prior to Gigi Moon, Booth partnered with St. Louis artist Katie Miller to create Scarlett Garnet Jewelry. The two women dissolved the business earlier this year. Booth said she’s proud of what she and Miller achieved in their eight years together, but Scarlett Garnet had run its course.

Gigi Moon will likely remain on a smaller scale, but the pieces that Booth creates may be more personally meaningful. “It’s easier to tell one person’s story,” she said. 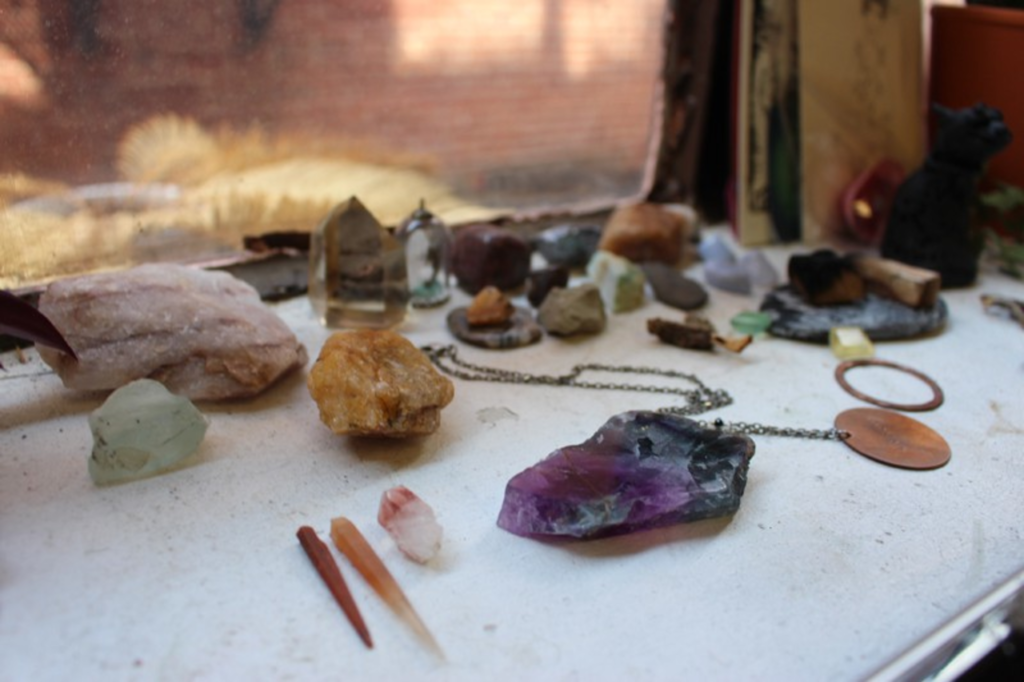 “I have no desire to be as big as Scarlett Garnet,” she added. “I just want to come to work and be creative and do what I love.”
And it doesn’t hurt if she can provide a little free therapy along the way. When I stopped by Booth’s studio later that week for the Desert Treasures sale, I wandered around munching on some sea-salt caramels and waiting for a stone to speak to me. The one that I finally grabbed featured sage and garnets suspended in resin, which a little Internet research revealed will help cleanse my aura and attract love and devotion into my life. Who couldn’t use some of that?