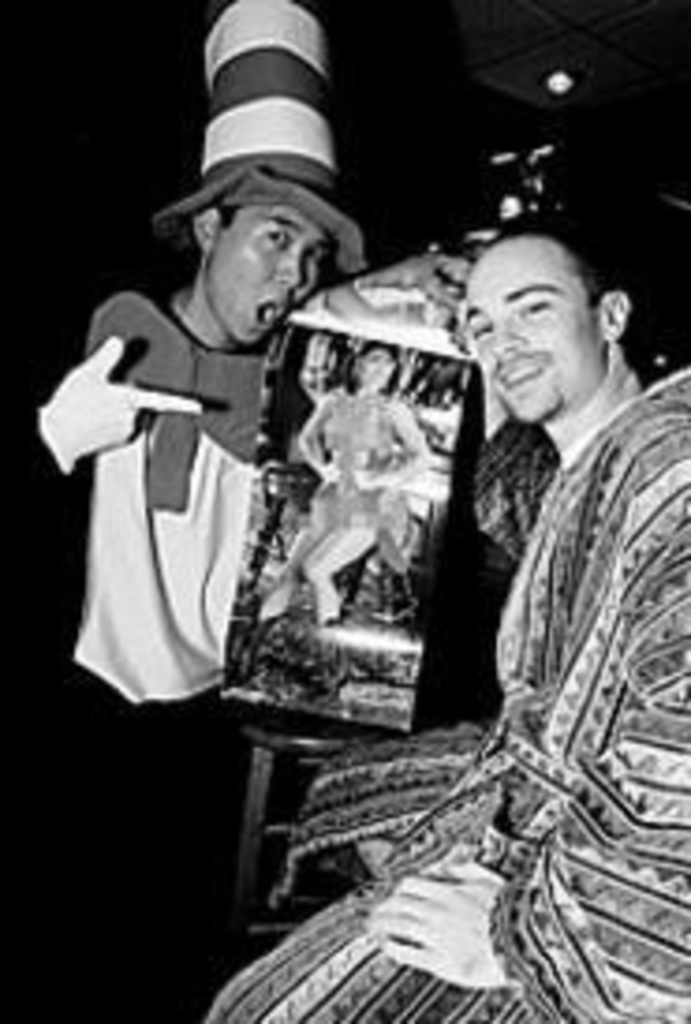 OK, we’re starting a movement to change the name of Halloween to Slut-o-ween, based on the many scanty costumes we saw over the course of the weekend. Sure, we’ve done the sexy _[fill in the blank: cat, devil, Girl Scout, Monchichi]_ look in the past. But, ladies? Lingerie is not a costume. And is it us, or are pimps ‘n’ hos so mid- to late 1990s? The whole “I’m a whore and can act all crazy and shit!” thing = boooring.

Of course, Slut-o-ween is a boon for the guys, and our male friends were all about the skanktastic looks out there. “The goal for the night is to feel as many boobies as possible,” said one, facetiously. Or, um, at least we think he was being facetious — at the end of the night, he had a camera full of pictures of his face near a lot of cleavage. Naturally, this breastfest occurred in Westport on Saturday night, when we hit Tizers, where the Midwest Sports and Social Club was throwing a shindig. We figured that if the party was lame, well, the costumed drunkoids careening about Westport would be entertainment enough for us. So the NR (dressed as a flapper with a blue bob wig) corralled her Research Assistants (which included Ali G, Borat and heavy metal guy) and headed over at the bitching hour.

“Ah, the runaway kids,” said RA Ali G (aka Kevin) as we walked by the corner of Broadway and Westport Road. “Every day is Halloween for them.”

Décor-wise, Tizers looks exactly like its predecessor, Mill Creek Brewery. The drink menu was sizable, and we sampled the Tizers rum blaster (Malibu, Captain Morgan and Cruzon Light rums and orange, pineapple and cranberry juices, topped off with a splash of Bacardi 151). The party was great fun; a number of diverse people showed up, but the place wasn’t annoyingly crowded, and most everyone was über-friendly. Of course, the costumes provided a natural icebreaker, plus many were also happily lit and outgoing, which was awesome to see. The level of mingling among urban tribes probably reached an all-time high at bars all over town this past weekend.

We soon met Janel, who was dressed in a red shirt, devil horns and a tail, and her friend Kristin, 30, who was sporting vampire fangs. The topic of singledom came up, which we bonded over.

“I’m the only single person everyone knows,” Kristin said. “Her tail is the only action I’m getting this evening,” she added when Janel playfully and quasi-drunkenly rubbed it on Kristin’s leg.

“So who in this bar do you want to fuck?” we asked.

“Well, there are pretty cute guys here,” she said. “I’m not opposed to meeting someone in a bar, but I won’t sleep with him that night.” She later told us of a pickup line she got. “That guy,” she said as she pointed out someone wearing what seemed to be a regular button-down shirt and pants, “came up and asked, ‘Do you dance?’ I said yes, expecting him to ask me to dance. He then said, ‘Well, I can’t dance, but I can strip’ and acts like he’s unbuttoning his shirt. I was waiting for him to strip! But then he goes, ‘Uh, I have to check on a friend’ and left.”

Disappointing. Guys, if you make a claim like that, you have to follow through, damn it. And if you’re lucky, we’ll stuff a dollar down your pants.

We also ran into Marcus, 22, dressed in a baby-blue ruffled tuxedo shirt and pants. He wore a mullet wig and a fake mustache and carried a microphone.

“How many times have people said to you tonight, ‘I’m Rick James, bitch!’?” we asked.

“The whole time I’ve been here,” he answered. He told us he was supposed to be Sexual Chocolate from Coming to America, but because so many people used that line, he decided to be Rick James.

His friend Lauren, 22, who was wearing a Campfire Girls vest, came up after our interview was over. “Can I tell you something about Marcus?” she asked. “We went on a float trip with him over the summer, and he did not bring any clothes that were appropriate for it. He had Polo jeans, all brand-name T-shirts … so we’re floored he’s wearing thrift-shop clothes.”

Speaking of clothes, our RAs pointed out the black, tapered Levi’s worn by a be-mulleted guy with a mustache. We asked what he was dressed as. He was not costumed. He was, however, dirtily dancing with a sexy witch and a sexy firefighter in red hot pants and a barely buttoned jacket that revealed a taut stomach. It turns out Robin, 40 (the witch), is the mother of firefighter Crystal, 23. We were amazed — they looked more like sisters.

“Do you guys party together a lot? What’s that like?” we asked.

They nodded enthusiastically and told us they also go to Johnny Dare’s quite a bit. “And when the guys watch your daughter in a bar, it makes a mother proud,” Robin said as she and Crystal grinded together. We were even more stunned to hear that Crystal has three girls, too (ages 5, 4 and 2).

“How did you get back in shape after having three kids?” we asked, incredulous.

Then, there was “Momo,” 26, dressed as the Cat in the Hat, and his friend Nick, 27, who was wearing a patterned bathrobe. We weren’t sure what Nick was supposed to be, until we saw the rolled-up copy of Playboy in his pocket that confirmed he was Hef.

“Are you getting any ass in that get-up?” we asked Momo.

“How long has it been?” we queried.

“About three months ago,” he replied.

“I made her come seven times,” he said, deadpan. “No kidding. That’s what she said, anyway. I’d like to believe her.”

He and his friends later taught us how to say things like “Can I do you?” and “Can I eat your pussy?” in Japanese and Mandarin. Sexcellent. We’re fans of learning new tongues.