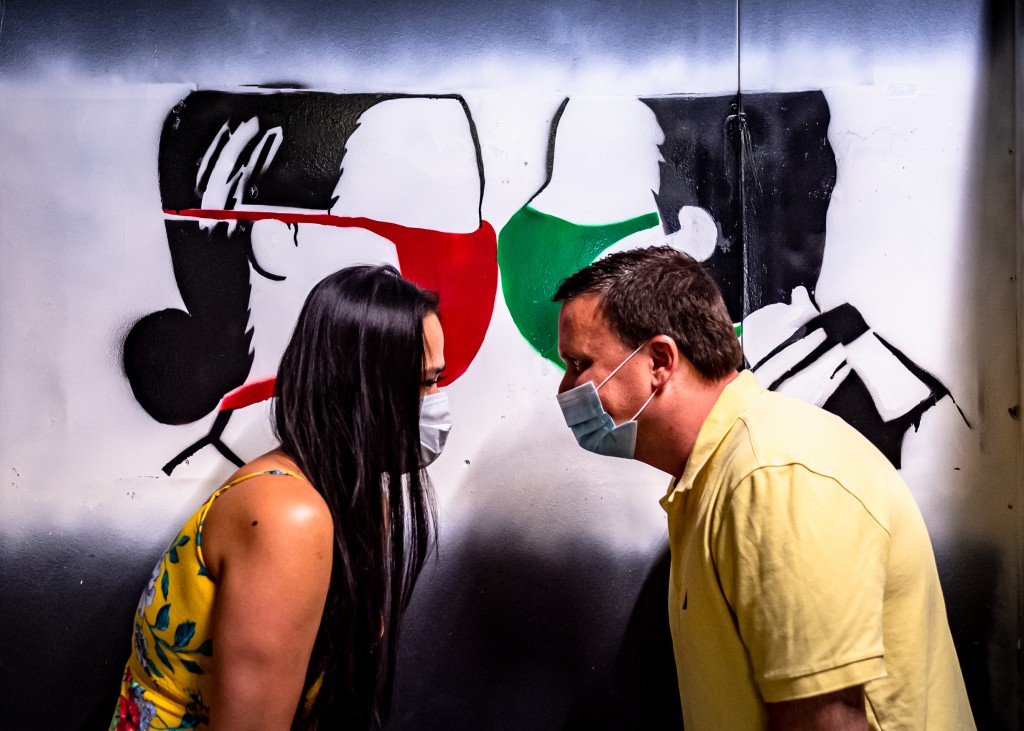 There are a lot of art galleries in Kansas City but none quite like Graffiti Attic in Union Station. It was an idea born in the middle of a pandemic by local businessman, Levi Thomas and partner John O’Connor.

There was no other entertainment like it in KC.

On March 18, 2020, SurviveKC shut down with the rest of the city by order of the mayor to fight the spread of Covid-19.

After opening Survive KC in July of 2019 as a Zombie Apocalypse theme laser tag game, John O’Connor and his partner Levi Thomas were brought in after the first of the year as new managing partners/owners in the endeavor. Like everyone, they loved the apocalypse theme but felt the unique space could be more exciting and create even more visual and mental sensory stimulation for fans by integrating our local community’s art scene into the mix.

Levi Thomas was not the only person having trouble with the world at this time. A good friend of his was starting a one year sentence in jail. His friend was a highly talented street artist who had gone one night to a favorite spot to paint–the Old City Jail just on the edge of the 18th  & Vine District.

The abandoned building, which resembles an old castle had been a favorite hangout for kids, the homeless and street artists for decades. Every wall of the crumbling structure was covered in spray paint. What this unnamed artist didn’t realize was that the property had recently sold and the new owners were prosecuting all trespassers. The situation was made worse when the police discovered the handgun he carried for protection from the homeless who had threatened him in the past. A ticketed misdemeanor became a one year sentence due to that handgun.

“I realized that there is literally no place that is safe for these kids to paint in Kansas City”, Thomas explained. It was then that he realized that the SurviveKC maze was composed of over a half-mile of a bare wall. So he created a Facebook page and joined several local art pages. He made a video of himself walking through the maze to show what was available to paint on. He then invited local artists to come up to the 7th floor during lockdown to paint whatever they wanted to paint. That video received over 100,000 views and 12,000 comments. It also attracted over 200 artists who all came to overcome their Covid-19 boredom.

Inadvertently, Thomas created a small artist’s commune. Local artists work next to kids from the West and East sides of town, exchanging knowledge about how to use paintbrushes and spray cans for specific effects. Thomas has become a mentor to several of the younger artists teaching them that their art can also be profitable. Several have received offers for commissioned work. Some have learned that the empty spray can you paid $9 for can be painted on to create a unique artwork that sells for $30. Thrift store shirts with original artwork silkscreened onto them are for sale in the lobby. Some artists have brought their children with them and Levi lets them claim a little piece of a wall for their creations. In a world where school is canceled, there is comfort in knowing you can still create and play. It’s a happy place when the artists are working.

The artwork reflects the times we live in. Masked faces, tributes to George Floyd, prayers for the planet and Mickey Mouse are all there. The maze has become a random microcosm of the Summer of Covid-19.

SurviveKC is still operating except instead of fighting zombies in an open admission situation, you have to rent the space for your group of up to 15. Now you only play and interact with your own group out of concern for Covid-19. The live actor zombies are no more. Instead of playing laser tag in a haunted house theme, you play in a world of urban art. And if laser tag is not your thing, you can visit the 7th floor every First Friday when SurviveKC becomes Graffiti Attic in Union Station.

Don’t get lost in the maze and help a local artist by purchasing some art while you are there.