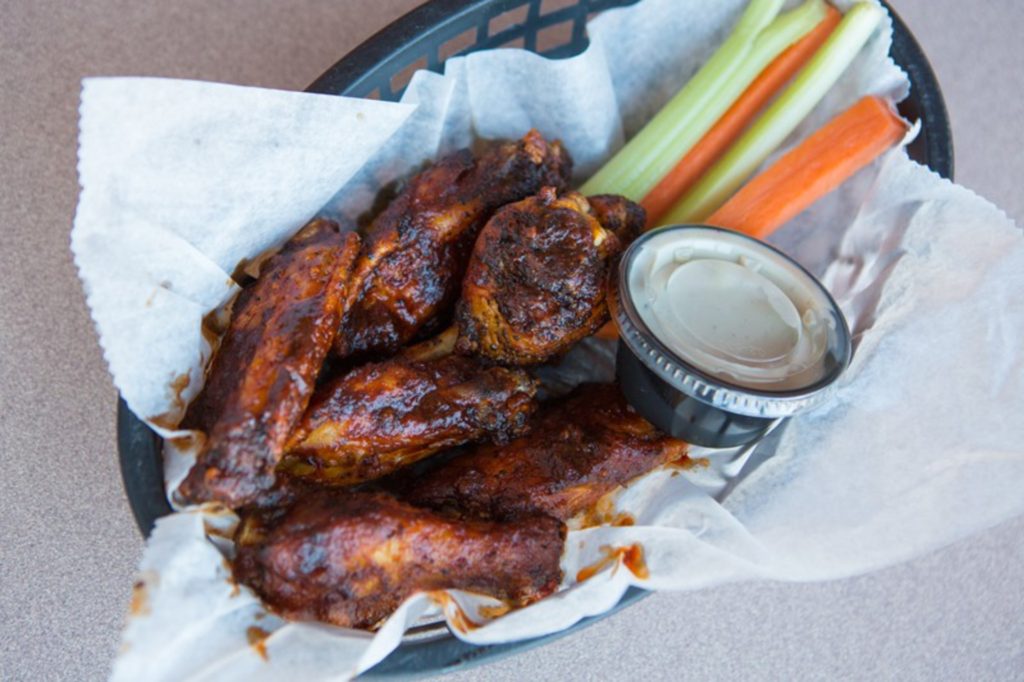 The Death Wings arrived in a paper basket. They came with carrots and celery sticks and some blue-cheese dressing. And a full pitcher of ice water.

The chicken was shellacked with spices, speckled deep-red and brown: the colors of dirt and blood. Merely being in their presence made my nose burn and my eyes water.

“That smells painful,” my boyfriend said.

We had chosen a secluded corner in Grinders, so that I could be relatively unseen while undertaking this experiment in Scoville-unit fury. Our server, for one, didn’t want to watch. He lobbied hard against my order, basically restating the menu’s strongly worded warnings regarding the restaurant’s Near Death Sauce: “This sauce is so F-ing HOT!!! It will blow your mind and burn off a few taste buds.”

I listened and then ordered anyway.

“That’s not cool,” the server said. He wasn’t smiling even a little. “How about I bring you some Molten Wings?”

“No,” I said, trying to sound self-assured. “I want the Death Wings.”

He gave in, the way a bartender might pour a drink for someone who does not need another.

Now he was standing by our table, trying not to grimace as I ripped off a chunk of meat with my teeth. My entire face immediately started burning. I wanted to wave my hands and run around the room hollering swear words. Instead, I sat and smiled. After years of practice, I was good at riding out the initial pain of a spicy dish. But was I a good enough actor?

“Is this not affecting you?” the server asked.

“Oh, it’s affecting me,” I said. A lava flow of snot was starting to drip from my nose.

“It’ll be a few minutes before it really hits you,” he said.

He was right. The Near Death Sauce delivers a slow burn that starts at the back of the throat and gradually encompasses the entire head. Imagine sitting in a steam room infused with horseradish or holding your face 2 inches above a pot of boiling water. I was able to finish one more of the wings before the heat became intolerable. The spices – cayenne pepper and habanero mash, among others – had overwhelmed all five of my senses with their 337,000 Scoville units of hurt. (That’s approximately 30 times spicier than a jalapeño pepper.) Tears ran freely down my cheeks. I was momentarily deaf.

“It’s really not that bad,” I said, my hands trembling. “Am I shouting?”

I shouldn’t have been surprised by the intensity of the wings. A friend once tried a bit of the sauce – a fleck on the tip of a toothpick – and reported: “Things were not OK – at all.”

In 2013, Near Death won top honors for hottest sauce and best ghost-pepper sauce at the Houston Hot Sauce Festival’s People’s Choice Awards, where it was judged against other feats of heat from around the world. And a quick Google search yields such phrases as “a destroyer of livers and bowels,” as well as videos of people wigging out after eating the stuff. It is basically a weaponized condiment.

Under all that heat, though, a surprisingly good flavor emerged. The hell wizards at Grinders have managed to concoct a substance that destroys your taste buds but leaves you, against all logic and in defiance of all you know to be true, wanting more. That’s a singular culinary accomplishment. It also means that – once I could sort of feel my mouth again and once my body could regulate the temperature of my face – I was able to devour three more of the wings. (Pro tip: Saturate the wings in blue cheese.)

“Why are you still eating those?” my boyfriend asked, peering at me over the small mountain of tissues I’d discarded beside my plate. My facial dripping had resumed.

“It’s kind of refreshing,” I said, unable to feel my tongue. “Like a brisk jog.”

I’d come through a plateau and found the runner’s high: I felt reinvigorated, sinuses and mind clear. I even ate a few of Grinders’ three-for-a-dollar tacos after finishing my fifth wing. My stomach was steel.

Then, on the drive home, it all fell apart.

I had put the Death Wings inside my body. Now the Death Wings wanted out – and it was going to happen on their schedule, not mine. That server was right. Definitely not cool.