Get Smart! on 40 years in a band and a career of zero expectations 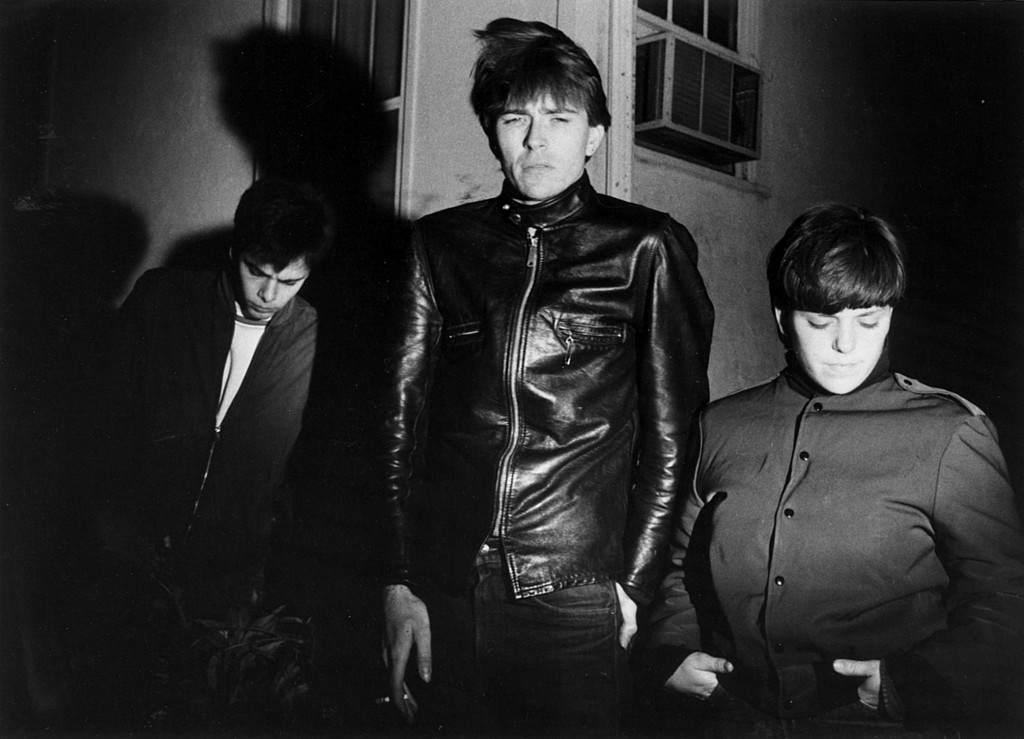 Get Smart! and their smoldering good looks. // Photo by Virginia Lee Hunter

It’s the very first day of a week of brutal heat when I hop in my car to drive out into the country south of Oskaloosa to meet with the members of Get Smart. By dint of luck, drummer Frank Loose is in town from Florida to practice with guitarist/singer Marcus Koch, and singer/bassist Lisa Wertman Crowe has joined us via Zoom from Chicago. It’s a surreal experience to go several miles down a gravel road off Highway 59, park next to a well-appointed, low-slung house under shade trees, and walk up to a house, only to hear the sounds of a punk band practicing inside.

I ring the bell, and I’m greeted by Koch’s two dogs, Pauly and Pogo, barking furiously. Koch laughs as he opens the door—saying the boxer and dachshund are “completely harmless” as they swarm around my ankles—and invites me in. Loose is sitting on a couch, and Crowe is on the screen of Loose’s MacBook. They both greet me, and I grab a seat across the living room—social distancing and all—and we start to talk.

Get Smart formed in Lawrence in the fall of 1980, and the band’s sound meshed perfectly with what was happening in independent music at the time. Contemporaneous with other area acts like fellow Lawrencians the Micronotz and Wichita’s the Embarrassment, Get Smart was a tight, angular three piece who also managed to sound big and reverberant. The band met when they were all living at  the University of Kansas’s Oliver Hall dormitory, and Get Smart was originally born out of friendship.

“[Marcus] was playing the Sex Pistols in the room next door, and I was like, ‘Play it louder!’” Loose says, with the other two band members laughing at the memory. “Nobody else wanted to hear it louder, but I did.”

Later on, Koch and Loose were sitting in the cafeteria, when Crowe (then Lisa Wertman) walked by. While Loose and Crowe were involved for a short time, Loose laughs when relating the story of a “short, passionate thing.”

“We became much better friends,” the drummer emphatically states as Crowe agrees. “I think I’m better as a brother, and she’s better as a sister.”

After Koch went home to Chicago for the summer, Crowe and Loose got their instruments and began practicing together, and when the guitarist returned to Lawrence in the fall of 1980, they began crafting the sound for the band which would soon make their debut, first playing a house party, then officially debuting on Halloween 1980 with a show at the Greek Sports Desk.

“The radio station [KJHK] was a catalyst for a lot of that, because otherwise, you wouldn’t have heard a lot of that music,” Loose explains. “As long as you were in that 10-watt radius, you could hear it—the Ramones or the Clash or whoever.”

“There were a lot of people just eager for new music,” agrees Koch, explaining that both he and Crowe did stints as KJHK DJs during their time at KU. He points to the fact that the scene at the time was a line of continuity: “People listening to bands, people going to see bands, and playing the music.”

“As soon as we could, the whole idea was to get out and play live,” Koch continues, dogs barking the background. “We didn’t want to be a cover band. We wanted to produce our own music and be a part of an incredible scene. There was a lot of support for alternative music at that time. Everyone went to Off the Wall Hall that was interested in music.”

Crowe takes this opportunity to read a quote from something she had written for Brendan deVallance’s Splooft Cough-Up, which she feels encapsulates what the scene was all about in that era.

“‘The music that was on the radio and in the public consciousness in the late ‘70s and early ‘80s just wasn’t what was in our heads,’” Crowe reads. “‘We were too nervous, too excited, and too creative to let Foreigner or Journey be our musical wallpaper.’”

Within months of forming the band, Get Smart was touring up to Chicago and out to St. Louis, Lincoln—“anywhere that would host us,” says Koch. From there, it was their goal to then bring those bands back to Lawrence, creating a network of places to play and stay, and people with whom they formed further relationships. That’s important, says Crowe.

“Being in a band was an act of rebellion,” the singer and bassist explain. “Having the audacity to put a band together and go on the road to play shows was a rebellious act, because everything was so commercial back then. That’s part of what made it so incredibly exciting.”

For a band that formed the same year as The Pitch, the importance of print media was crucial to Get Smart, although it took a different form than what they got from KJHK. Much of the band’s first musical distribution came from having their songs featured on cassettes and flexi discs released by the likes of the Talk Talk and Sub Pop fanzines, but the members of Get Smart were rabid fans of the music press.

“We used to fight over copies of NME, because that’s where all our info used to come from,” recalls Crowe. “We used to have to have to sign up, so that they would hold copies for us, and I used to run there to get the issue every week because I was so excited to read about what was going on in England.”

“You would find fanzines at Love Records or Rock Therapy in Kansas City,” Loose says of using these publications as a resource. “You could go buy one from Lincoln or St. Louis, then you’d send your little tape to the writer there, and they would review it, and then you’d see where they were playing [in that city].”

That would work out well for Get Smart. Loose notes that they have a spreadsheet containing all of the band’s shows, and over the six years he was in the band, they’d end up playing 300 gigs—nearly a show a week.

“But that was it,” Koch says. “There was never a time where we’d say, ‘We better not go out.’ It was more, ‘We have nothing. We’ll probably make nothing. Let’s go, anyway.’”

In the band’s first full year, 1981, Get Smart would release the “Numbers And Colours” flexi disc, their own Words Move 7-inch, and appear on both the Sub Pop 5 and Fresh Sounds from Middle America compilation cassettes with an LP’s worth of songs strewn across them. Their two LPs, 1984’s Action Reaction and 1987’s Swimming with Sharks, would come after they’d decamped Lawrence for Chicago in 1983.

Crowe and Loose had graduated from KU. Given that Loose’s degree was in graphic design, he knew that he could get a job no problem. Additionally, since Koch was from there, it gave the band a certain amount of safety netting, in that they could possibly crash in his parents’ basement, should things come to worst. The decision, however, wasn’t an easy one.

“We really kicked it around for a long time,” Koch recalls. “What we wanted to do was be in a hub of local music, but we also felt that it was important to reach as many venues and scenes as possible. We could have stayed in Lawrence, and sometimes, I wonder if it wouldn’t have been better, because Lawrence was a great hotbed for all of this stuff.”

Crowe offers a counterpoint as to why Get Smart took off for a larger city: “In Lawrence, at that time, the streets still rolled up on Sundays,” she explains. “really nothing to do, at least one day a week, and the idea of living in a big city was exciting.”

“I used to say that the police outnumbered the people in the summer,” agrees Loose.

The band is back to practicing again because they plan to perform live together for a 40th anniversary show at the Bottleneck on Saturday, November 7. It marks the first time the band’s been together in 30 years, and the first time the original lineup has played together since 1987, although Koch did knock out a set of Get Smart tunes at the Replay in July of 2008, backed by members of his Lawrence honky tonk band, Cryin’ Out Loud. As a matter of fact, when Loose left the band 33 years ago, he packed up his drum kit, and until January of this year, hadn’t gotten behind the kit since.

“Literally: When I stopped being in Get Smart, I sold the drum set and bought camera equipment,” the drummer says. While there’s a demo that Crowe, Koch, and Loose made with engineer Iain Burgess in 1987 for what was to be Get Smart’s third full-length that will be remixed and released, Loose sees this musical coming back together not just as a reunion, but a chance to make something new.

“For me, the reconnect isn’t simply to play the songs we made and loved, but to make a five-year plan: Let’s start writing new music and things like that, because I don’t just want to rehash things if I’m going to do it. I can just put the record on.”

Koch sums it up perfectly as we wrap up: “I haven’t been this excited about something in a long time.”