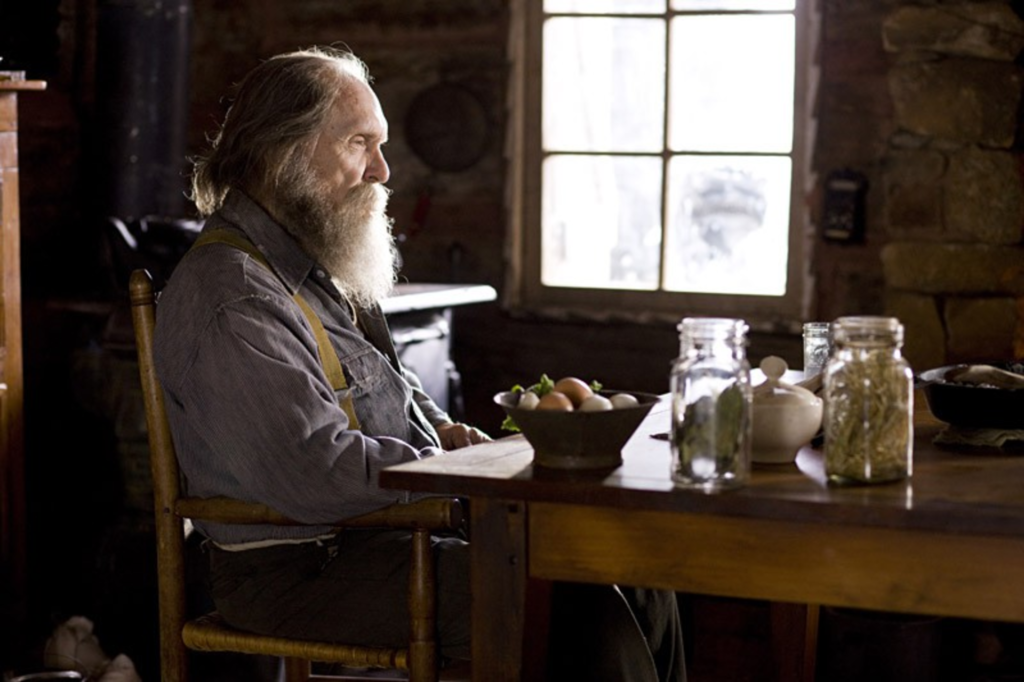 No Damn Trespassing, Beware of Mule!” warns the hand-carved sign posted near the country cabin of Tennessee recluse Felix Bush (Robert Duvall), whose abrupt decision to re-engage with the larger world propels Get Low, an imperfect but rewarding new film.

It is 1938, and Felix has been in a self-
imposed exile for 40 years. (“The first 38 are the hardest.”) He decides to throw himself a “living funeral,” so he can hear what people have to say about him. Ads will be posted, a big prize raffled and people from four counties invited to attend. To organize everything, Felix hires Frank Quinn (Bill Murray), the nearby town’s fiscally stressed funeral director — “What do you do when people won’t die?” — and his idealistic young assistant, Buddy (Lucas Black).

If the idea of a hermit throwing himself a funeral sounds vaguely familiar, that’s because screenwriters Chris Provenzano and C. Gaby Mitchell are drawing on the true story of a Tennessee hermit who did indeed throw himself a pre-death wake in ’38, one that reportedly drew at least 8,000 attendees. By all accounts, it was a rousing, music-filled good time. But for this fictionalized version, Felix has been given a 40-year-old guilty secret that he’s ready to unburden himself of, at long last.

It wouldn’t be fair to reveal the details of Felix’s dark past, except to say that it involves a beautiful woman who died in a fire that he may or may not have had a hand in setting. Near the end of the film, after nearly chickening out, he stands atop a wooden stage and makes his confession into a microphone before hundreds of strangers. Duvall delivers this speech with a virtuoso range of vocal tics, from nervously gulped words to a sudden bark of sound that’s half-laugh, half-scream.

It’s deeply felt work, but director-editor Aaron Schneider, making his feature debut after winning a 2003 Oscar for Best Short Film, Live Action, undercuts Duvall by staging the scene in a distractingly awkward way. Felix, it turns out, isn’t really speaking to the crowd; he’s speaking to Mattie Darrow (Sissy Spacek), an old girlfriend, newly widowed and newly returned to town, who never understood why he retreated from her and from the world all those years ago. From the stage, Felix reveals his sins and pleads for Mattie’s forgiveness, but Schneider has literally placed the two actors hundreds of feet apart, making an emotional connection between them next to impossible.

And yet, despite that maddening third-act stumble, Get Low is a pleasure to watch. Provenzano and Mitchell’s screenplay has a streak of melancholy running through it that’s right for the film’s Depression-era setting and for Felix’s heavy-heart dilemma, yet the script is also dotted with little drops of sly humor. When Buddy, the funeral-home assistant, describes to his boss the “wad” of money he saw in Felix’s hand, Frank says, “Oooh, hermit money. That’s good.” The gleeful delivery of that “Oooh” is vintage Bill Murray, but the lovely thing is that Murray is not trying to sell a joke; he’s simply being Frank Quinn. It’s a classic performance.

Surely it was the company he was keeping that inspired Murray. Duvall and Spacek have never been in a movie together, yet their acting styles are so similar that it feels as if they have a long onscreen history. They have three key scenes together, including one that finds them walking together down a wooded road. Nothing much happens. They talk and laugh, and their bodies sway back and forth toward one another, like young lovers courting. After a time, Felix offers Mattie his arm, and she takes it with a firm, happy clutch — two characters, two actors, at ease and in joy, delighting in each other’s magic.