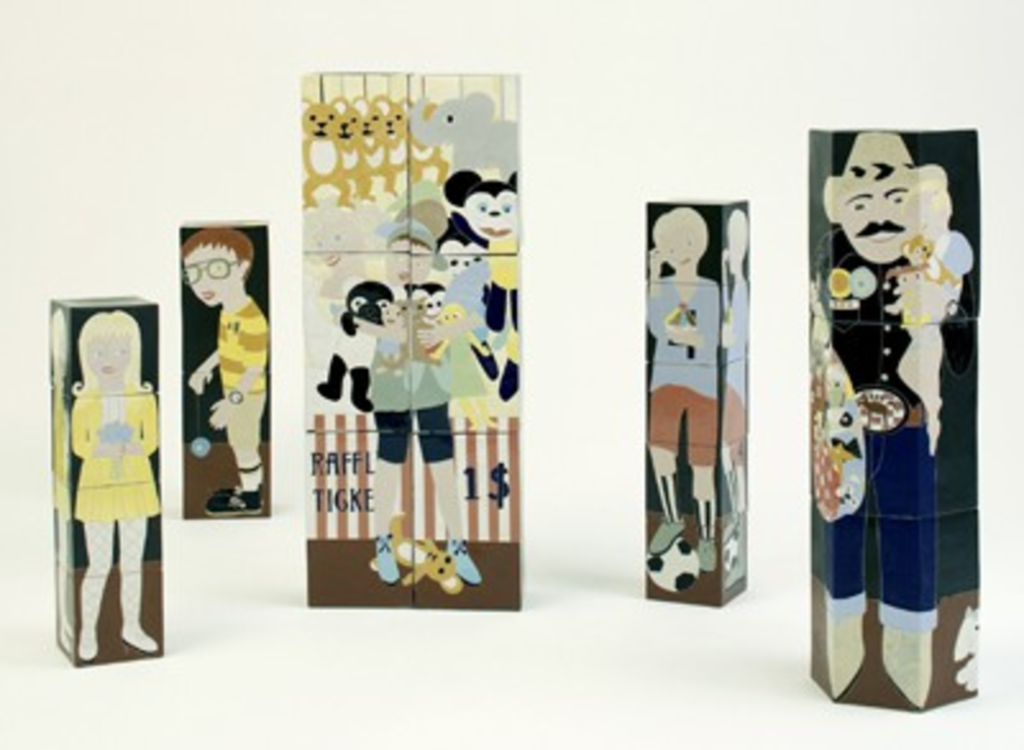 Freaks, sword swallowers, bearded ladies and other peculiar people brighten life on the midway. In contemporary art, work that’s carnivalesque suggests transgression, as well as people and cultures on the margins.

Unfortunately, nothing like that awaits you at Sherry Leedy. Instead, Gerit Grimm trips gently down a carnival lane populated by the most ordinary of friends and neighbors.

A German artist now based in Nebraska, Grimm created this installation while she was an artist in residence at the famed Arts/Industry program run by the John Michael Kohler Arts Center in Sheboygan, Wisconsin. Artists in the selective program typically make their work in the Kohler Co. factory’s Pottery, Foundry or Enamel shops.

Grimm created 2-D and 3-D vitreous china sculptures depicting wholesome folks at the fair. Referencing children’s books and illustrations, the installation plays with notions of storytelling and Americana. Children pose and dance and eat cotton candy. Grimm expresses these vignettes on stacked cubes and hexagonal shapes ranging from 3 to 6 feet tall. In “Carousel/Raffle Ticket Booth,” six rectangular glazed ceramic cubes show a child holding an armload of toys in front of a wall of stuffed animals. Elsewhere on the sculpture, a child rides a carousel horse. Grimm etched the drawings into the surfaces of the clay and then filled in the contours with flat areas of glaze, which resulted in a calm, cartoonlike effect. She repeats these stylized figures in flat wall pieces that resemble simple portraits.

The wall works are less satisfying than the sculptures, whose varied heights and shapes play against each other, enhancing the idea of a carnival. “Photo Boy” consists of four stacked cubes representing a boy taking pictures. Each side of the piece represents a side of the boy’s body, including the top of the sculpture where Grimm has painted the top of the boy’s head. It’s hard not to find the work pleasant, but it’s also hard to buy into work that feels so disconnected from contemporary events.

Perhaps it’s seeing the installation during a fearful time when the world’s economy is collapsing, but the whimsy tone here feels unnatural. Grimm’s work emerges from her childhood love of American culture — growing up in Germany, she experienced America through movies. Her nostalgia from the outside looking in is easy to understand, but may be difficult to appreciate from the inside looking out.

Also at the gallery is Lightsome Recall, in which six artists’ work in varied media suggests affinities for light and shadow. There’s an anomalous glass sculpture by Jun Kaneko and vintage platinum palladium prints by the late Mexican cinema­tographer Gabriel Figueroa, but the best of this work is photographic. Using a large-format, 8-inch-by-10-inch camera, Korean artist Koo Sung Soo shows highly saturated color images of odd yet everyday scenes, so finely detailed and lit with such intensity that ordinary things become extraordinary. Images from the aptly named Magical Reality series expose a variety of spaces. “Magical Reality: Tour Bus” is an interior shot of a motorcoach that’s been transformed through patterned royal blue slipcovers and curtains; the decorative overkill, bathed in a claustrophobic sea of blue light, turns the bus into an uncanny and cloying space. “Magical Reality: Wedding Hall” suggests a faux Versailles-like space that belongs in an ironic Las Vegas. The excessive ornamentation and thickly warm orange-yellow light has a nauseating and confining impact.