George Leonard Herter tells you How to Live With a Bitch 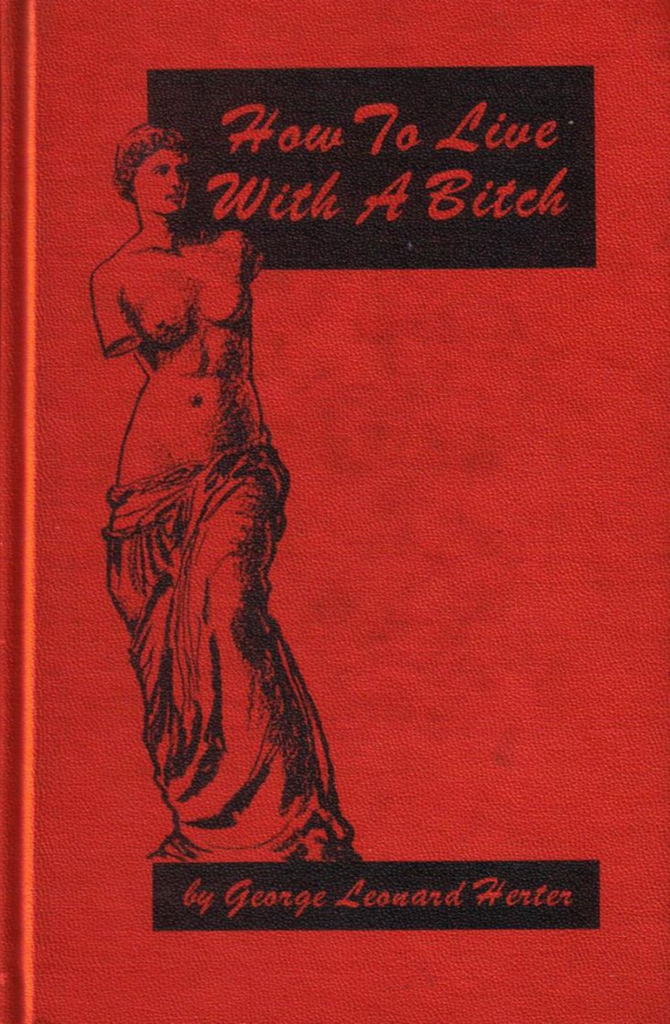 Title: How to Live With a Bitch

Discovered at: Half Price Books, Westport

Representative quote: “All facts show that many women have built-in traits to nag, bitch, insult, try to be cruel and try to be demanding. ” (page 59).

There’s crap, and then there’s bullshit.

The first 50 pages of this pioneering achievement in all-American jackassery decry the birth-control pill as “racial suicide”; claim that men are a fine wine, but women are whiskey: “The more they age, the worse they get”; and offer a terrifying caution: “Murder through continual stress situations is not difficult for some people. Watch out for this in selecting a mate.”

His body of work has enchanted critics at such niche publications as The New York Times (which refers to another of his books as “one of the greatest oddball masterpieces in this or any other language”) — an impressive notice for the man who gave us this pearl of wisdom: “The jeweled engagement ring is quite recent and was created by Jewish jewelers to sell more rings and jewels.”

That Times quote, from a warm appreciation by likable bookhound Paul Collins, refers to Herter’s best-known work, Bull Cook and Authentic Historical Recipes and Practices, a recipe collection justly celebrated on the better cooking sites for including “titty sauce yams.”

Even so, the shrill harangues of How to Live With a Bitch don’t square with Collins’ description of Herter as “a genius of straight-faced balderdash” and “a teller of tall tales.” And nothing else provokes Herter’s ire like women. For example: “There is nothing in the world so utterly disgusting as the woman who has used every trick in the trade all of her life to keep from having children, then wailing at menopause that she has no children.”

In a few passages, Herter lightens up a little.

“In the whole history of the world,” he writes, “only two women were able to become even fairly well-known painters. Some women can learn to play the piano fairly well. Well-known women cannot compose lasting music. Women are different in more ways than just sex. Women can hold their breath for 2-1/2 minutes and descend and work in water 45 feet deep, men cannot.”

Such jokes — if they’re jokes — only sweeten the poison. Collins glosses over his favorite misogynist’s mean streak by describing Herter as “a surly sage.” But if Herter was touched by a peculiar greatness, the dude was also a major prick.

Purportedly a marriage guide, How to Live With a Bitch opens with more than 20 dense, humorless, science-y pages explaining ovulation, pregnancy and the functions of the sex organs. The book closes with an alarmed report of new missile technology and a short story about Charles De Gaulle.