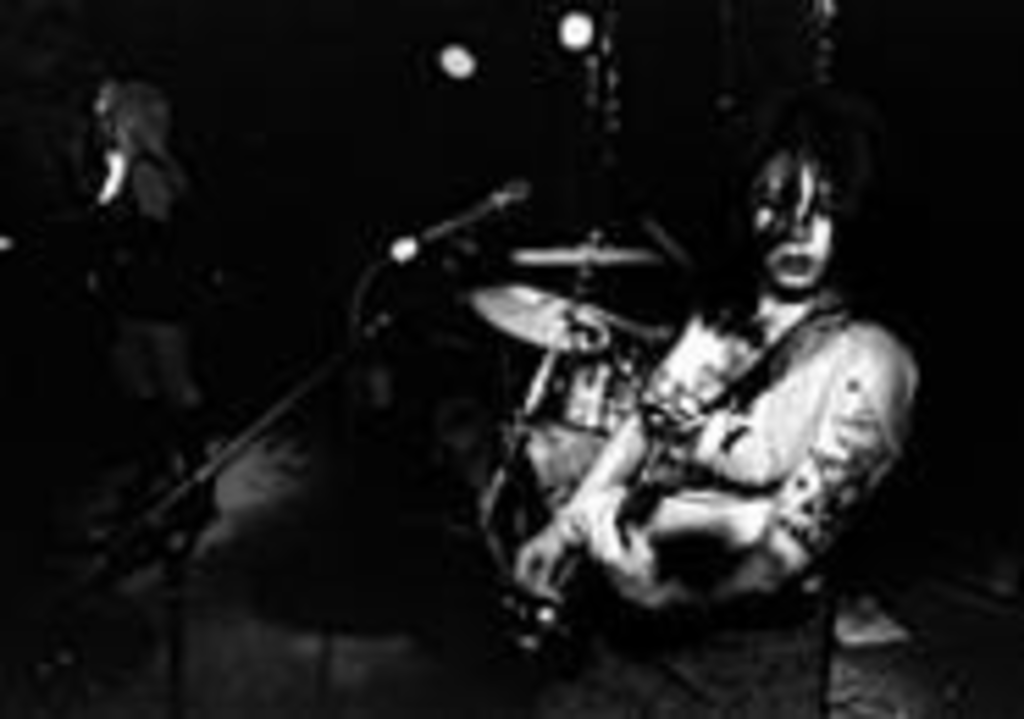 Don’t hate the Stretchmarxxx because its members are beautiful. Venus, by appearing nude and tattooed on the cover of the Last of the V8s’ debut full-length, became to local rockers what the Watson’s girl is to the hicks in the sticks. Camilla inspired unholy thoughts as a sinisterly seductive Pornhusker dancer before joining Drag Queen and Captain Howdy. We’ll give new drummer Brian Lynn the benefit of the doubt, despite never having seen him in action. For that matter, don’t despise them for drawing a big crowd to their heavily hyped first gig, which happened just three months after the band formed in June 2001. Or for engaging in tough-Love banter (“What’s up, sluts!” is Venus’ signature greeting) usually seen only at Courtney’s shows. And now that the band is considering plans to fly directly to New York and Los Angeles shows, bypassing the van tour that most Midwestern bands consider a sacred rite, there’s more reason than ever not to bear it ill will.

“I know it’s going to piss some people off,” Camilla admits. “A lot of musicians work so hard traveling from Omaha to Des Moines to Warrensburg to Peculiar, and la-di-da, we are going to fly to L.A. and New York, but why not?”

Those preparing to answer Camilla’s rhetorical query at length should know that there’s some planning behind the proposed trips. Toast, a booking agent for all-women acts such as Evil Beaver and Fabulous Disaster, has found the Stretchmarxxx a tentative home at The Garage, a modest-size L.A. club that regularly hosts obnoxiously loud guests. Hank’s, a small-scale East Coast establishment, has also expressed interest in the group’s screechy sludge. The band members will travel light, borrowing equipment from area acquaintances upon landing and not needing much suitcase space for their skimpy stage attire. With two guaranteed shows lined up and the expense of a few plane tickets paling in comparison with the cost of a van and the inevitable repairs it will need on its first cross-country trek, why not, indeed?

Well, say tour traditionalists, for starters, a group must conquer its own city before infecting other areas. Release a few discs, work up to weekend shows at the biggest live-music venues, batter down the barriers at local rock radio and then take your impressive résumé, bulging press packet and recorded material on the road.

The Stretchmarxxx’s four-song demo is an impressively produced and alarmingly accurate reproduction of the group’s raucous rawk, grating grunge and pissed-off punk. The band has played roughly fifty shows, often as a support act. (The Stretchmarxxx open for Hydrafader and Shotgun Idols at The Brick on Saturday, August 24.) They’ve drawn erratically, though recent shows have attracted a steady flow of fresh fans. Radio isn’t relevant; to approximate the group’s sound using a band currently in heavy rotation, you’d have to play the Hives at the wrong speed and drown out the Chipmunks-style vocals with feedback fuzz. Name recognition-wise, the group ranks in the middle of the pack, behind institutions such as Shiner and Ultimate Fakebook.

However, the group tends to elicit much stronger reactions than other, more innocuous contenders in its weight class. Camilla attributes lingering resentment to the publicity blitz surrounding the first Stretchmarxxx show, a campaign waged by the band’s short-lived lead singer, Stasia. “She was a social butterfly, and she really went into the trenches to promote that show,” Camilla recalls.

When the group dumped Stasia after its auspicious debut, Camilla and Venus, formerly the squealing half of a Las Vegas crust punk band with male/female vocals, took up double duty for the first time. Though both have made noticeable strides since the band’s early performances, they still use defense mechanisms to deal with the playing-while-singing issue; Venus finds cacophonous notes and holds them while belting; Camilla lets loose between verses. Still, anonymous snipers seized on the group’s slip-ups and snarled that it should’ve spent more time in the practice room before its highly public unveiling. Anti-Stretchmarxxx graffiti popped up in the restrooms of local clubs, and fliers were frequently vandalized.

“I ignore controversy,” Venus responds. “I laugh at it. You have time and energy to think about me, and I have no idea who you are. If people are gonna be envious or talk controversial about us, they’re not doing enough for themselves or they’re too lazy.” Instead of paying attention to the Stretchmarxxx, Venus recommends that jealous musicians hit the road. “It’s good to have a home base, but it’s better to get exposure everywhere else,” she advises. “If you just stay in KC forever and don’t do anything about it, you’ll get no exposure or recognition.”

Venus also makes no apologies for her audience abuse. “I’m really aggressive toward the crowd, and they eat it up,” she explains. “I’ll yell at people, and if someone in the audience pisses me off, I’m not going to let it pass. People love that kind of stuff.”

Camilla is even more irreverent, making casually candid comments (such as her riffs on Osama bin Laden at a show soon after 9/11) that might incense bystanders but haven’t inspired any clubgoers to confront the band. “If people were going to give me feedback to say our show’s too crazy, they’d be too embarrassed, because they’re traditional, not as audacious and bold as I am,” she says. “It’s rock and roll, you know.”

And there are signs of a reckless rock revolution, one led by the Last of the V8s, a band that breaks stuff stadium-show-style without a major label to foot the bill; the Gadjits, a group of remade garage enthusiasts who sweat more now than they did while wearing bulky suits as a mid-’90s ska sensation; and Cretin 66, whose savage sounds smack spectators silly. These groups aren’t afraid to interact with their crowds, to preach onstage about rock without irony, to hang with punks and sleazy speed-metal mulletheads alike. The Stretchmarxxx can’t compete with these veterans in terms of faithful following or technical prowess, but they can take to the coasts spreading the scene’s gospel. Think of it as a hellaciously noisy singing telegram, an impossible-to-ignore reminder to anyone who attends these gigs that KC can hold its own when it comes to trashy riffs and attention-grabbing antics.

“I don’t want to offend people, because all my friends work really hard to travel,” Camilla says cautiously. “There’s no easy way to get signed, but maybe we’re looking for something easier. The traditional way of going to all the Midwest cities is respectable and valid, but we have this opportunity that we’re open-minded about.” She pauses, then again poses the definitive Stretchmarxxx question: “Why not?”