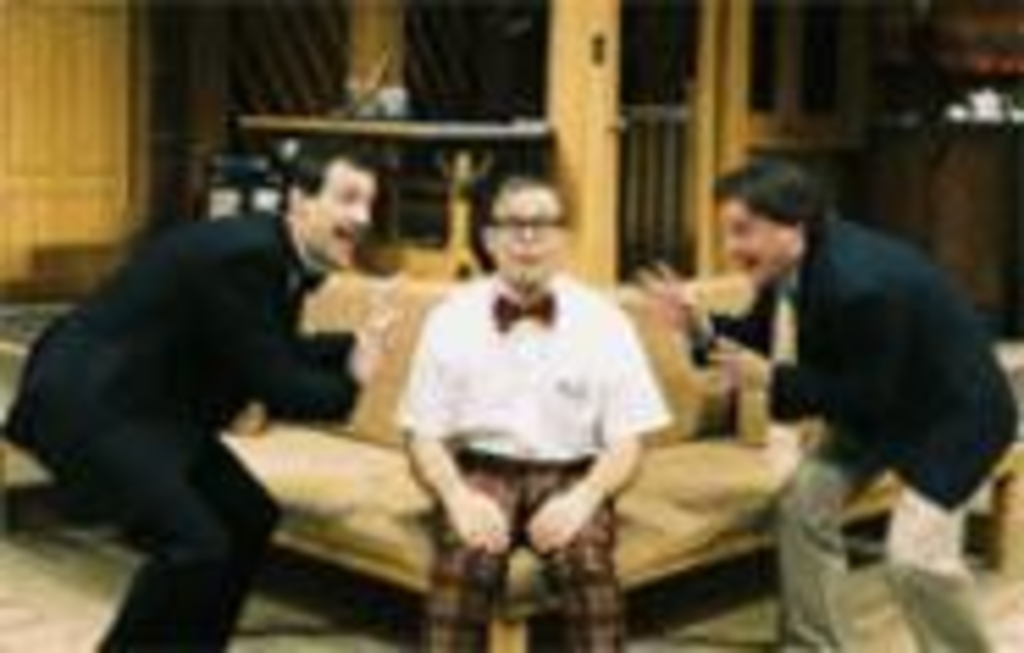 The meek have inherited the earth.

The Hollywood chunk of it, anyway. In our entertainment culture, geeks have achieved such power that our sympathies are consistently directed to them. At the end of a thousand ’80s movies, when the football hero is knocked into a pool, a pile of manure or the bosoms of the dean’s wife, we cheer; even better is when, just as everyone at the prom/graduation/bikini contest is pairing off with an ideal mate, the geek spots a woman of identical geekiness who might as well be him in drag. Today, whether it’s Spider-Man, Harvey Pekar or Elijah Wood’s so-dewy-he’s-damn-near-a-wetnap Frodo Baggins, we savor the ascent of the lily-livered.

Burdened as I am with all of the era’s geekiness, I suspect I’m not the ideal audience for the American Heartland Theatre’s revival of Larry Shue’s The Nerd, an implausible comedy hailing from the predigital dark ages before mainstream nerd acceptance. Shue’s nerd is played with a bray and a snort by Ken Remmert, crammed into checkered pants. He’a monster of annoyance, a chalk-factory supervisor who bangs on a tambourine, obeys no social niceties and turns most introductions into grating “Who’s on First?” routines.

Setting this apart from most nerd narratives is that playwright Shue has no sympathy for this character. In fact, Shue presents the act of Angrily Casting a Nerd From Your House both as a key step toward self-realization and the solution to all of life’s problems. The Nerd is Birth of a Nation for geek haters (which is pretty uppity for a play directed on Broadway by Charles Nelson Reilly).

Shue’s nerd is a fussy, belligerent bore, but the show isn’t entirely. Enough punch lines snap that I certainly laughed my share, especially at Ron Megee, whose years of crafting Late Night Theatre’s intentionally bad one-liners have prepped him to deliver the real thing. Del Unruh’s set — the sunny living room of an architect — is lovely, equal parts Frank Lloyd Wright and Nick at Night.

Megee is just one of my favorite KC actors knocking himself out to keep this watchable. As the good-natured architect who invites the nerd into his home, Craig Benton is grounded and believable, even during the spit take. Twice he’s given long, goofy spiels packed with two-bit absurdism; Benton pounds them into full-bodied monologues, each with real laughs and feeling. Kip Niven, as the hotel magnate who employs the architect, plays an excellent plutocrat. Here, as in last month’s farce with a brain First Person Singular, it’s a pleasure to watch Niven’s captain of industry lose his dignity. That he looks as if he emerged from the womb with a monocle screwed into his eye makes it easier.

Actors can only do so much, however. In this show, everything is subordinate to the laugh, including character and sense. Anyone in The Nerd (or The Foreigner, Shue’s other popular comedy) is, at anytime, capable of epic imbecility if it will keep a joke going. If Character A hides behind the ottoman, all other characters lose their peripheral vision until just the right moment. If Character B proposes a ridiculous lie to scare off Character C — Willum turns into a were-pig, for example — all other characters agree to it, act it out sitcom-style and work themselves into a frantic pitch, only to see it all backfire.

When the jokes work, none of this matters. Too bad, then, that so much of the made-for-TV banter here is as sharp as a wet Frito. Yes, the crowd laughs a lot, but mostly just at the big climaxes, when the actors have bags on their heads and are poking each other’s eyes out. Unfortunately, it takes a long time to set up putting bags on heads, and each act opens with long spells of dead air. (I feel for Megee, who plays a bitchy theater critic and fights heroically to get laughs from lines such as “Pretentious? Moi?”)

For most of the crowd, the payoffs were enough. The obviousness of some of Shue’s punch lines upset almost no one; in fact, some of the more ginned-up theatergoers took to calling out the jokes before the actors got to them.

Loutishness at a play is inexcusable, of course. But it’s a testament to the Heartland that it happens. The shows are convivial, the atmosphere friendly, and intermission practically a happy hour. The audience wasn’t rude so much as participatory — the show at times verged upon karaoke.

During a long dinner-party scene, the characters played a round of I’m Going on a Trip, that schoolyard memorization game in which you take turns listing an item to lug along on a vacation and must remember what everyone else has said. Once the list had grown unwieldy, Licia Watson’s character — the wife of the hotel owner — struggled a bit. “I’m going on a trip,” she said, “and I’m bringing an apple, a basket, a cucumber, and — ”

She glanced around, her character both bored and exasperated, and stammered a little more.

“A duck!” shouted some drunk two rows over from me.

Watson, the pro, didn’t look up.

“A duck!” yelled a second member of the audience.

Best I can say for The Nerd: You might care enough to holler out some sort of waterfowl.