Over 74,500 tickets were sold to Saturday night’s Garth Brooks concert at Arrowhead Stadium—a venue record for any non-football event—and despite a recent uptick in COVID cases in the Kansas City metro, it seemed that nearly every ticketholder was in attendance.

It makes sense. The Oklahoma country superstar, whose American record sales are rivaled only by Elvis Presley and The Beatles, has a long and intimate history with our town. During his two hour performance, Brooks paused to remember the nine sold-out Sprint Center (now T-Mobile Center) shows he played the year it opened, how the live debut of his hit “Friends In Low Places” occurred in Kansas City way back in the day, how his mother was born here, and that roughly a dozen members of his band and crew are from the area (all of whom he introduced by name and brought out on stage, if they weren’t already there).

While it is to be seen if the event will qualify as a superspreader as some have speculated (it was the largest gathering Kansas City has seen since the pandemic began and only a small percentage of attendees opted to wear a mask), Brooks’ personal message to fans, played on video boards before the show, was admirable: don’t look at anyone funny for wearing or not wearing a mask and treat others with kindness and patience.

If I still need to spell it out for you, Brooks is an extremely lovable guy—the type you wish was your uncle or your youth pastor (but not the type of youth pastor that’s trying too hard to be cool and relatable). Brooks is cool and relatable though. The former because he appears to be acting his authentic self at all times and giving his fans every ounce of energy in him; the latter because he is essentially country music’s #1 everyman.

Following a five-minute video board countdown clock, Brooks’ band took the stage and a voice on the PA said, “Alexa, play Garth Brooks live at Arrowhead.” This moment of brand partnership with the world’s largest e-commerce company was so ridiculous that I had no choice but to laugh.

The band quickly got to playing “All Day Long”—a romp from his 2020 album, Fun. Primed and ready to go, the crowd erupted with applause as the drum riser was lifted into the air and Garth emerged from beneath it.

This opening number was one of only two newer songs performed (the second of which, “Dive Bar,” was one of the night’s duller moments) in a set that was packed with selections from his catalog of hits and a handful of covers. Just as impressive as his setlist was Brooks’ command of the large, square stage that sat at about where the 20-yard line would be on one side of the field.

For a heavy-set man nearing 60-years-old, the get-up-and-go he showed (with the help of his headset mic and cordless acoustic) on songs like the Oak Ridge Boys’ fiddle-friendly “Callin’ Baton Rouge” and the encore-closing barnburner “Ain’t Goin’ Down (‘Til The Sun Comes Up)” was a thrill to witness, making sure fans on each side of the stage got equal amounts of face time with him.

Brooks seemed just as thrilled to be there as any superfan may have been. At two different junctures he alluded to how much he needed this night and that he’d been in some sort of funk lately, but by the evening’s end, sweat flying off his face, his hands as windshield wipers, he’d “never felt so free.”

After many a song, Brooks would push away his headset microphone and howl with joy, arms spread wide, as in “isn’t this wild?” (I would attend his hypothetical megachurch). As if that wasn’t enough to bring a smile to a fan’s face, the show included the most artist-crowd interaction I’d ever seen in an arena/stadium setting. He played multiple requests written on fans’ signs, dedicated one song to a cancer patient in attendance, another to a newly engaged couple, signed a guitar for a pair of siblings at their first concert, and shouted multiple happy birthdays, at least one coming mid-song.

Nearly every song in the blowout performance was worthy of analysis, but I’ll give you a lightning round here. The final vocal note Brooks held on “The River” illustrated that he may not have a pretty voice, but rather a powerful one. I couldn’t imagine a better setting for the moody arena-country rocker “The Thunder Rolls.” “Unanswered Prayers” remains a thoughtful and touching meditation on faith, no matter how you practice it. The first few minutes of “Friends In Low Places”—one of Brooks’ biggest hits and an old favorite of Royals fans far and wide—were unadulterated jubilation for all parties involved in the massive sing-along.

However, by the time Brooks came to the song’s live-only third verse and extended outro, it did seem to reach the point of overkill.

One brief but distasteful moment came when Brooks commented on the noise level of the stadium and what it must feel like to play football there each week. Several thousand crowd members began to do the Chiefs’ tomahawk chop and war chant. Hearing the commotion, Brooks looked out on the crowd and motioned for them to make more noise. I’d like to give him the benefit of the doubt, but the fan tradition is pretty widely known and Brooks almost certainly knew what he was encouraging.

Before the aforementioned “Ain’t Goin’ Down” finale, Brooks was joined on stage by his wife, singer Trisha Yearwood, for a wholesome cover of “Shallow” from the soundtrack of A Star Is Born, which concluded with the duo slowly approaching each other and gripping each others’ hands for the final line (followed by a quick kiss—cinematic and cute). Brooks was also granted his request for his favorite Yearwood song, “Walkaway Joe.”

It’s clear that after 30 years, Garth Brooks and Kansas City are still crazy about each other, too.

The show began with a surprise opening set from Martina McBride. McBride told fans that she’d received a call from Brooks on Tuesday asking the Sharon, KS native if she’d like to play. She said it felt like a full-circle moment considering her first tour after signing her first record deal was supporting Garth. Diva country banger “This One’s For The Girls” gave women of multiple age demographics the opportunity to dance, sing, and feel seen. The rest of her roughly 20-minute set felt bland by comparison. 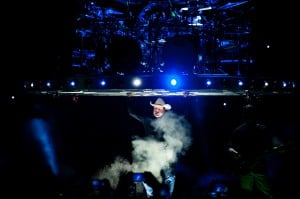 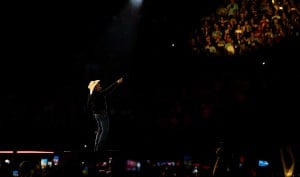 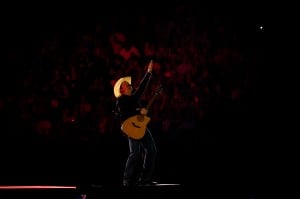 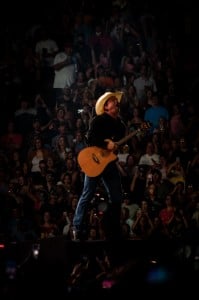 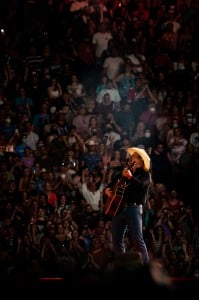 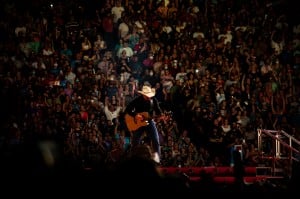 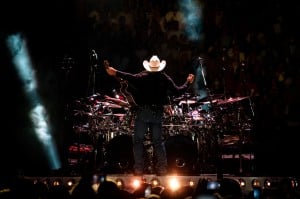 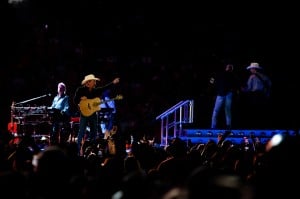