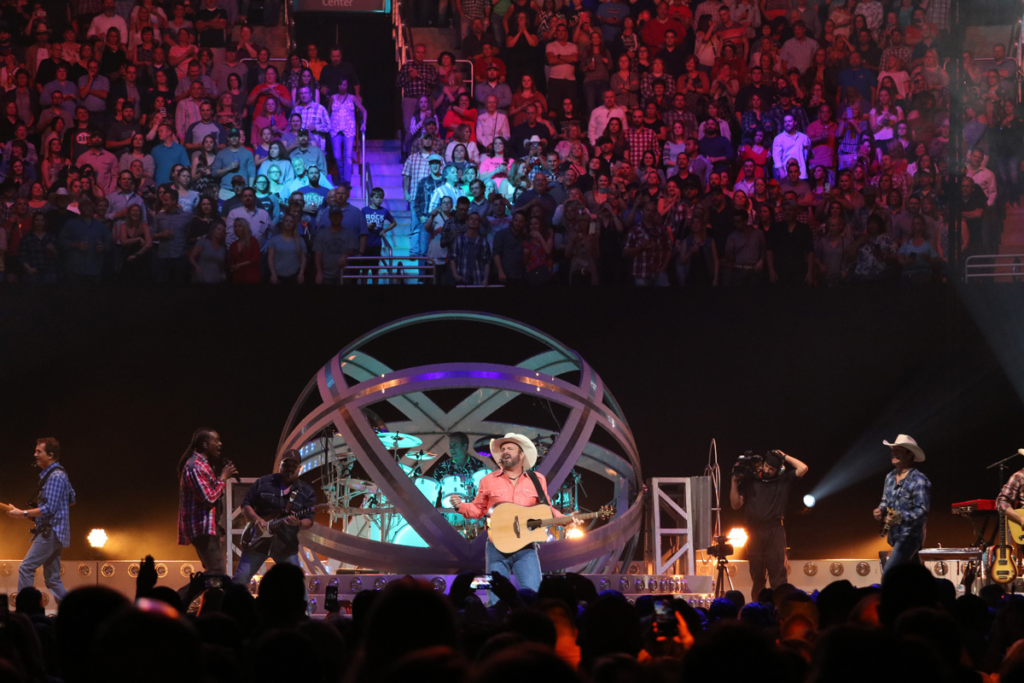 A banner in the rafters of the Sprint Center commemorates the shows Garth Brooks played here a decade ago. Shortly after the arena opened in 2007, the 160,000 tickets for Brooks’ nine-night stand sold out in less than two hours. The current run might not be as epic in terms of numbers, but one can safely say that seven sold-out gigs for the country superstar is a solid testament to his perennial popularity. 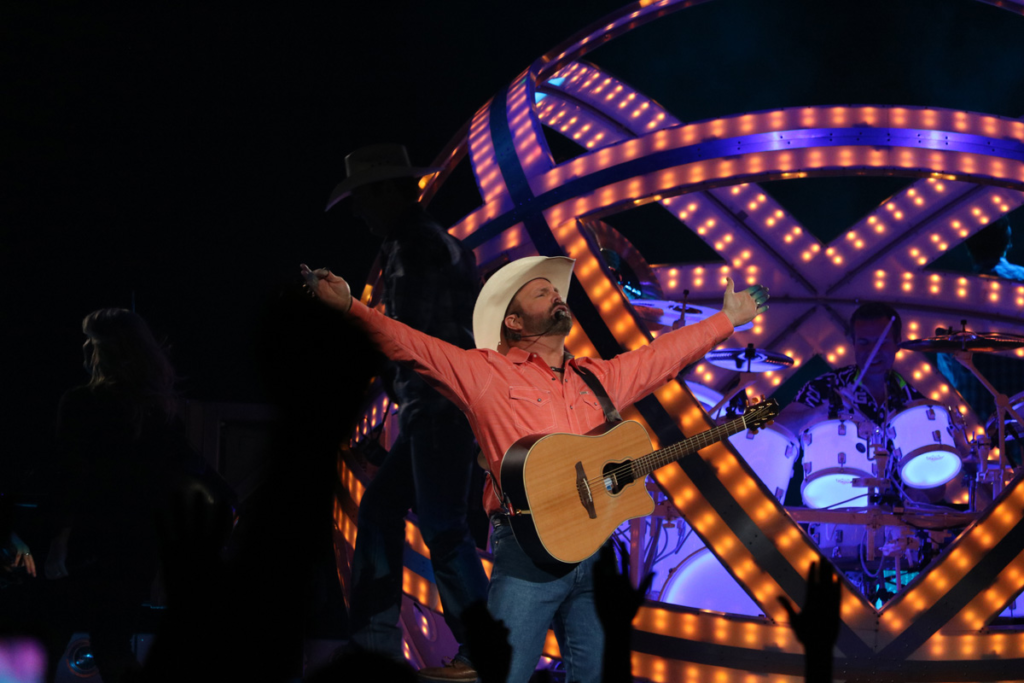 Brooks’ last No. 1 hit was nearly 10 years ago, and his heyday was arguably a decade before that, but when you get the chance to see the best-selling solo artist of all time on a Friday night, you don’t think about relevancy — you just make sure you have beer money and still know all the words to “Rodeo.”

“You never do two ballads back-to-back, but I gotta hear more of that,” Brooks said to the crowd after “Unanswered Prayers,” before going into the Bob Dylan-penned “To Make You Feel My Love.” “Prayers” had been a massive sing-along, and that’s what this show was: Everyone knew every word, and the wash of sound from the crowd was every bit the equal of — if not the victor over — the stage show. Hell, Brooks conducted the audience like an absolute master at one point, and the roar fairly rivaled metal shows I’ve experienced from directly in front of the stage. 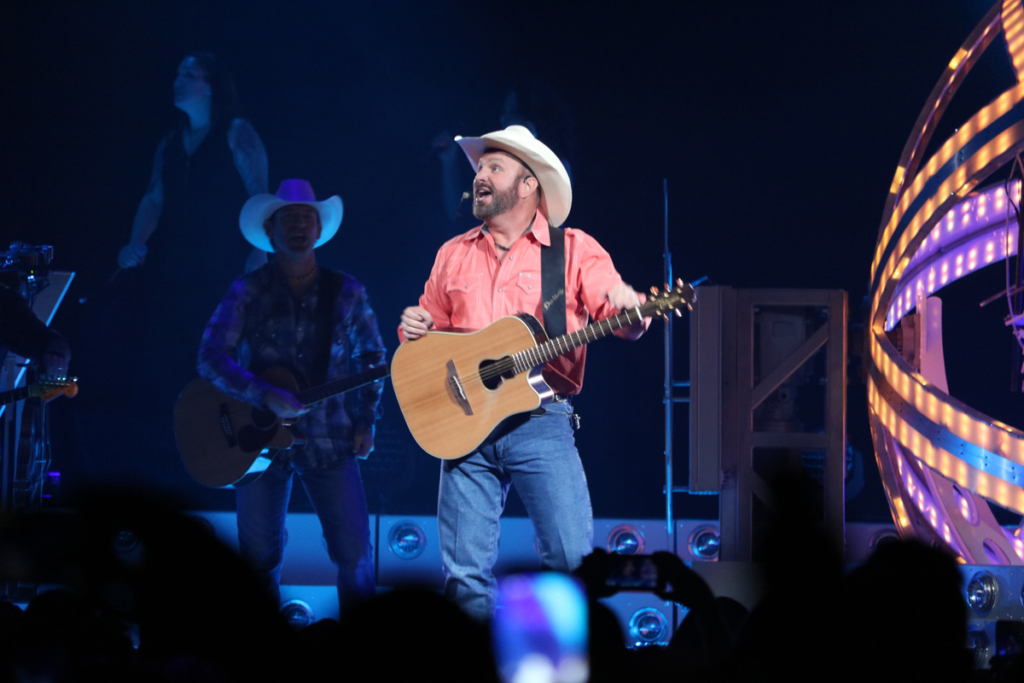 Garth Brooks is a man who loves his job. As my wife stated, this is a man who is genuinely befuddled and delighted by the response he gets from his audience, and he’s actually happy to stand up there and sing his songs. The face-splitting grin Brooks sported throughout the show was for real, and you could just see how thrilled he was to be onstage, playing music.

“We play cowboy songs, drinking songs, love songs — and you treat ’em all like equals. If you traveled hundreds of miles to hear this song, we hope it’s the best we’ve ever played it,” the musician said. And then Brooks played “The Thunder Rolls,” the Bon Jovi-leaning power ballad he said had been a slow-burn success; given the response, you’d think it was his biggest hit. Factor in the lighting, a video screen showing rain, and the smoke machine, and it was a showpiece in and of itself. It could’ve been a new song, and the verve and passion could’ve won over the crowd, it was so powerful.

Trisha Yearwood came on halfway through the set, and I think my wife and I were just as excited for her. She was a treat, but her set was far too short. Introducing “How Do I Live” as being “from a little movie called Con Air,” and “expecting big things, Kansas City” was delightful. Can she come back and do a show of her own, please? Singing a verse of “The Song Remembers When” to an audience member with a sign was absolutely emotional, and her Kiss Cam disclaimer was gold — suggesting that people who were there with people they weren’t supposed to be there with maybe go get a soda or use the restroom. As long as she brings her bejeweled microphone, we’ll have her back anytime. 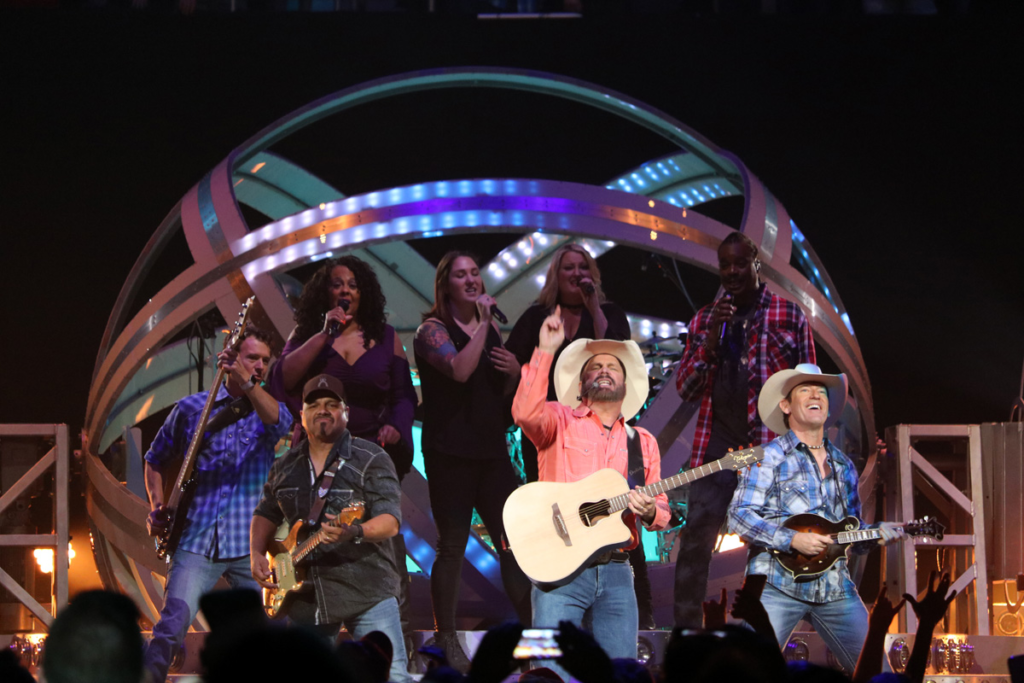 Brooks came back out and proceeded to play more of his sing-along country-pop gold — “Friends In Low Places” didn’t need the star at all, with the entirety of the arena eager to take over — before leaving the stage. He’d come back and encore with a selection of acoustic covers of some of his influences, such as George Strait and Merle Haggard, before once again being joined by Yearwood for a couple of exceptional duets (seriously, can she come back, please?). It all culminated in a stirring take on “Standing Outside the Fire,” before sending the still-excited crowd into the night.

Regardless of your feelings on pop-country, Garth Brooks is a consummate showman whose songs you know, even if you think you don’t. I haven’t listened to the country star regularly since he was a radio staple, but I found myself singing along to cuts that went all the way back to when I was in elementary school, like they’d been a hit the day before. He’s doing several more shows, and while they’re sold way the hell out, snag a ticket if you can. You’ll be happy you did.

Baby, Let’s Lay Down and Dance

The Beaches of Cheyenne

Ain’t Goin’ Down (‘Til the Sun Comes Up)

Make You Feel My Love

Ask Me How I Know

XXX’s and OOO’s (An American Girl)

How Do I Live (LeAnn Rimes cover)

The Song Remembers When (snippet)

She’s in Love With the Boy

Fightin’ Side of Me (Merle Haggard cover)

Much Too Young (To Feel This Damn Old)

Standing Outside the Fire