Garry Noland wraps up his Studios Inc. residency with some strong material 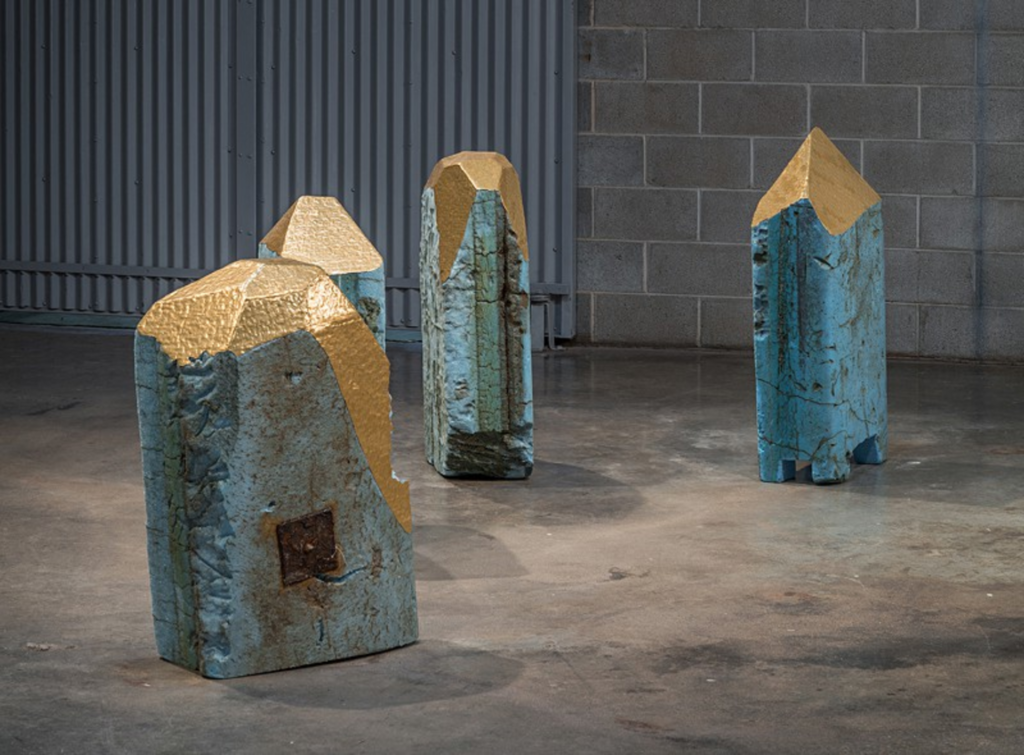 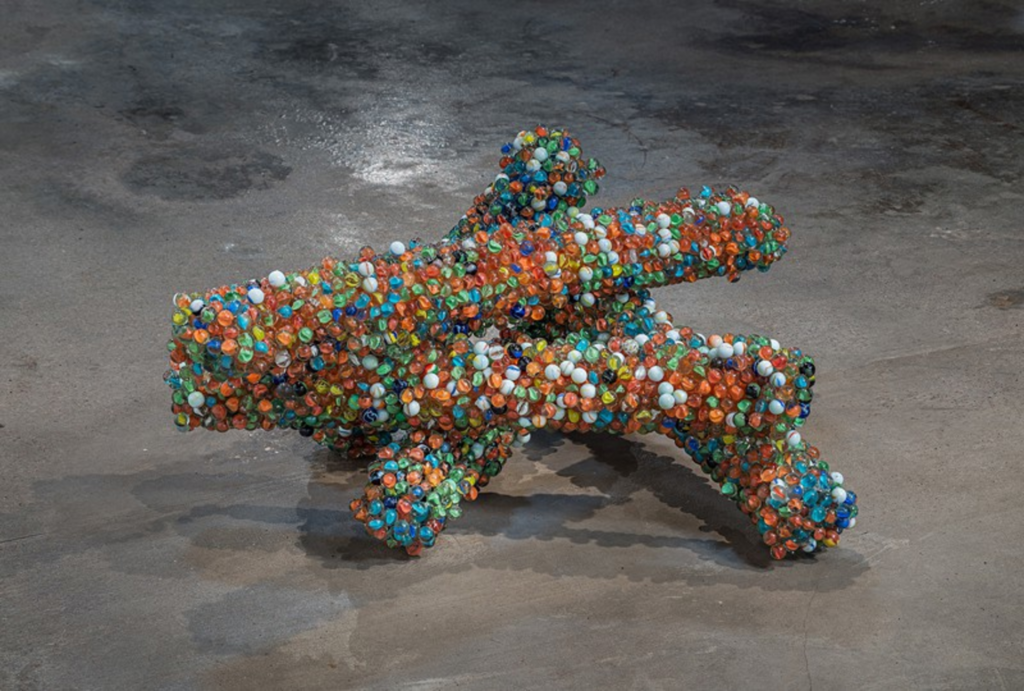 Garry Noland strikes you as a man with a positive outlook. His personality is unaffected, his wit rustic and colorful. What comes across when he speaks about his art is a straightforward “I made this” aesthetic.

Speaking to a small audience the Saturday after the November opening of Test Patterns and Floor Samples, his latest Studios Inc. exhibition, Noland said no material was unworthy of being manipulated toward its true end. That idea informs what he calls his “automatic sculpting,” an art practice that he has evolved over 40 or so years of work.

“Sometimes I’m boss of material,” Noland said. “Sometimes it’s the boss of me.”

He told the gathering that morning that what we see in this show — his last at Studios Inc., now that his three-year residency is up — is a function of what happened physically in his studio, a space large enough to allow him rich processing time. But not too much time. There’s an immediacy to the painterly sculptures — three-dimensional collages, really — that he has assembled over the past year. Noland finds the things he uses, but he doesn’t like to let any linger long.

“I try to use materials in front of me as quickly as I can,” he said.

The materials he has used this time came to him in a literal way, much as parts of the floor inside 1708 Campbell made their way into the tape tapestries of one of his previous projects. People like to dump refuse across the street from his studio, by an embankment off U.S. Highway 71. And Noland helped himself.

The latest creations are made of weathered blocks of flotation foam, long pipes and thousands of dime-store marbles. These put-togethers of industrial materials, including rolls of Bubble Wrap like you’d find in a shipping warehouse, are scattered about the gallery. They fit in with the space’s cinder-block walls and big metal doors, and they seem a little forlorn as you look down on their perch on the mottled concrete floor. They lie there, frozen with inactivity.

Their industrial origins notwithstanding, the works in Test Patterns and Floor Samples aren’t meant to be functional. Still, they suggest a stripped-down efficiency in their forms, assisted by the basic titles that Noland has assigned each piece. “Cord,” for instance: The chunky, marble-encrusted cylinders make you imagine an unordered stack of firewood logs.

Each of the three pieces that share the name “Swab” is in fact swablike, a Q-tip for a giant. Orange-plastic conduit tubes are capped with a cluster of marbles. At the other end of the pipes are big wooden spools, each loaded with a roll of Bubble Wrap instead of with cable. The way the pipes are curved, the way Noland has propped them up by stands to keep the marble tips from leaning down onto the floor, makes them seem a little pitiful.

Elsewhere, a slab of faded orange foam, crusted with gray patches of unknown “natural aging,” sports a 5-foot-long mouse tail — another pipe form completely covered in marbles. There it is, just lying there. It’s difficult to look away.

The stands provide visual action; there’s a tension in watching the swabs rest so precariously. A tiny stand also keeps “Pumpjack (Cravat)” in perfect balance, and you notice that it’s real wood covered in wood-grain contact paper. Noland is hinting back to his tape paintings, perhaps, or giving us a little note about mundane materiality.

“Pumpjack (Cravat)” sits across the gallery from its mates, pumpjacks called “Sash” and “Clot,” which carry greater weight due to being paired and held up by the wall. Each is a tall monolith of foam with an impressive black metal pipe swooping from the back. They have cascades of marbles “painted” onto them; “Cravat” is shaped in a necktie formation, and the other two titles allude to the general shape of their respective clusters.

As with the swabs, these things force you to imagine how easily they could topple over. The contrast between weightless foam and heavy iron and glass is made more complex by the way the lighter material, from a distance and even up close, looks like stone.

Noland is not coy about any of this art. If he has altered any of the rocklike bases, he has made only minute changes. They are not painted or chiseled. But, glittered with pavé marbles, the float-away Styrofoam takes on visual sparkle and literal weight, and it becomes intriguing enough to command our attention.

The most engaging foam-based work here is “Failed Monument,” a grouping of four little free-standing “buildings” made of blue Styrofoam that Noland picked up at the Lake of the Ozarks. We see in them erosion and stains and, in one case, a rusted metal bolt, signs of aging and decay. But Noland has adorned these stumpy, peaked obelisks with shiny gold foil, letting them make their claims of value and showiness. It isn’t hard to read “Failed Monument” as Noland’s commenting on economic crisis and disparity, on temples to false idols, on the futility of some human constructs.

Answering “Failed Monument” on the far wall — a short wall that provides the longest perspective and the best light in the gallery — is the only work not sitting on the floor. “Test Patterns” is a pure visual exercise: 17 silver shapes, all angles and folds, made out of wood covered with shiny bits of metallic “shingles.” The three-dimensional shapes flatten out trickily, depending on your distance from them, and they look as if they could unfreeze and start dancing around at any moment.

At 60 years old, Noland says he feels almost like he’s 25. He likes to listen to baseball, football, ice hockey and other sports while he works and says there are similarities in sports and art. In the maxims he repeats, anyway, there’s a commonality between the two pursuits: You can’t rest on laurels but have to improve day to day. Artists must be willing to work all the time to stay at the top of their game. And there’s a lot of competition.

“If there are 100 artists here, there must be thousands in New York, Berlin, etc.,” he said. Keeping up, for Noland, is about process, about always working and following an aesthetic trajectory to something new. “I would not have been able to think about these things three years ago,” he said. “I’m excited about the next three.”