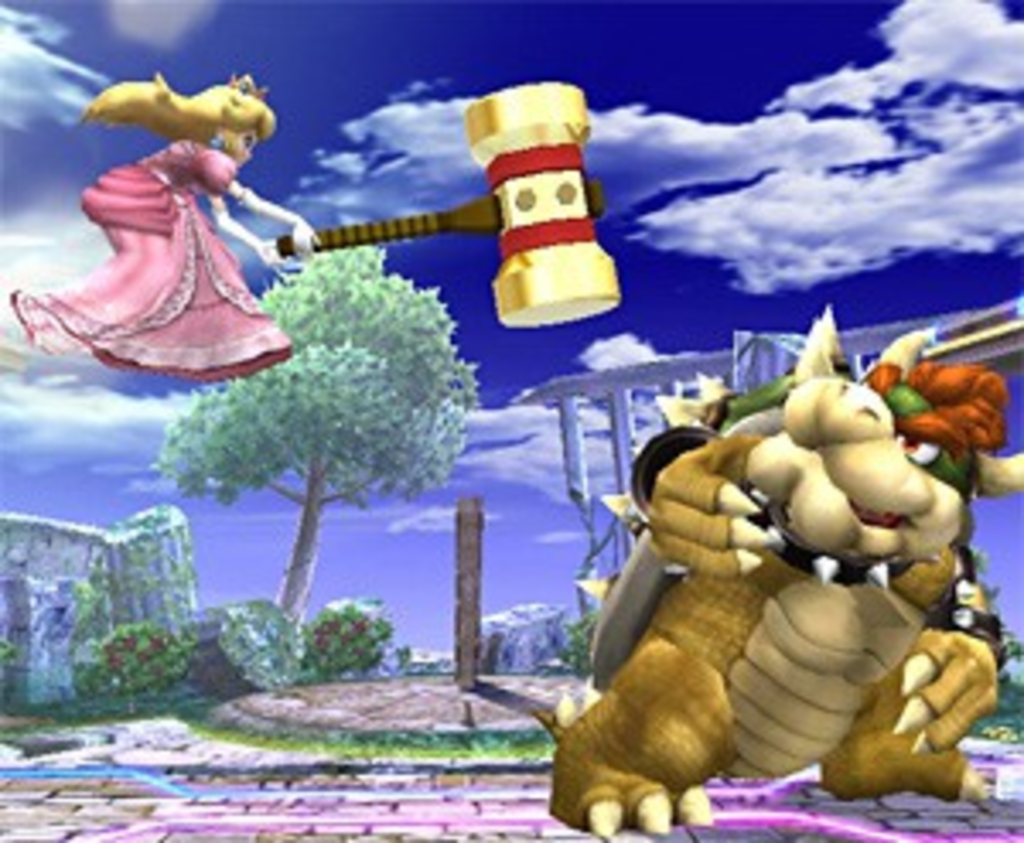 Sometimes it’s the terrible ideas — say, a TV show about nothing, or stirring corn into your mashed potatoes — that turn out to be genius.

Super Smash Bros. landed on the Nintendo 64 nearly 10 years ago, kicking off a concept that initially sounded nauseating: “lovable Nintendo characters in a fight to the death.” Seriously? Jigglypuff vs. Yoshi? There are episodes of Sesame Street more brutal than this.

But the game — and its multimillion-selling follow-up, Super Smash Bros. Melee — ended up among the hardest-hitting, most expertly crafted titles in Nintendo’s arsenal, a pleasant surprise for hard-core fighting-game fans and casual players alike. Now, after multiple delays, Super Smash Bros. Brawl has finally bludgeoned its way onto the Wii, and everyone wants to know: Was it worth the wait?

Does a Donkey Kong crap in the woods?

Nintendo has a nasty habit of rehashing its tried-and-true titles, and Brawl is no exception. At first, you’ll curse Nintendo for delivering a game that’s almost exactly like Melee; it even has the gall to ditch the Wii’s motion controls entirely. But damn it all, this game is nearly perfect anyway. There’s no staying mad at you, Nintendo.

Every Melee mode returns here, with the core four-player free-for-all — featuring 37 playable fan favorites, from Kirby to King Bowser — taking center stage. As always, the idea is to launch your opponent into the stratosphere, using kicks, anything you can grab (bombs, baseball bats), and flashy new “Final Smash” moves.

If you’re without friends and/or are a terrible parent, the one-player mode will keep you busy unlocking new content for months — nay, years. There are hundreds of virtual trophies and stickers to collect, fighters to unlock, a level creator, 50-plus “Challenge Mode” missions to complete . . . even playable demos from Nintendo’s classic library. Finally: A game that backs up its $50 price tag with a ridiculous amount of sheer stuff to do.

You might begin Brawl’s “Adventure Mode” thinking you’ll breeze through it as you did in Melee. But after nine hours or so of breathtaking and whimsical cut scenes, epic fights, and character level-ups, you’ll realize you thought wrong. Adventure Mode this time around is staggering, an event unto itself. Who knew a team of adorable Pokémon and hard-ass Metroid characters would feel like a blockbuster movie?

Some annoyances appear in online mode, which stinks like Wario’s ass-crack. Playing with friends requires Nintendo’s requisite “16-digit friend code” (with no live chat), and brawling with strangers means staring forever at a pre-fight countdown screen while you practice moves in an all-white existential void of a waiting room.

All this, and the matches themselves last only two minutes — making Nintendo’s primitive Wi-Fi service excruciating and unforgivable. Who’s the goombah that designed this junk?

Online gripes notwithstanding, Brawl is an utter celebration of gaming itself. Each character is a time-tested icon, and each battle stage ushers in a flood of whimsical memories. If this is any indication, Nintendo’s “if it ain’t broke” formula for sequels isn’t going anywhere soon. But with a game this fantastic, should anybody really care?